Montblanc had dropped a new addition to the Geosphere family at Watches And Wonders 2022 – the 1858 Geosphere Chronograph 0 Oxygen LE290! For its new Mark Maker Nimsdai Purja’s impending trek to the summit of Mount Everest, Montblanc removes the oxygen from its latest climbing timepiece. Montblanc’s latest 1858 Geosphere watch features a brand-new chronograph mechanism that is oxygen-free, making it ideal for today’s explorers. This “Zero Oxygen” clock has various advantages for adventurers who need their gear to work in the most extreme conditions. Zero oxygen inside the movement minimises oxidisation as well as fogging, which can occur with dramatic temperature variations at altitude. All of the components will survive significantly longer without oxygen and will deliver higher precision over time.

Each timepiece comes with a certificate stating that the watch has been successfully encased without the use of oxygen. Each timepiece is subjected to the Maison’s severe 500-hour test in addition to the certificate. But Montblanc wanted to go even further, so they sent the new 1858 Geosphere Chronograph 0 Oxygen LE290 on an actual mountaineering adventure to Mount Everest, the world’s highest peak above sea level.

But who would be willing to take up the challenge? The Maison sought advice from its Mark Maker, famed alpinist Reinhold Messner, who is also commemorated with a Montblanc 1858 Geosphere watch. Messner was not only one of the first men to summit Mount Everest without the need of supplemental oxygen in 1978, but he was also the first person to do so solo in 1980.

Nimsdai Purja, an exceptional mountaineer who was granted an MBE (Member of the Order of the British Empire) by Her Majesty the Queen of the United Kingdom for remarkable achievement in extreme high-altitude mountaineering, was immediately mentioned by Messner.

Nimsdai will attempt to summit Mount Everest without supplemental oxygen in May 2022, while wearing the Montblanc 1858 Geosphere Chronograph 0 Oxygen LE290 on his wrist to put the timepiece to the test. The watch will also have an unforgettable encounter with Nimsdai on Mount Everest, allowing each owner to look down at their wrist and realise that nothing is impossible.

Another First: A Montblanc 1858 Geosphere Chronograph

A chronograph function, which can be used to record the elapsed duration of various mountain actions, is another first for the Montblanc 1858 Geosphere series. Montblanc’s new MB 29.27 automatic chronograph movement features a central chronograph seconds hand, 30-minute chronograph on a sub dial at three o’clock, and chronograph hour at nine o’clock.

At two o’clock is the start/stop pusher, and at four o’clock is the reset button. With its rotating globes for both the Northern and Southern hemispheres, a 24-hour scale, a day/night indicator, and a date via a disc, the chronograph complements the Montblanc 1858 Geosphere’s unique world time function.

The timepiece is housed in a 44mm polished titanium case that is extremely light, allowing Nimsdai’s equipment to be as light as possible. On the watch’s case back, Mount Everest is commemorated. The route Messner followed in 1978 is seen in this photograph of the world’s tallest peak above sea level.

It is available in a limited edition of 290 pieces, a number that refers to the 29,031 feet that Nimsdai will have to climb to reach the top, giving the ultimate explorer’s watch many more hours of real-world testing. 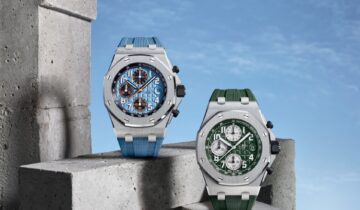 Breitling’s Navitimer For AOPA: 70 Years Of A Legendary Timepiece