Boundaries are being pushed, rules are being broken, and the game is being reinvented. Hyper technical workmanship and hyper expressive design are highlighted. Welcome to Roger Dubuis, a world where more is better and taking risks is required. The future of fine watchmaking has here with a ground-breaking Knights of the Round Table Monotourbillon timepiece launched at Watches And Wonders 2022, showcasing some of the most extravagant creations yet. It’s not about telling the time, it’s about craftsmanship – is what they emphasize. 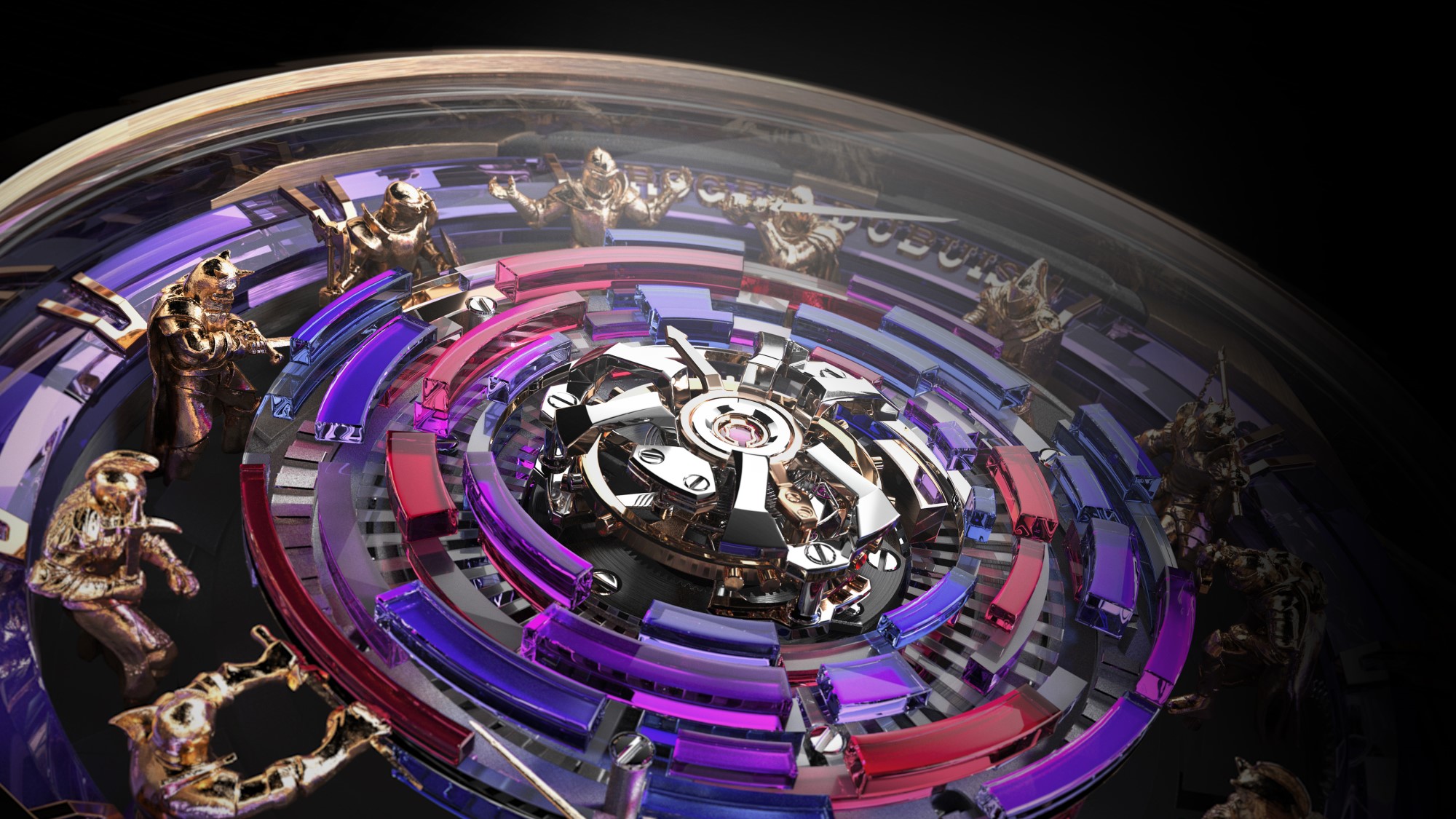 Roger Dubuis continues to push its aesthetic and technological skill to new heights, always aiming for excellence and continuously challenging itself to go further, in order to mark the physical return of Watches & Wonders with magnificent masterpieces.

Anyone can’t tell the story of the Knights of the Round Table collection. Each edition reinterprets the legend through the prism of Hyper Horology, making it one of Roger Dubuis’ most famous, bold, and magnificent collections. Only the most insane brains would dare to mix aesthetic expertise, horological craftsmanship, and modern design in this way. For the first time, the brave knights of King Arthur’s legend are equipped with a secret device: Roger Dubuis’ pride and joy, the Monotourbillon.

The change not only upends the laws of the game, but it also reshapes the future of Hyper Horology, as it ensures the 8th edition is worthy of reflecting the lucky number of the late, great Mr. Roger Dubuis himself.

In the world of King Arthur’s mythology, the equalising round table is crucial. Though this necessary setup is unavoidable, the amazing watchmakers were not scared to take on the challenge of constructing a design that was formed from this concentric requirement. The Monotourbillon emerges from the centre of the clock in a spectacular demonstration of advanced mechanics, displaying great technical prowess.

The hour marked warriors cast in Pink Gold 750/1000 and fashioned uniquely through micro-sculpture face a difficult job in defending horological mastery from the menace of gravity. Each knight is barely 6mm tall, built with his own personality and outfitted with armour, small enough to fit in a clock but mighty enough to express the commitment, passion, and audacity for which Roger Dubuis is recognised. Such a remarkable timepiece required equally remarkable hands that were totally integrated into the circular shape. That’s why two gold markers with perfectly centred revolving discs were chosen to denote the location of the minute and hour. 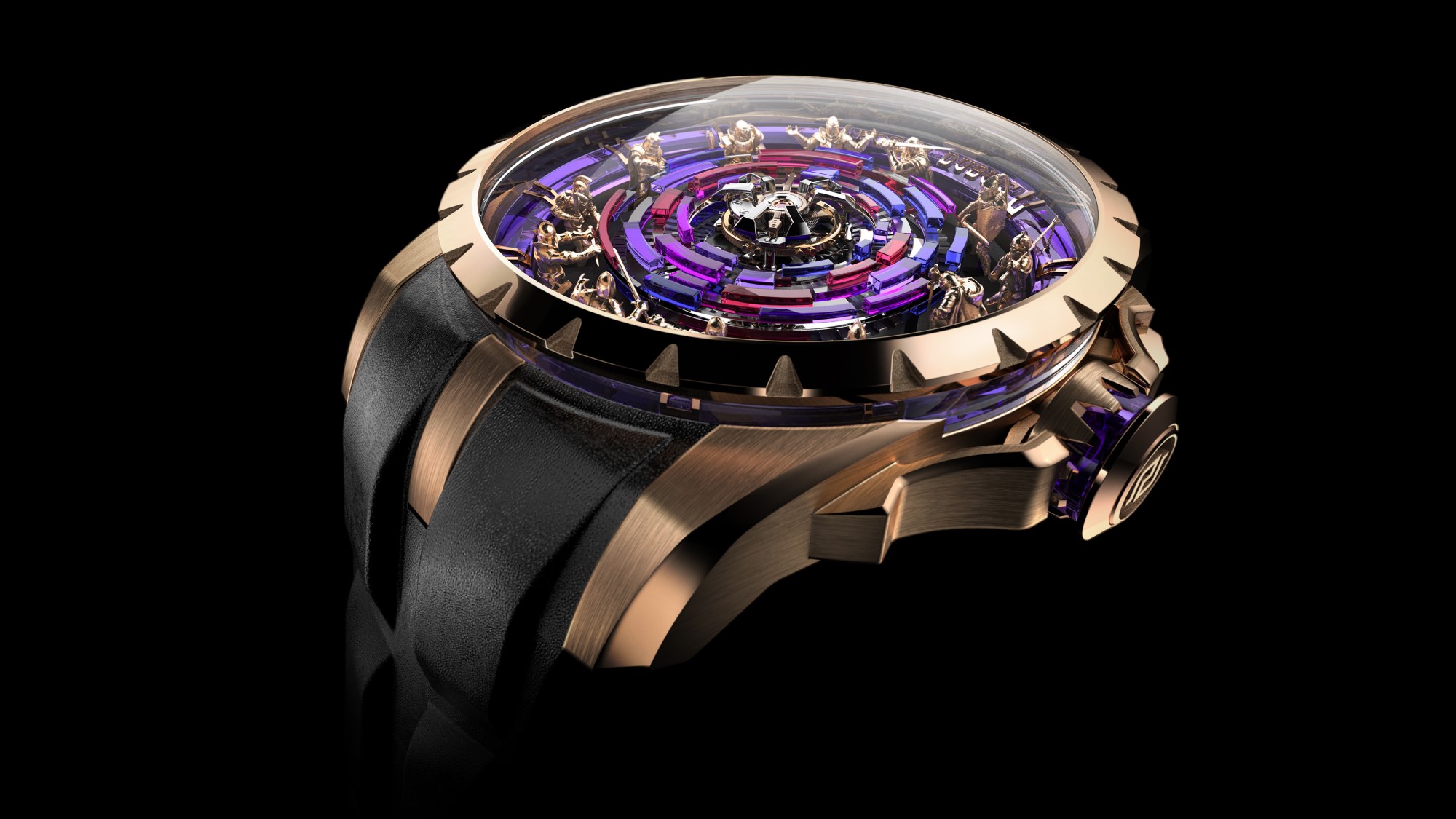 Furthermore, translucent purple Murano glass blocks appear to levitate around the Monotourbillon, while the double-surfaced flange is also carved from a single Murano glass block. Playing with no fewer than eight layers of décor surrounding the dial was required to achieve this effect; a great miracle given the display’s restricted surface area. The setting system is decentred to a position at 2 o’clock in keeping with the design and to respect the position of the knight at 3 o’clock. When you press this button, a little red flag appears to signify that the clock has switched from winding to setting mode.

Just as being invited to the round table was an extreme honour, such high standards of
excellence are rewarded with the Poinçon de Genève; one of the most exclusive stamps of
certification in watchmaking today.

Hyper Mechanics Made For Peak Performance

Performance is pushed to its maximum for the new RD 720SQ calibre with technical
developments designed to increase the power reserve to 72 hours. Meanwhile, the micro-rotor is optimised to minimise its vibrations, and crafted from Pink Gold 750/1000 and Tungsten finished with an engraving of the Roger Dubuis’ monogram to modernise its design. The Maison continuously seeks solutions for better performance and precision too, hence doubling the balance wheel inertia to improve stability and make it less sensitive to shocks.

Hyper-skilled, ultra-immersive, and ultra-exclusive. With a magnificent exhibition centred on its iconic collection, the Knights of the Round Table, Roger Dubuis returns its incredibly hyper world to Watches & Wonders 2022. 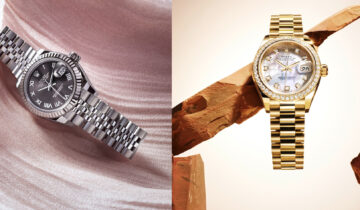 One For The Ladies: A Look At The Rolex Oyster Perpetual Lady-Datejust 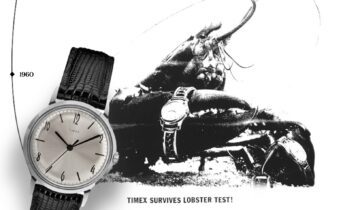 TIMEX: Timeless in a world full of change 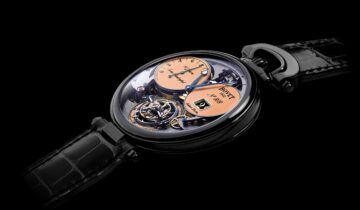