One of the most romantic complications out there, the mystical allure of moonphase complication never ceases to captivate the world of horology, but what is it about them that make them so enticing?

It’s no mystery that the effect of the moon is imperative to life on earth, and as technology, life, society, religion, calendars and everything in between progressed, our know-how of its movement became exigent to our existence. What was perhaps information that was privy exclusively to those working in astronomy transcended to an irreplaceable cog of our existence and this could be seen back in the 15th century when the moonphase complication started appearing on in public clocks.

Considered as one of the most mesmerising and still very functional examples is the Prague Astronomical Clock or Prague Orloj from 1410. Attached to the Old Town Hall and the only of its kind in working condition, the clock poetically displays the position of the sun, moon and various celestial details.

By the 16th century, the moonphases started appearing in standalone clocks, such as the complex grandfather clocks from Germany and England and soon after, it was adapted on a smaller scale to be incorporated into pocket watches. Finally in the 20th century, moonphases were seen on wristwatches and the first one was created by Patek Philippe in 1925.

This was just the beginning of a love affair that has remained eternal ever since, while it may be counted as a complication that has least practical value today, it is still the most sought after. Romanticised in various forms, shapes, styles and sizes, there is a whole world of possibilities when it comes to moonphase creations.

By definition, the moonphase indicator displays the current state of the moon based on the lunar cycle. Some take to this literally whilst others express poetically, and that’s the beauty, it’s open for interpretation and it stays true to its form. Over the decades there have been numerous timepieces that have incorporated this celestial insight and continue to do so, here are the ones that currently have us under an astral spell. 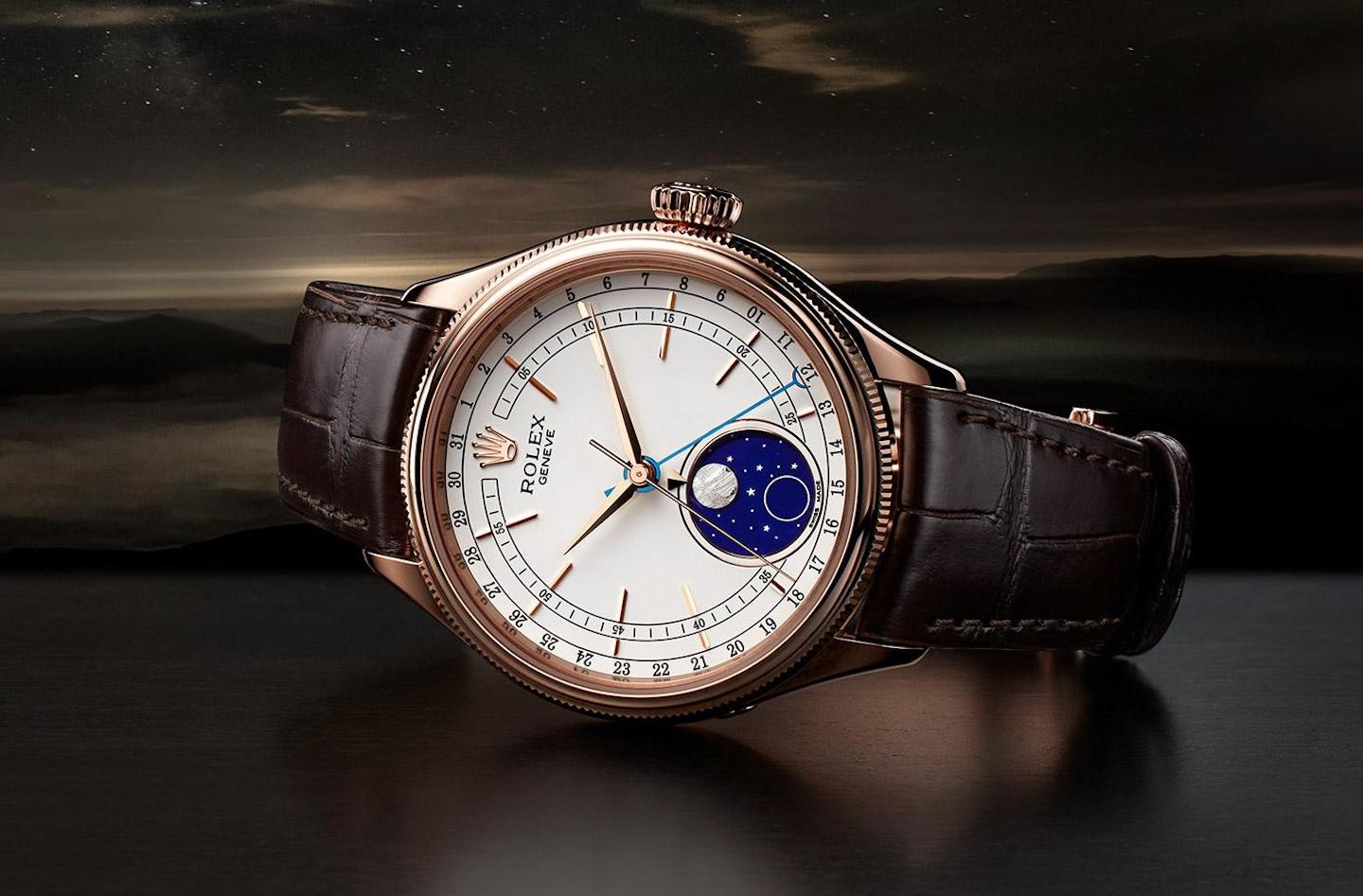 For most, Rolex is a bracelet-first brand, known for their iconic creations like the Daytona, Submariner, Explorer amongst others but upon closer inspection you’ll discover a gem within its vast scape—the Cellini. While Patek Philippe was the first ever brand to create a watch that had a moonphase, it was in fact Rolex who made a wrist watch that featured a moonphase only complication in the early 1950s. Over the years the brand has explored its beauty in numerous renditions and the latest one can be found in 2022’s Cellini Moonphase. Encased in 18 carat everose gold, the 39mm watch features a striking white dial with a moonphase indicator at 6 o’clock, where the moon is crafted in an actual piece of meteorite, cut as thin as a whisker. Appliqued on a deep blue pool of enamel representing the inky night sky, the wearer can witness the moon’s current phase, even in the middle of the day. 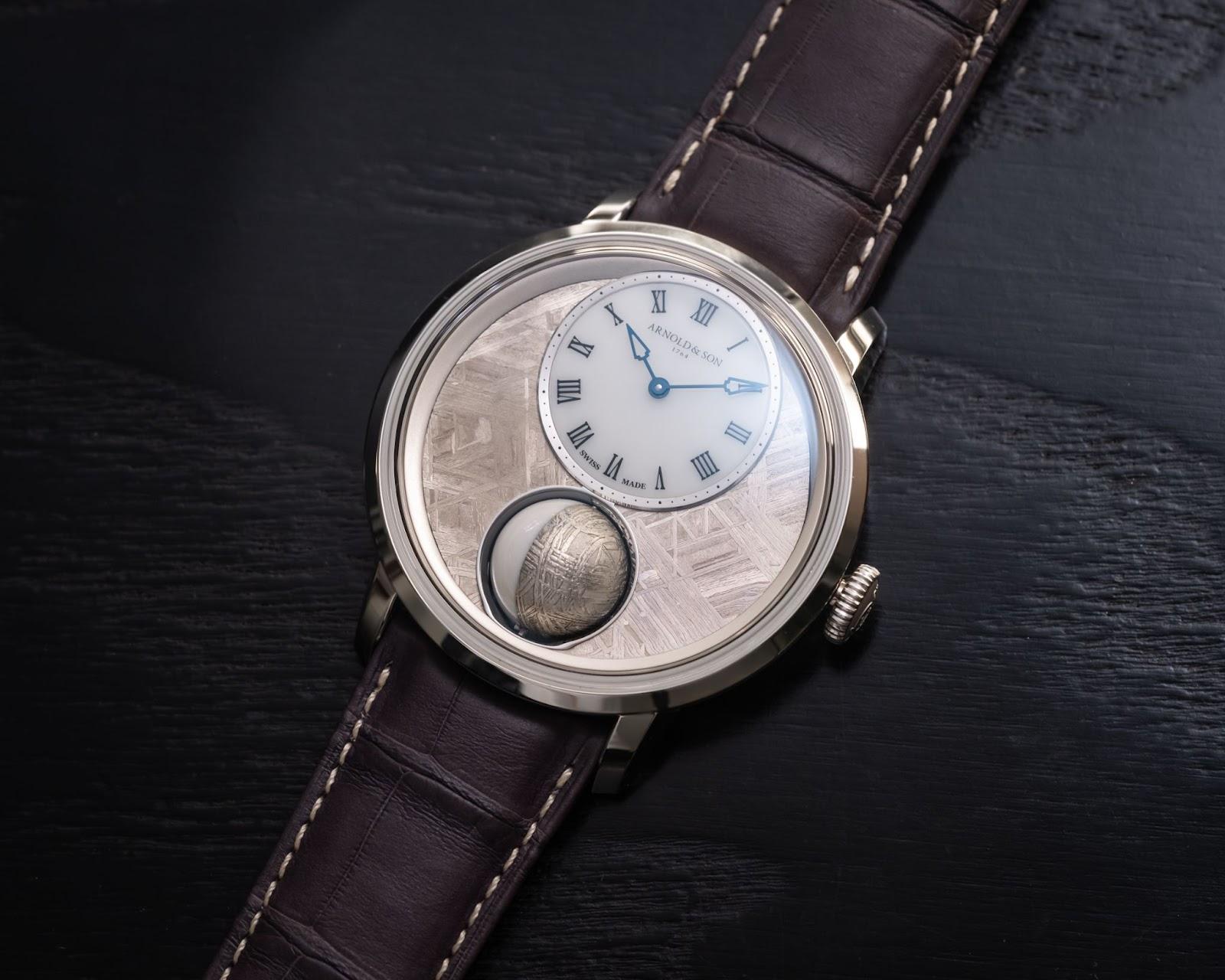 Believed that this is one of the largest ‘spherical moon’ ever incorporated in a wrist watch, the Arnold & Son Luna Manga series has had people in a tizzy ever since its inception. The platinum edition is not only an exceptional feat of haute horlogerie but also a GPHG nominee under the calendar and astronomy category. The mesmerising timepiece comes with a sand-coloured PVD-treated meteorite dial surrounded by a platinum case. To complete this limited edition’s cosmic references, the part of the moon in shadow is also made from meteorite. And as a final touch, a distinctive glow at night comes alive thanks to the Super-LumiNova coating on its moon hemisphere and opal subdial. The off-centred position of this display frees up the dial, allowing the three-dimensional moon carved from the same meteorite and Cacholong opal to take centre stage at 6 o’clock. 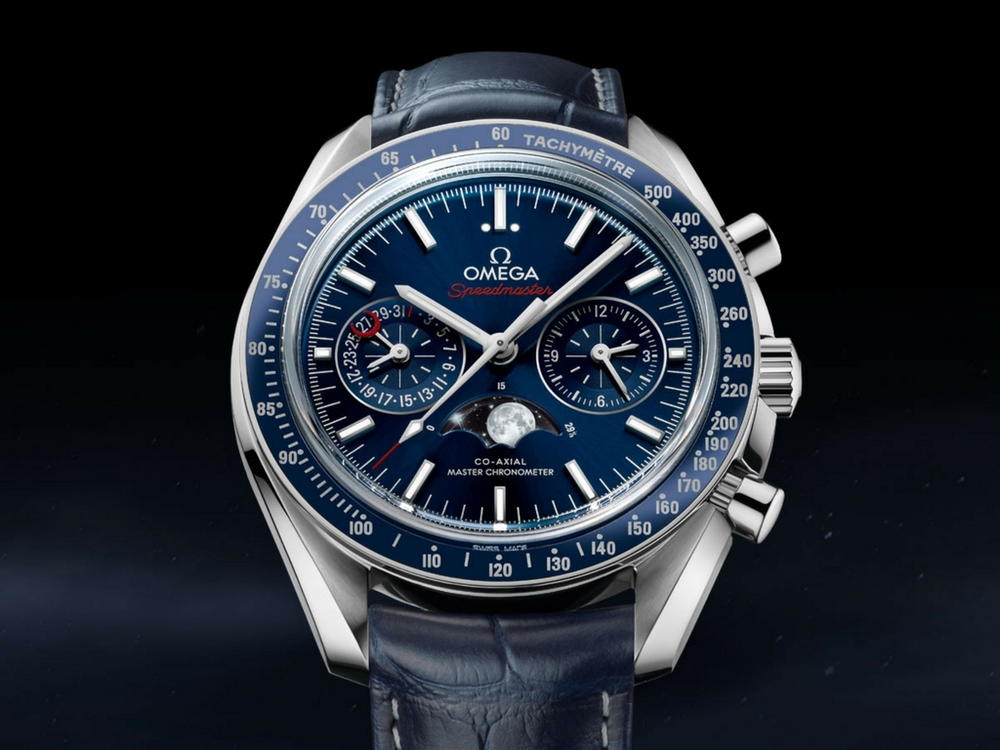 What better than a watch that has actually been to the moon? Modelled after the iconic speedmasters that were a part of all six lunar missions, the Speedmaster ‘moonwatch’ has a legendary following for all the right reasons. This classic moonphase edition features a sprawling 44.25mm blue satin brushed dial with sub dials for date and small seconds with a moonphase indicator at 6 o’clock. The moon is mastered after a detailed image taken by NASA showcasing it in all its glory and comes with a no-adjustment needed promise for a decade. 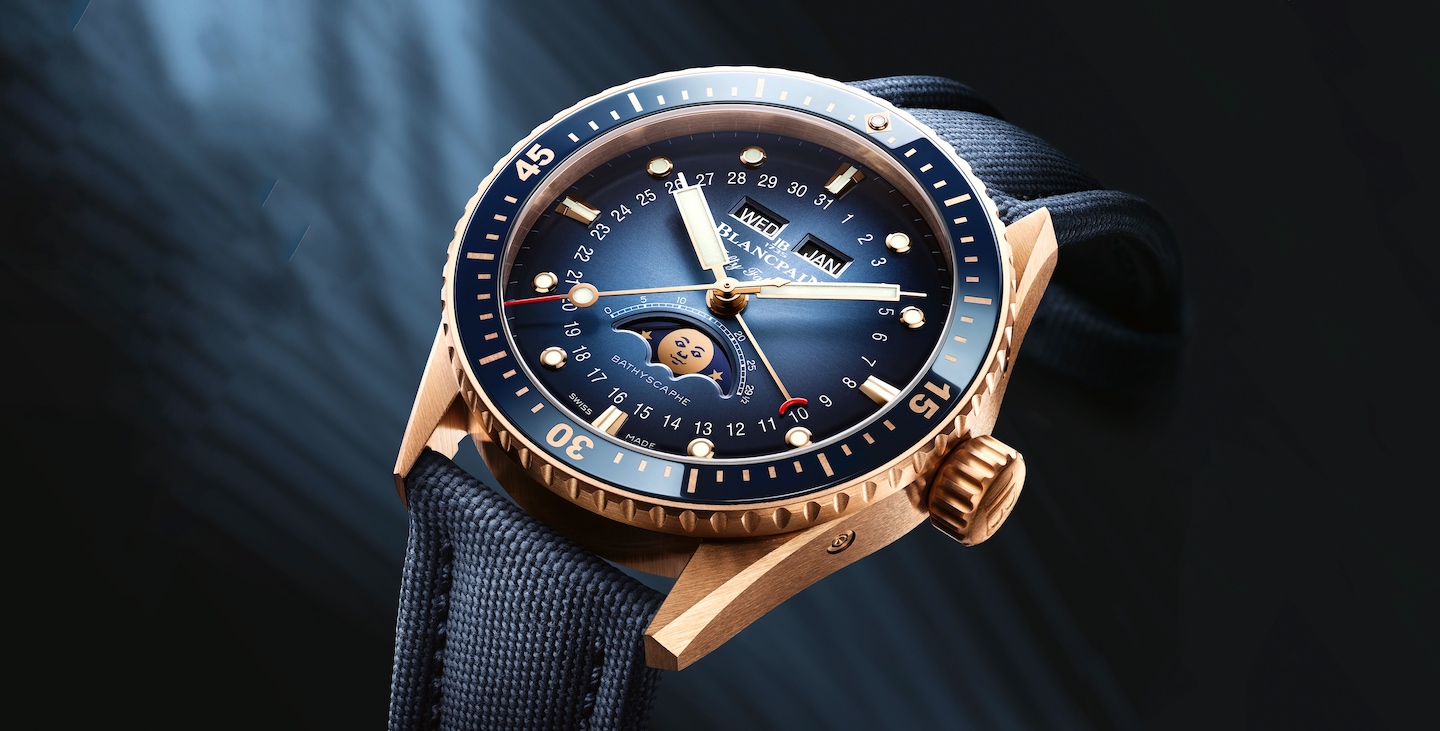 Retro modern with cues from the past, the Blancpain Bathyscaphe Quantième Complet Phases de Lune commemorates the poetic beauty of moonphase by coupling it with its day date complication. The subtle red gold against the blue 43mm blue sunburst dial allows legibility to be at its best. Matching the red gold, the moon is fashioned in the same finish along with a nod to the ceragold used on the ceramic bezel, uniting the three with harmonious ease. 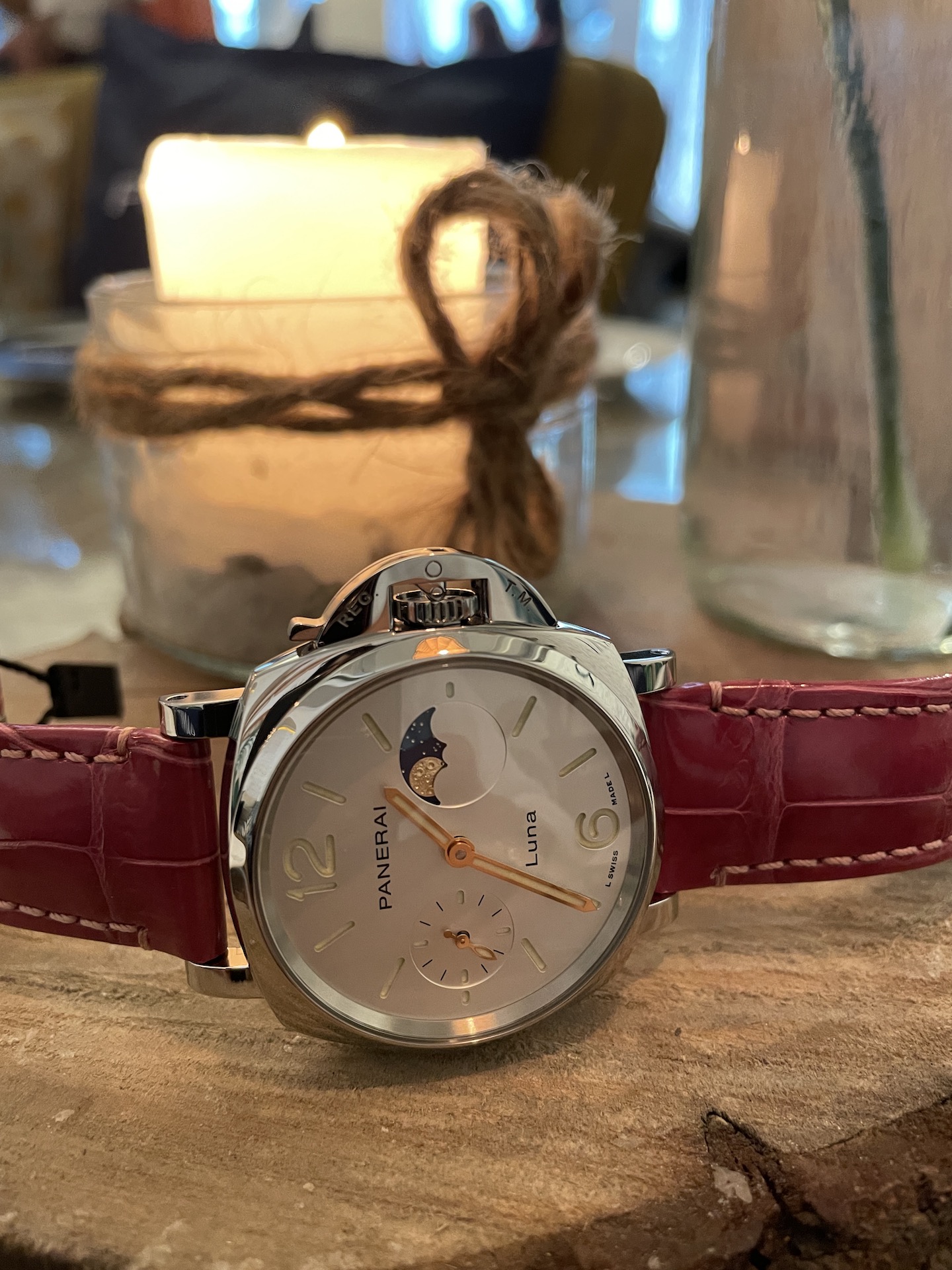 One of the most recent additions to the world of moonphases is Panerai’s new Luminor Due Luna’s. Featuring mother-of-pearl and sun- brushed dials, both in cases made from Panerai GoldtechTM and steel, these new watches are available in four different iterations. All in a 38mm with the moonphase situated at 3 o’clock, exhibiting a rotating disc with a 24 carats moon against a starry midnight blue sky, the new Luminor Due Luna’s will appeal to a broad spectrum of wearers

But these are just the tip of the iceberg, the list of moonphases is endless and ever growing so, while the phases of the moon change everyday, make sure you pick a piece that embodies your love for the compilation best. 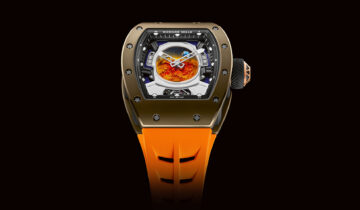 Iconic Music Artists Wearing Their Heart On Their Wrist 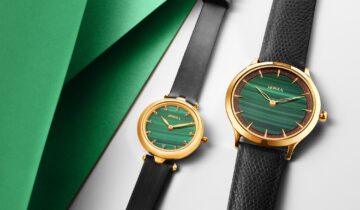