The  filigreed tourbillon with 84 parts, that weighs only a quarter of a gram

Leave the engineering to the Germans, not only with automobiles but even when it comes to fine watchmaking. Because the ‘fine engines’ made by A. Lange & Söhne, are second to none, in comparison to Swiss, who currently reign in luxury watchmaking.

In 2008, more than 200 years after the invention of the tourbillon, A. Lange & Söhne showed how an oscillating balance inside the rotating cage can be stopped to set a tourbillon timepiece to the precise second. By pulling the crown, a complex lever mechanism is triggered that pivots a movable V-shaped spring onto the balance wheel rim. The balance stops instantaneously, even if one of the spring arms is in contact with one of the three cage posts. The special geometry of the spring assures that the pressure imposed on the balance is always correctly dosed, regardless of the position of the cage. An advantage of this design is that it preserves the potential energy of the balance spring so that the balance can restart instantly as soon as the arresting spring is retracted when the crown is pushed home. 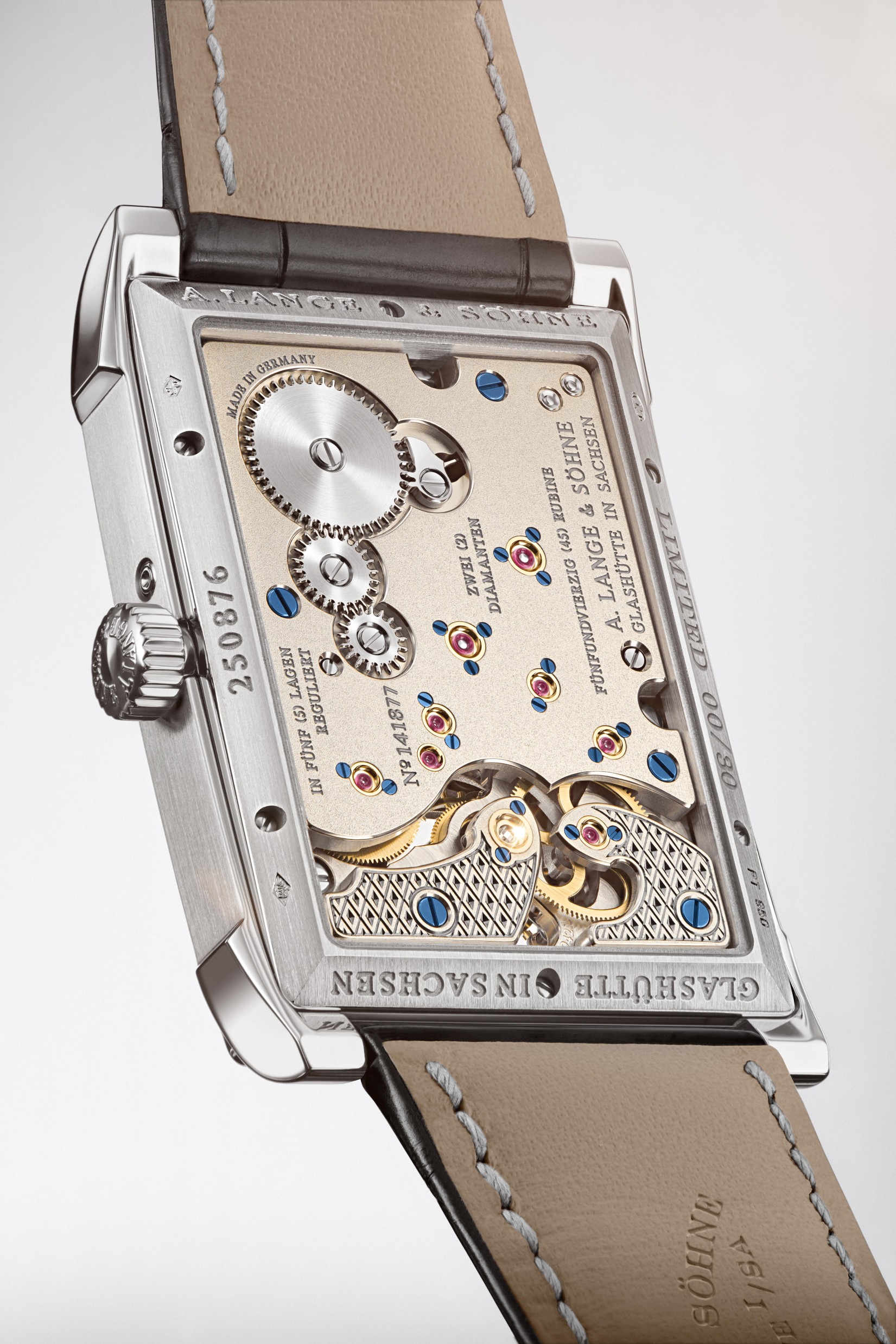 Measuring 22.3 by 32.6 millimeters, the form movement of the Cabaret Tourbillon Handwerkskunst (Handwerkskunst – translated as craftsmanship), is tailored to the rectangular shape of the case. In comparison with the 2008 version, it has a new indexless oscillation system with a Lange balance spring. The lozenge motif of the dial is echoed by the black-rhodiumed engravings on the tourbillon and intermediate wheel cocks, creating a visual bridge between the dial and the movement side. Simultaneously, the interplay of colours from silver and grey hues initiated on the dial is enriched by a further nuance. The train-wheel bridge in untreated German silver has a subtle granular surface inspired by the movements of historic pocket watches. It accounts for six of the total of nine screwed gold chatons. Two further ones are located on the tourbillon and intermediate wheel cocks, and one is integrated in the tourbillon bridge on the dial side. The winding train, decorated with circular graining, is visibly integrated in the plate. The engraved inscriptions on the plate are black-rhodiumed as well. A limitation engraving on the case back indicates the rarity of the horological masterpiece.

That’s A. Lange doing A. Lange. Apart from the exquisite, highly technical, and superlatively finished movement, which makes most watch geeks swoon, this 30-piece limited edition of the Cabaret Tourbillon Handwerkskunst, places special emphasis on artistic aura. The seventh model of the Handwerkskunst series launched ten years ago is characterised by the artistic and artisanal qualities of the elaborate finissage of the dial and the movement, with the lozenge chosen as the signature design element. 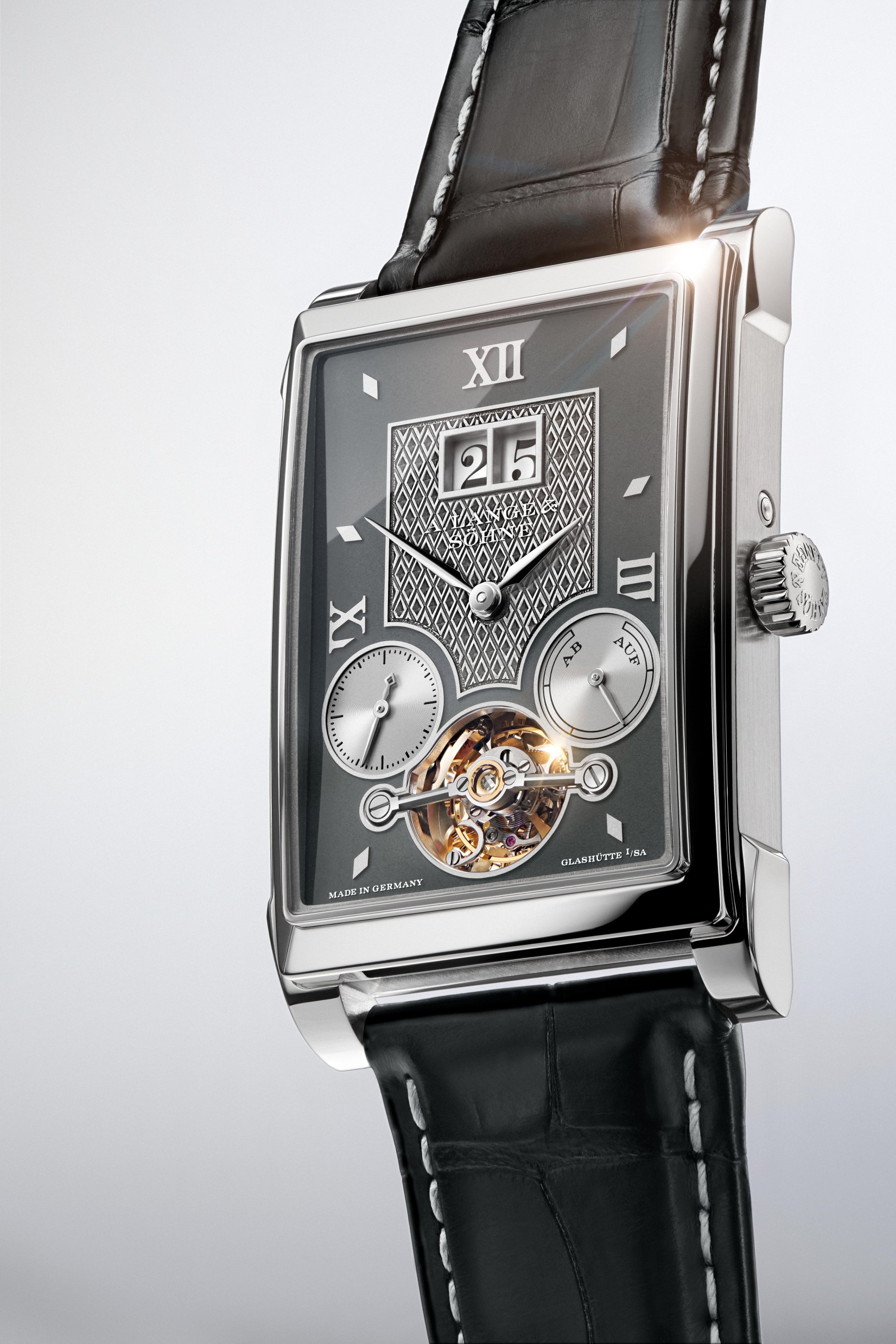 The three-part dial of the Cabaret Tourbillon Handwerkskunst is made of solid white gold and is crafted in the manufactory. The inner area with the typical Lange outsize date is manually engraved with a lozenge pattern. This regular motif sets a challenge to the engraver as every small deviation is instantly visible. It is inspired by the six lozenge-shaped hour markers in gold that face the centre. Together with the Roman numerals III, IX and XII, they stand in the outer zone of the dial with a delicate surface that serves as a stage. A thin line decorated with tremblage visually separates the dial parts from one another. This engraving technique also graces the frame of the hand eye and of the date aperture. 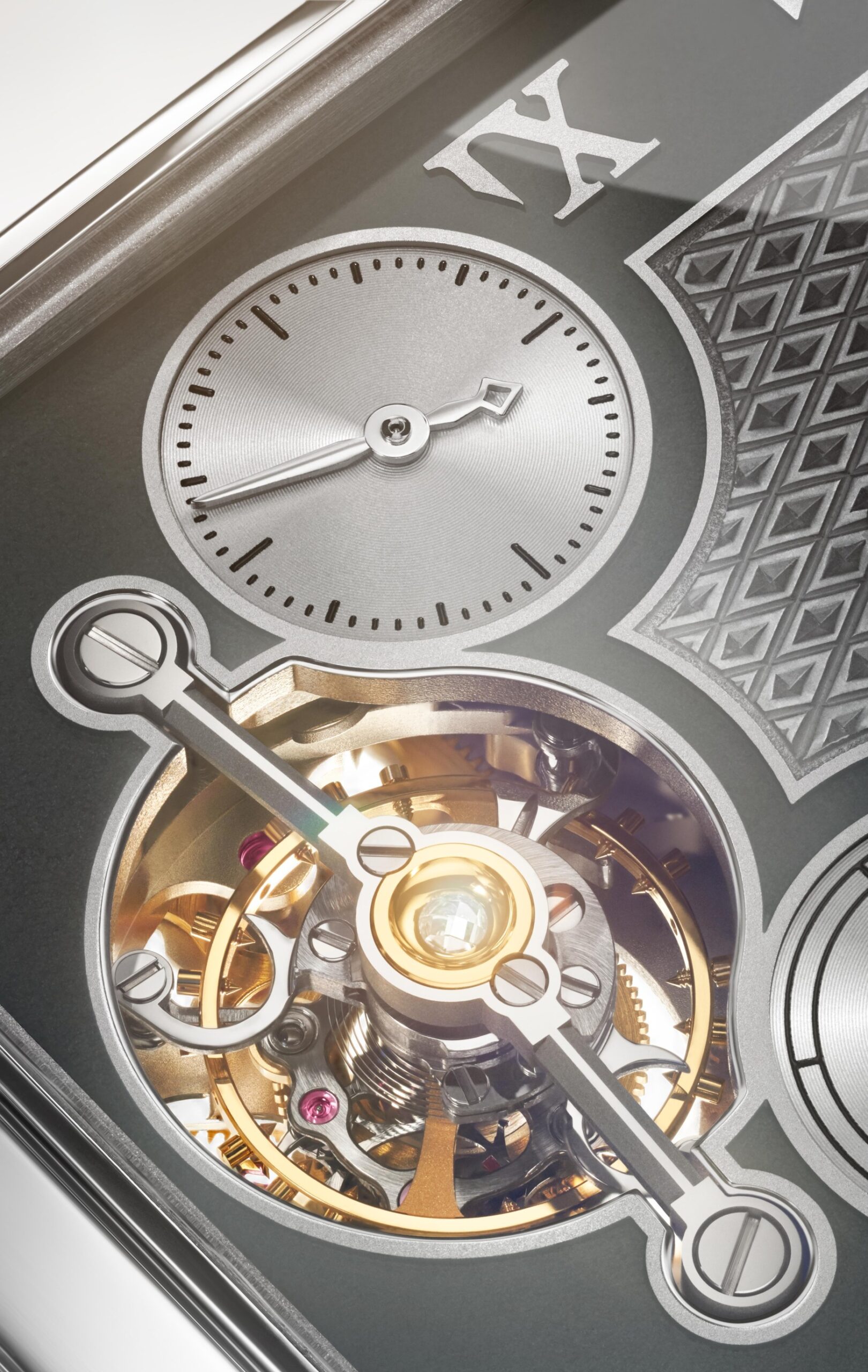 The dial is coated with a semi-transparent enamel layer that adds extra depth to the engraving and showcases various metallic shades of grey. The result is an outstanding dial with a three-dimensional effect. The separately integrated subsidiary dials for the small seconds and the power-reserve indicator, which at A. Lange & Söhne is traditionally executed with the UP/DOWN display, consist of rhodium-coloured gold; the hands are made of rhodiumed gold. An aperture in the dial reveals the one-minute tourbillon which is suspended between two diamond endstones. On its top side, the matt-finished tourbillon bridge has a black polishing that is applied using a technique that ranks among the most difficult types of finissage. 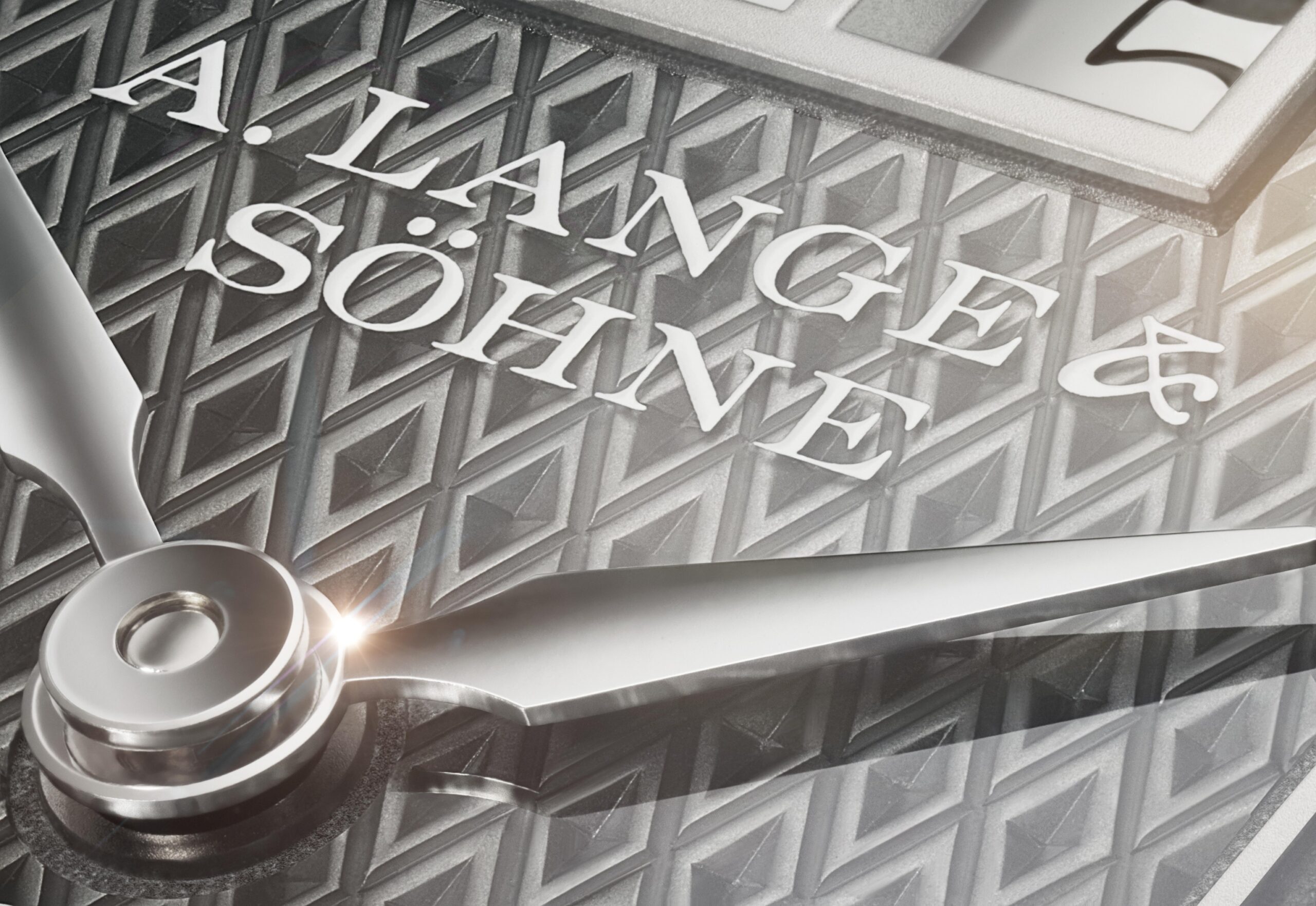 A rectangular case in platinum measuring 29.5 by 39.2 millimetres forms the precious frame for the new exclusive version of the first tourbillon with a stop-seconds mechanism. It is graced with a deployant buckle in platinum and a black leather strap with grey contrast stitching.

The manually wound calibre L042.1 of the Cabaret Tourbillon Handwerkskunst has a twin mainspring barrel that delivers a power reserve of 120 hours. It is a masterpiece of technology and craftsmanship. It is composed of 370 parts, of which no fewer than 84 are integrated in the filigreed tourbillon that weighs only a quarter of a gram. The movement owes its historic significance to a tiny component that transformed it into a milestone of precision watchmaking. 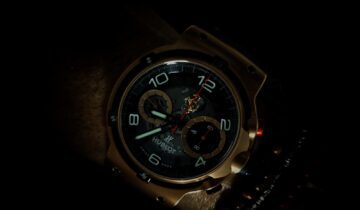 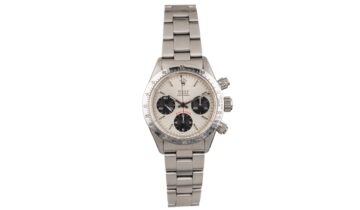 Rolex Daytona Turns 60: What Led To Its Success? 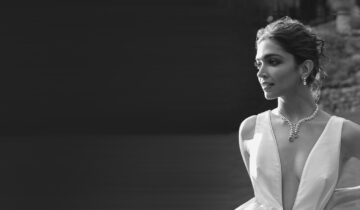