Fancy wearing a watch in titanium, paired beautifully with your formal attire? The first-ever Baltic Titanium collection for Dubai-based retailer Perpétuel is here to fulfill this dream. Perpétuel, debuted last year with its first limited edition, a pair of Baltic watches.

To celebrate UAE’s 50th Anniversary, Perpétuel has collaborated with Baltic for this Titanium Collection, a limited-edition set of watches from the French company.

The three-piece limited edition is Baltic’s first use of titanium for its cases, which have previously always been steel. The producer of inexpensive, antique watches has adapted the edition for Perpétuel’s native region, using Eastern-Arabic numerals on the dials on all three watches (as well as the bezel with the GMT). While we all know, Baltic watches have a vintage appeal, this new collaboration adds glamour to this timepiece.

All About The Watches

While the sector-like dial has an antique feel to it, the two-tone style is unique and eye-catching. The Eastern-Arabic numbers’ beautiful script blends perfectly with the design and colors.

The GMT bezel’s Eastern-Arabic numbers don’t function may be difficult to understand. The hour markers’ basic forms clash with the exquisite Arabic lettering. The timepieces are all the same size, which goes well with the retro aesthetic. At 38 mm in diameter, the Chronograph and HMS are similar, while the GMT is slightly larger at 39 mm. All three are 12 mm tall.

The HMS and Chronograph have a lot in common, and it’s not just the casing. Both feature identical dial aesthetics, which are clearly inspired by wristwatches from the 1930s: a gold chapter ring with Eastern-Arabic numerals on a black lacquered display.

The GMT is clearly distinct, with a 1950s look that was not likely influenced by early GMT watches of the era. Although the dial is lacquered black, the Eastern-Arabic numerals are mostly found on the bezel. It’s also the most expensive of the three, owing to internal movement.

Movements from the Far East power the HMS and Chronograph, while the Swiss-made Soprod C125 is drives the GMT.  The Perpétuel editions are priced higher than the regular Baltic models, but they are clearly different in style and have very limited runs. The Perpétuel still are good values, especially considering how affordable Baltic watches are, to begin with. The HMS is priced at $1590 (AED 5900), the Chronograph at $1860 (AED 6900) and the GMT is at $2100 (AED 7900).

Starting on December 2nd at 10 p.m. UAE time, these 71 timepieces and 29 three-piece box sets will be available. 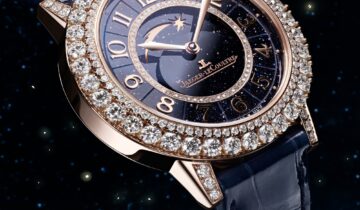 Watches & Wonders 2022: Jaeger-LeCoultre – Shooting for the Stars with the Rendez-Vous Dazzling Star 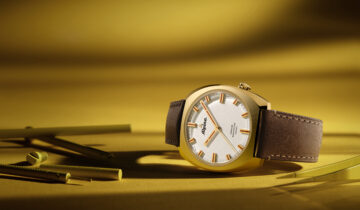 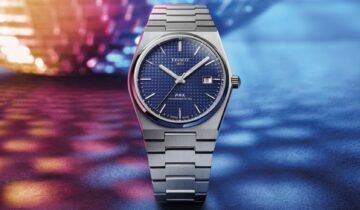