As we step into a new lunar year, Ulysse Nardin has introduced a new celestial odyssey. Reinvented watchmaking mechanics reproducing as faithfully as possible the sun’s visible trajectory and the lunar cycles, here is the Moonstruck. 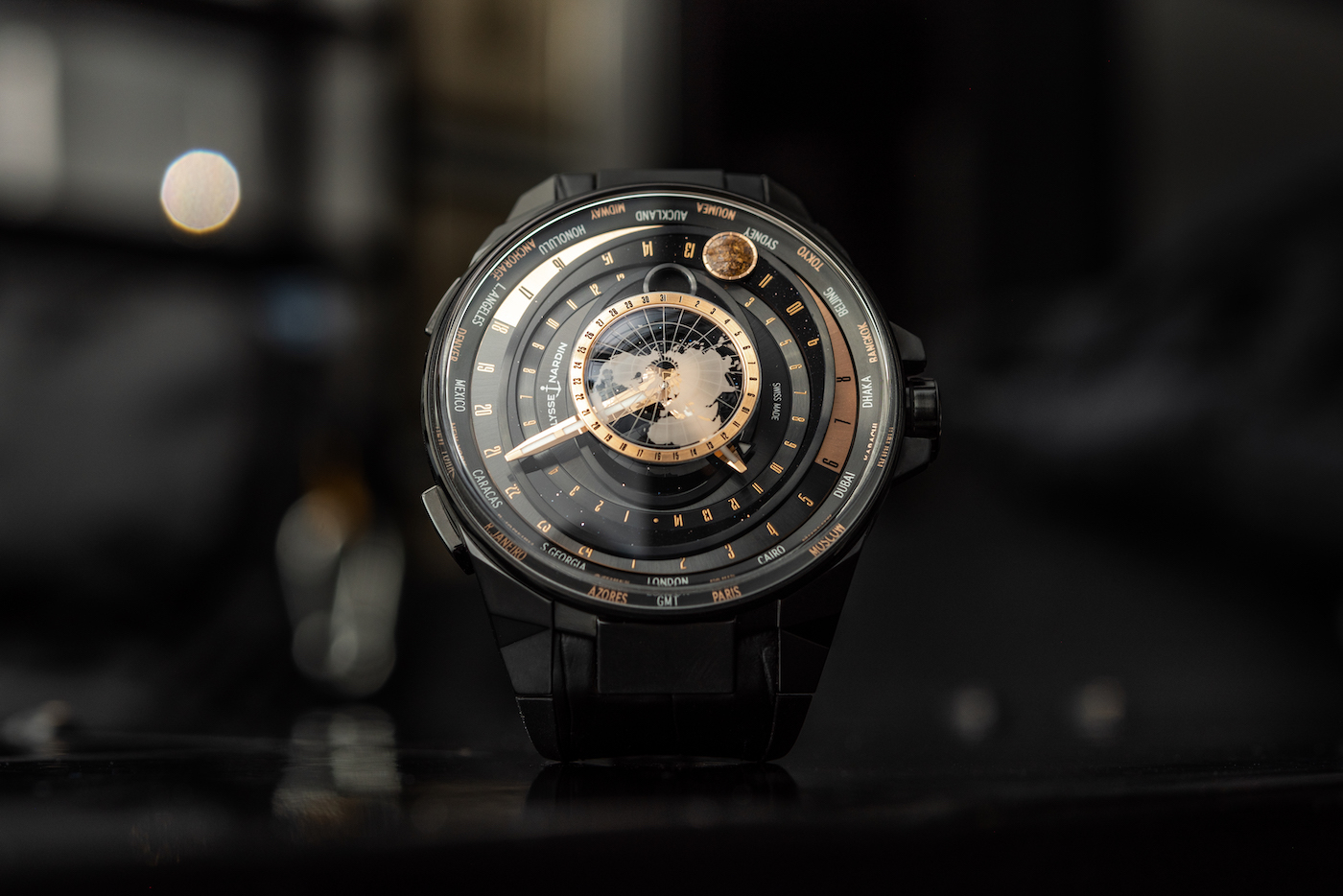 Today, this new Blast, descended from the trilogy of astronomical watches created nearly forty years ago by the master watchmaker Ludwig Oechslin, proposes to set in motion the primordial elements of the visible celestial mechanisms so that everyone can gain a poetic understanding of the universe that envelops us thanks to a contemporary and intuitive display.

Who is Ludwig Oechslin?

Besides being a renowned archaeologist, Ludwig Oechslin was also awarded a PhD in Philosophy, History of Research and Erudition (theoretical physics) and Astronomy, from the University of Bern, and in 1995 a habilitation in pre-industrial technical archaeology from the Swiss Federal Institute of Technology in Zürich (ETHZ). In parallel to this, he also undertook a watchmaking apprenticeship and became a repairer in 1984 and then a master watchmaker in 1993. From 1983 to 1990, he developed for Ulysse Nardin, first, the Astrolabium Galileo Galilei watch and then two other pieces to form a Trilogy that has remained in the annals of the profession as the benchmark in terms of astronomical complications. 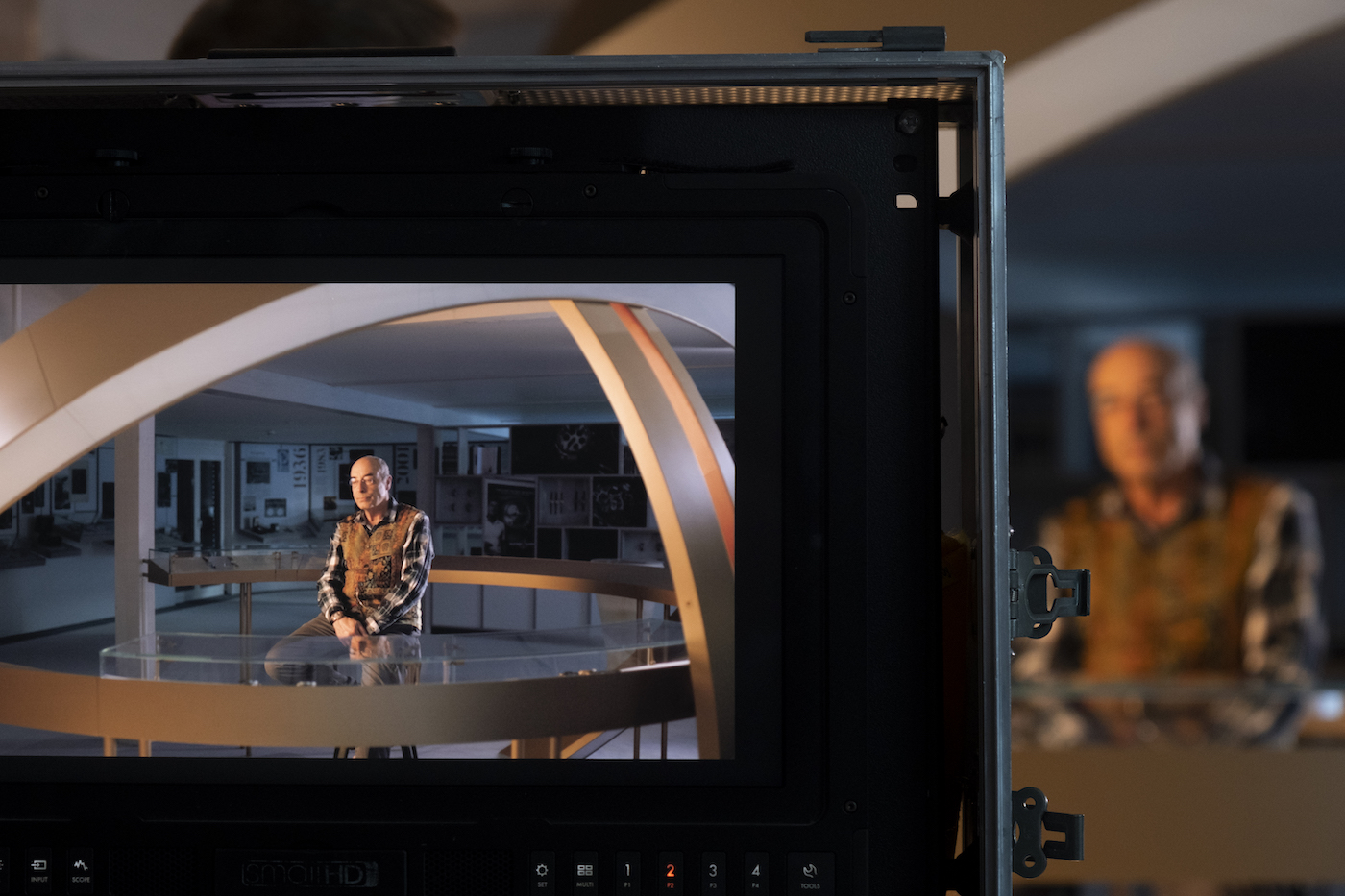 Passionate about mechanical efficiency, in 2001 he created the very first watch in Watchmaking History to incorporate silicium into its mechanism – The Freak.

“I am delighted that my watches and astronomical clocks enable people to think about their position in the universe and perhaps realize that we are not the center of the world.”

The Blast Moonstruck, like all watches incorporating elaborated astronomical information, seeks to be a miniaturized extrapolation of the formidable turret clocks constructed towards the end of the Middle Ages by towns of consequence. With an easily readable and understandable display, it is the successor of the astronomical instruments of the past. Thanks to its sophisticated mechanism, it assures the display of the time in a place chosen from among the 24 principal time zones that the world has been using since the Washington Convention of 1884. By means of pushers located on the left-hand side of the case, it is possible to put the main time display forward or back in leaps of one hour to adjust to another time zone. 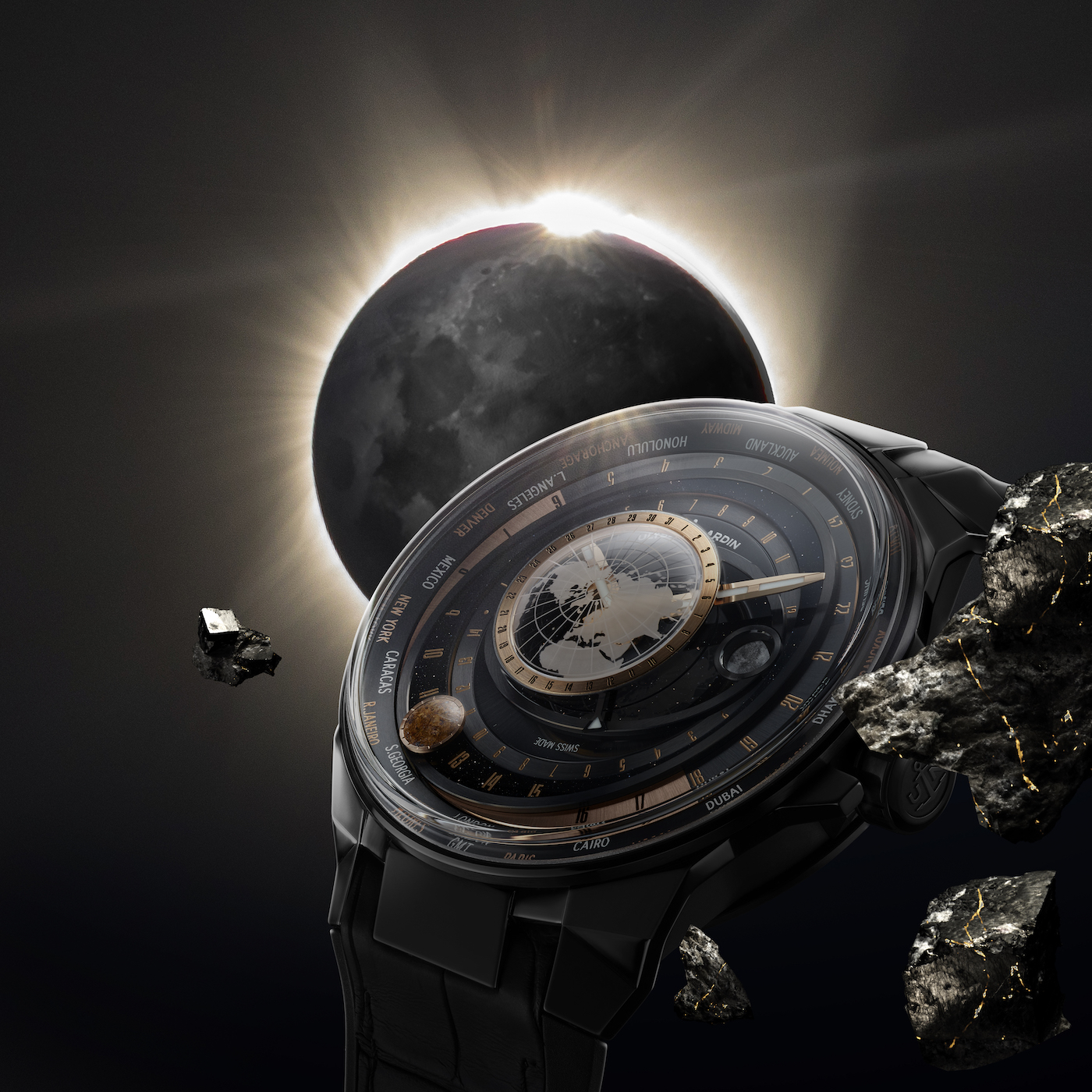 The Blast Moonstruck is also fitted with a moon phase complication of precision, which, combined with the complication that allows real-time following of the sun that gives it its brilliance, adds relief and life to the dial. This scientific representation of considerable oneiric potential will serve the cause of great leaders in search of the ultimate watch, but also that of sailors, with whom the Manufacture has kept up an almost intimate relationship since its establishment in 1846. They will know the full extent of the benefits this sober and discreet display can bring them. From day to day, they will be able to predict the dates of the spring tides at a glance by observing the sun and moon aligning on their respective ellipses.

Designed to follow in the footsteps of the fabulous trilogy devised by Ludwig Oechslin from 1985, this watch puts aside the Copernican representation of our solar system in favor of a geocentric approach that is easier to read and understand for us others, the inhabitants of Earth. 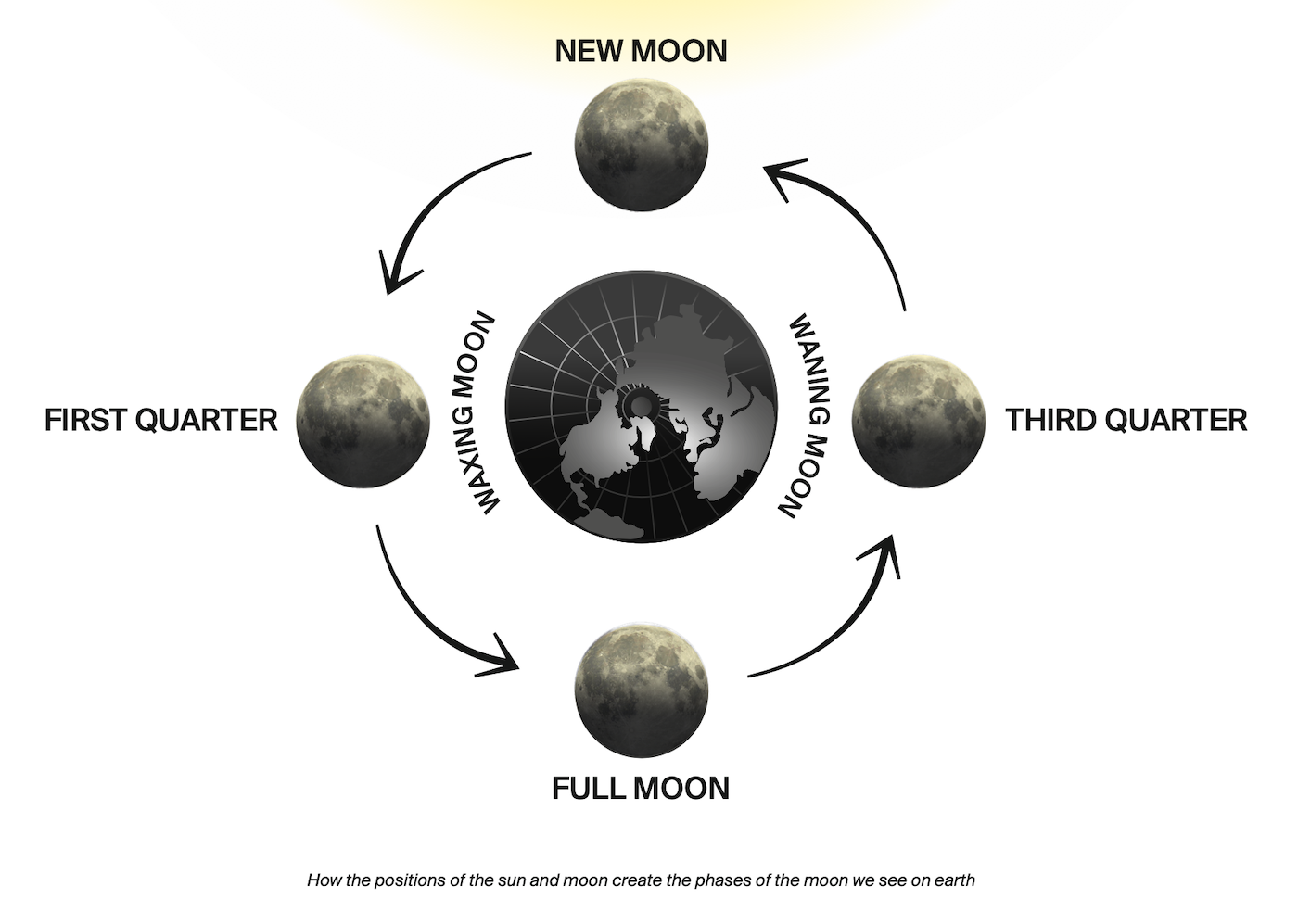 To accentuate this sensation of being at the heart of the universe based on observation of the watch, the designers, together with the master, Ludwig Oechslin, chose to place the part of the northern hemisphere seen from the North Pole at the center of the instrument’s sapphire crystal. To increase the impact of the 3D effect, the domed crystal, with the landmasses micro-engraved on the inside, is set in the protective sapphire crystal box encircled by an 18 ct rose gold ring engraved with the 31 days of the month, which has for a pointer a small triangle loaded with luminescent material. 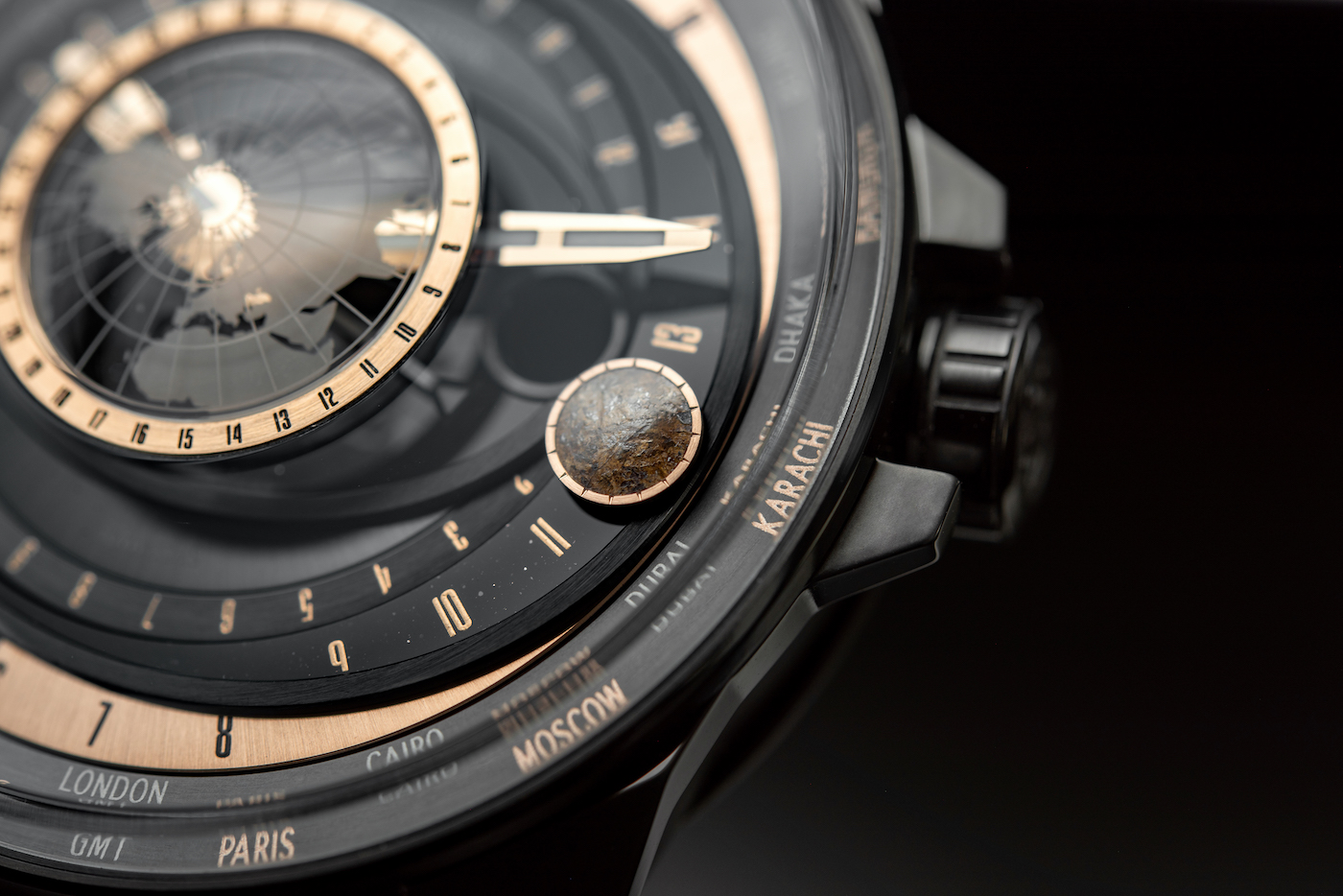 Underneath this three-dimensional structure glide hands of the precision and contemporary design that the Blast collection is known for. Their tapering form ensures instinctive reading, even in total darkness, thanks to the presence of a generous quantity of luminescent material down the middle. They indicate the local time, set to the time of the time zone in which the watch’s owner lives. But they can also be set at will to any one of 24 time zones for which the names of corresponding cities are reproduced on the fixed flange of the dial. This can be done, forwards or backwards, by means of a sophisticated mechanism very often used by Ulysse Nardin and activated by the two rectangular pushers located on the left side of the case. Simple and intuitive, this world time function, always useful for seasoned travellers, comes together with an advanced astronomical complication. 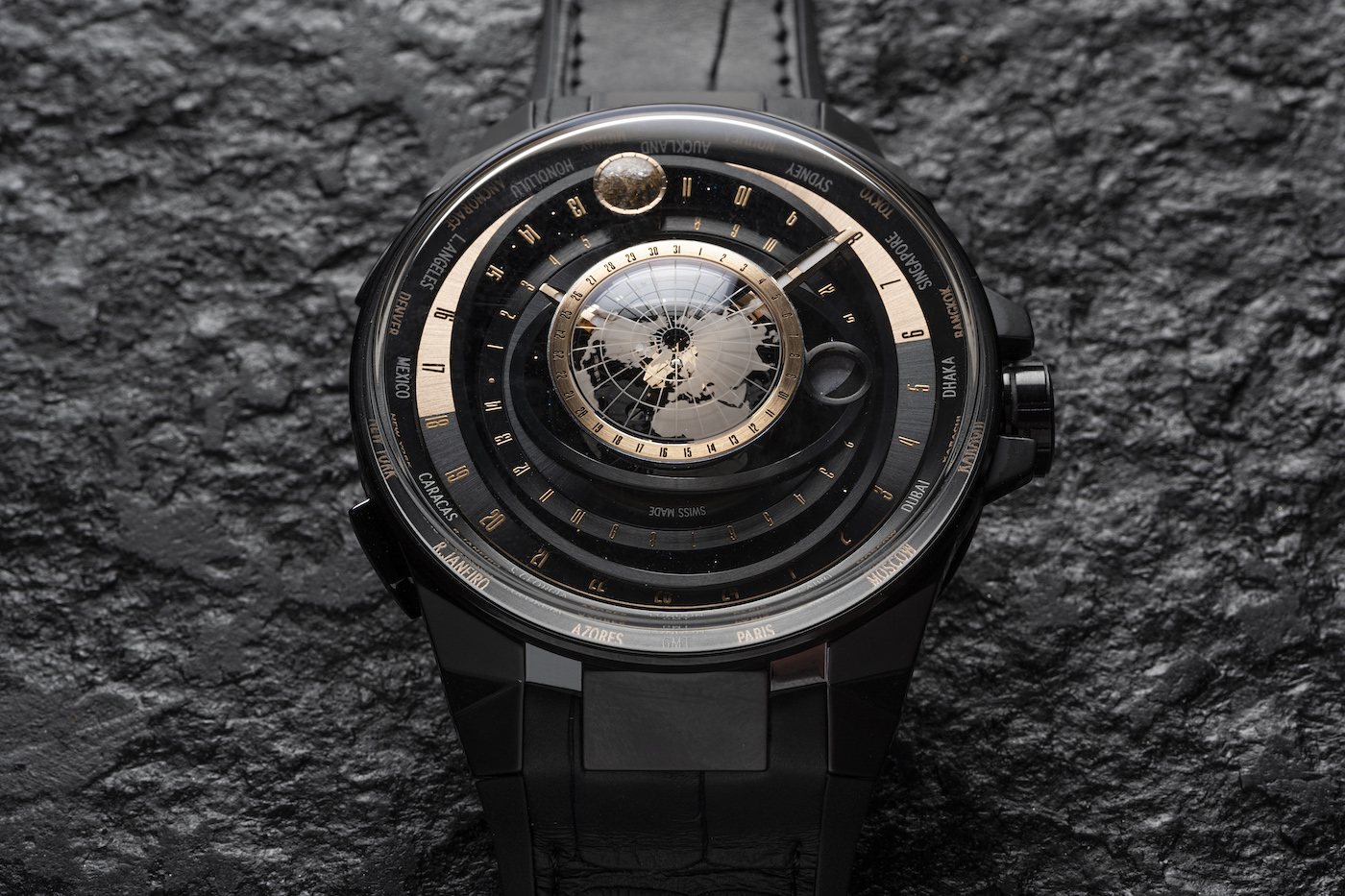 This 45 mm diameter astronomical watch in black ceramic and black DLC- treated titanium, worn on an alligator, velvet or rubber strap that is also black, surely meets the expectations of this ambitious project.

In addition to the time display observable against a background of the night-sky portrayed by a disk made of aventurine, times around the world can be read with the aid of the fixed flange bearing the names of cities and the rotating disk on which a sun in relief and the time indications appear at 12 o’clock. The watch also has a Dual Time mechanism. This allows changing of the main display in leaps of full hours with the aid of the two pushers located on the left side of the case middle to show the time in a given country on the dial while keeping the initial time alongside the reference city. This highly efficient watch also possesses an aperture that, showing the phases of the moon in a realistic manner, associates its course with a three-dimensional representation of the sun located at 12 o’clock on the time display for the reference time zone. 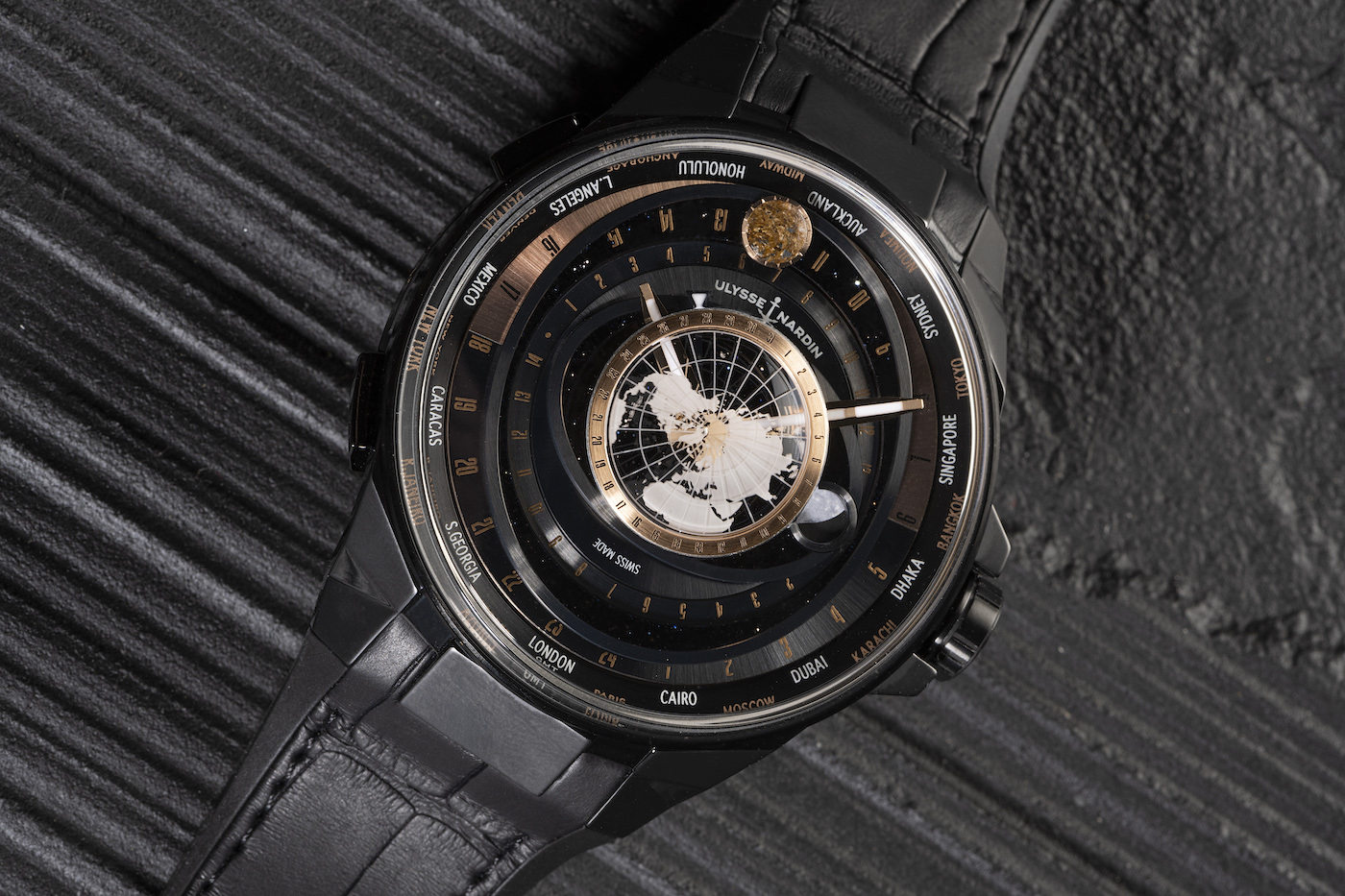 The team in charge of the creation of the Moonstruck chose to provide a representation of the moon phases in a round aperture located at the apogee of an ellipse portraying its orbit, which is depicted as being in the same ecliptic plane as Earth for practical reasons. This aperture, carried by a disk, is associated with an elaborate gear train. It causes the moon phase indicator to make one complete rotation per day to follow the course of the sun, the source of the moon’s brightness, and also causes it to make a full circle of the dial in 29 days, 12 hours, 41 minutes and 9.3 seconds, representing the duration of a lunar month, also known as a synodic rotation, which has an astronomical duration of 29 days, 12 hours, 44 minutes and 2.9 seconds. 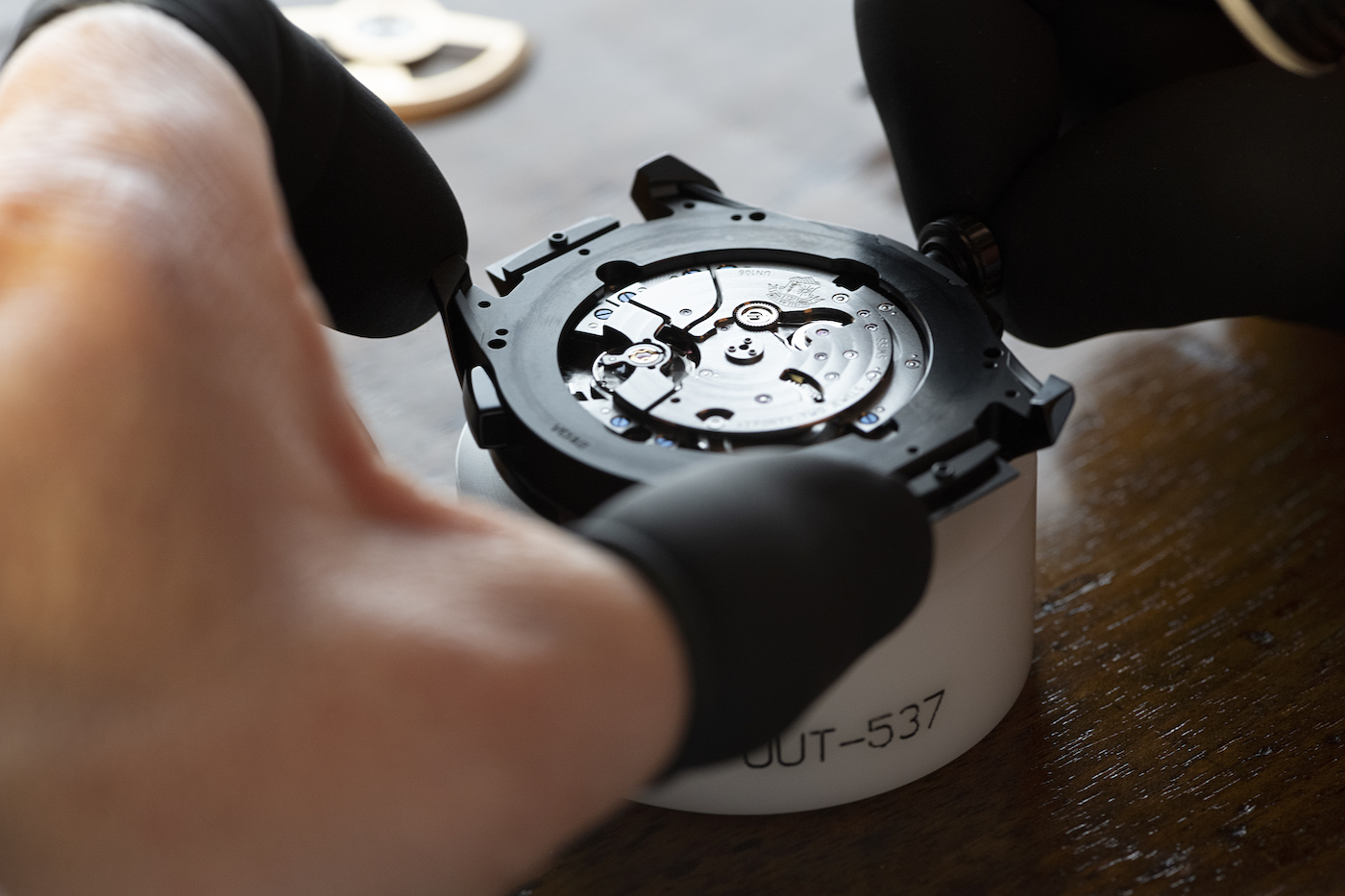 To conserve its accuracy, the aperture showing the representation of the moon retreats every 24 hours on its circle of revolution by an angle corresponding, in degrees, to 1/29.53 of a lunar month to occupy a new position in relation to the sun. At the same time, the representation contained in this small mobile aperture also evolves to appear a little brighter or dimmer in line with the lunar calendar. 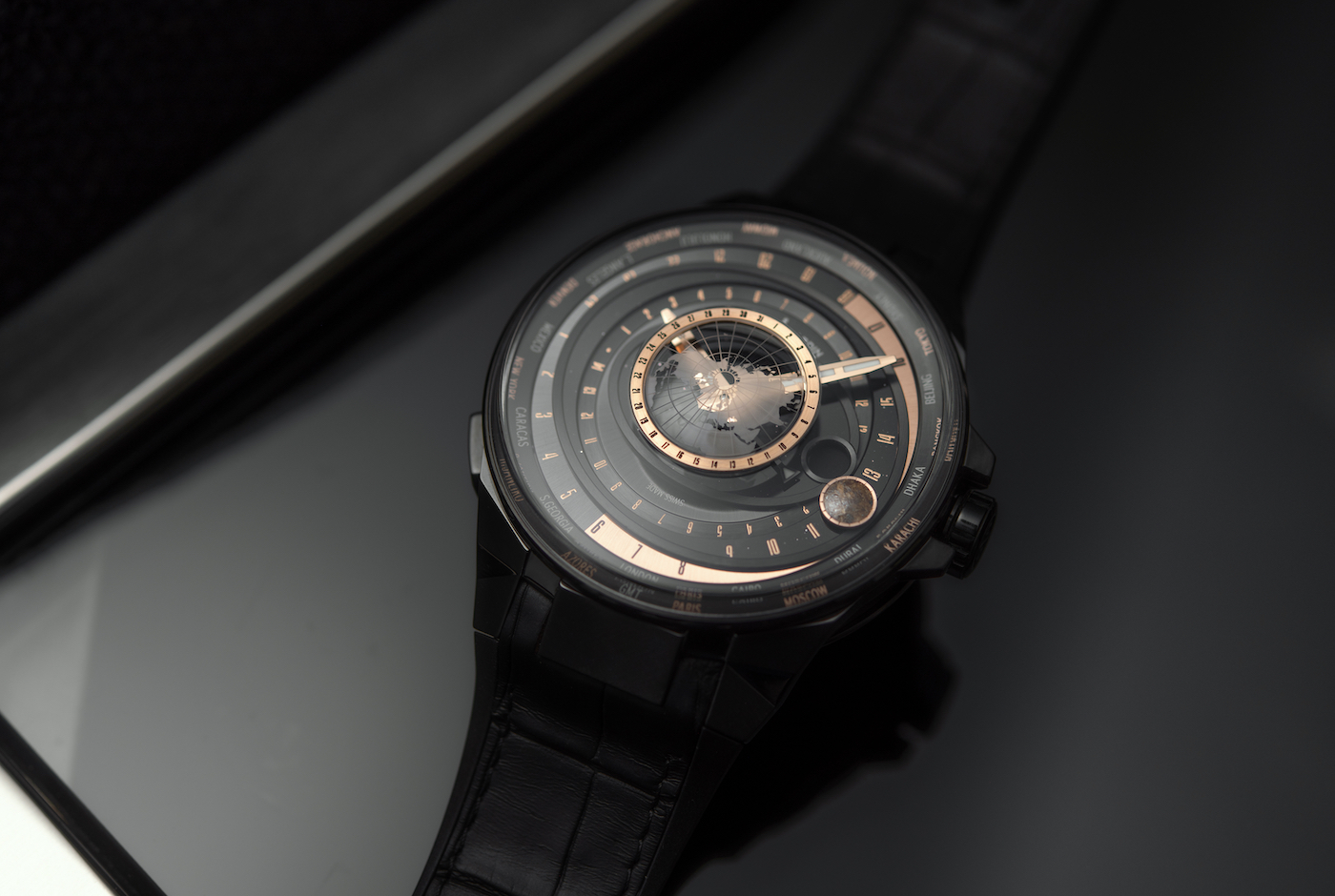 When a portion of the moon is visible in it, the aperture conserves an identical position in relation to the sun, here reproduced in relief and made of bronzite, for 24 hours. This rare and precious mineral of the pyroxenes family presents a golden surface punctuated with dark patches intended to reproduce those observable with a telescope on the mantle of the star around which, in reality, the earth gravitates. The moon phase display, described as being “of precision” because it will produce a divergence of one day only after 40 years of working, is associated with markings of the ages of the moon on the ellipsis intended to represent the revolution of our natural satellite around the earth. 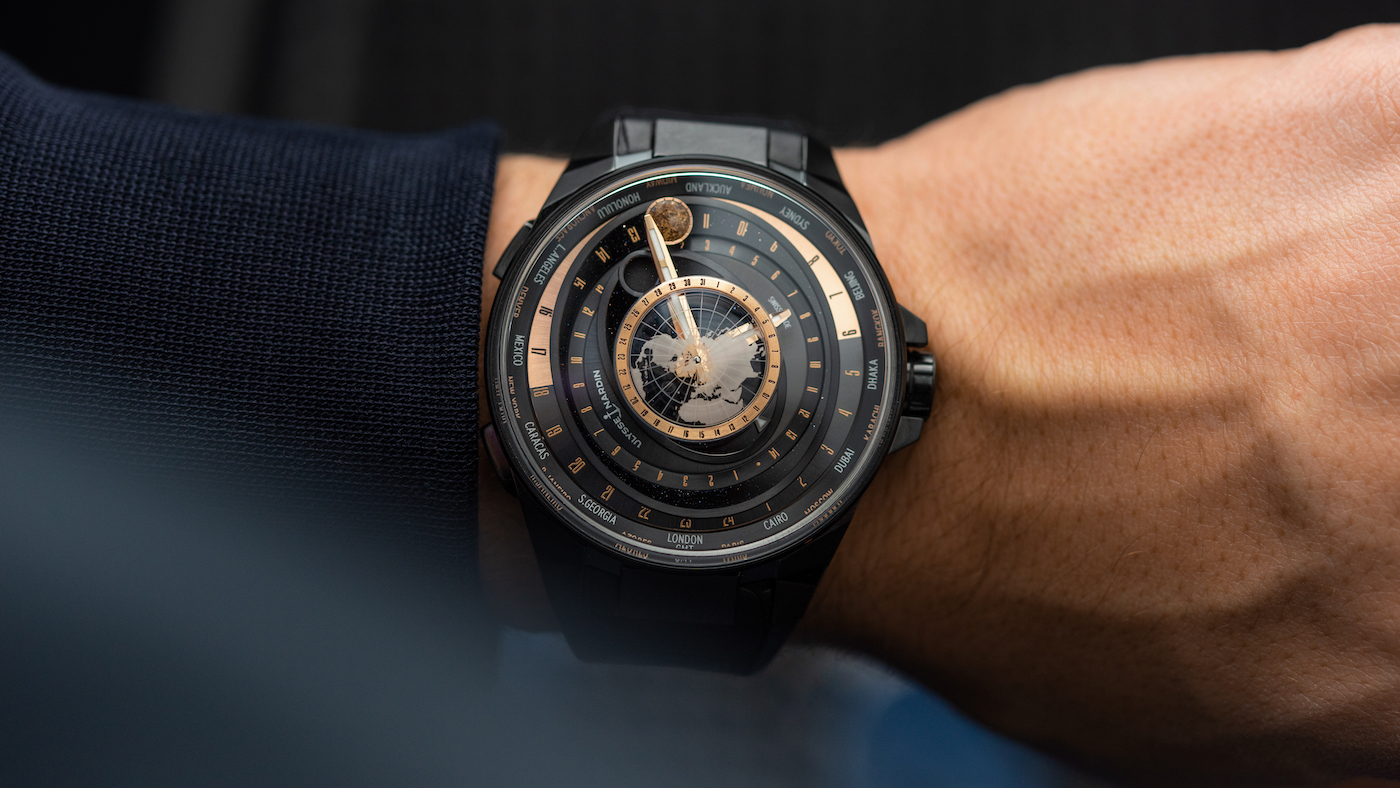 Appealing and original, the Blast Moonstruck remains nonetheless an instrument that materializes a certain idea of our solar system – somewhere in the vastness of the cosmos.

Complex in appearance, it is easy to read and also easy to adjust, as all the information can be set from the winding crown. A little concentration when correctly positioning all the useful information, from the reference city to the local time and date, suffices to ensure that the complication built into the automatic Manufacture caliber UN-106 subsequently manages all the displays on its own as long as the watch is worn. And when it isn’t, it just needs to be put back in the box supplied, which contains an automatic winder designed to take care of the winding and keep its calendar information accurate. 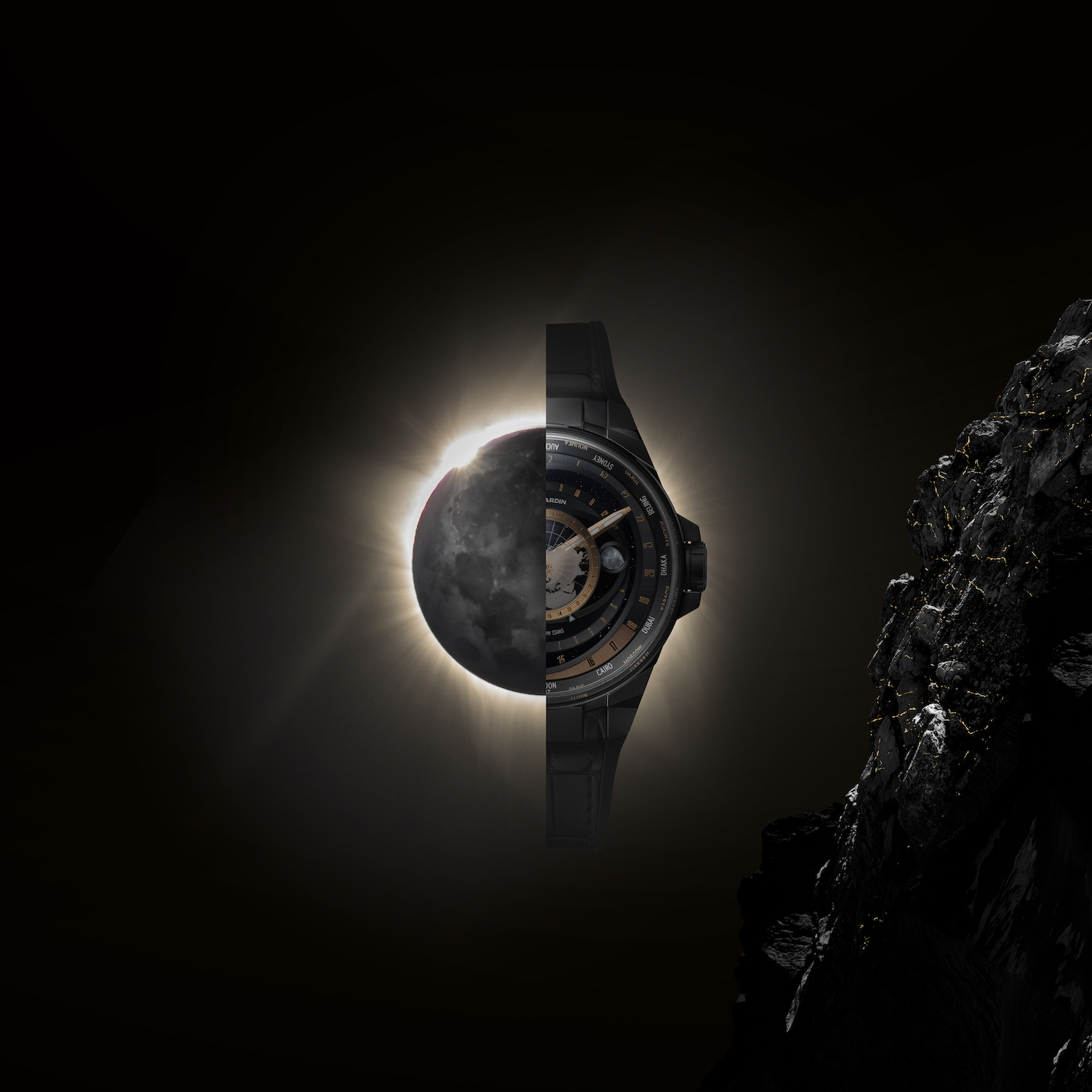 If it appears that the stars are randomly distributed in the cosmos, the Blast Moonstruck’s subtle mineral black dial decoration with glittering golden particles has not been left “to chance”.

Legend surrounding aventurine recounts that in the thirteenth century, on the island of Murano in Venice, home to the famous glass-makers, a craftsman accidentally, or “par aventure”, let some copper filings fall into a pot of molten glass, so creating aventurine glass, or “avventurina” in Italian, meaning “by chance”. The aventurine effect of this man-made mineral gives it the sparkling appearance that sailors often observe on the ocean’s surface in the darkness of night. 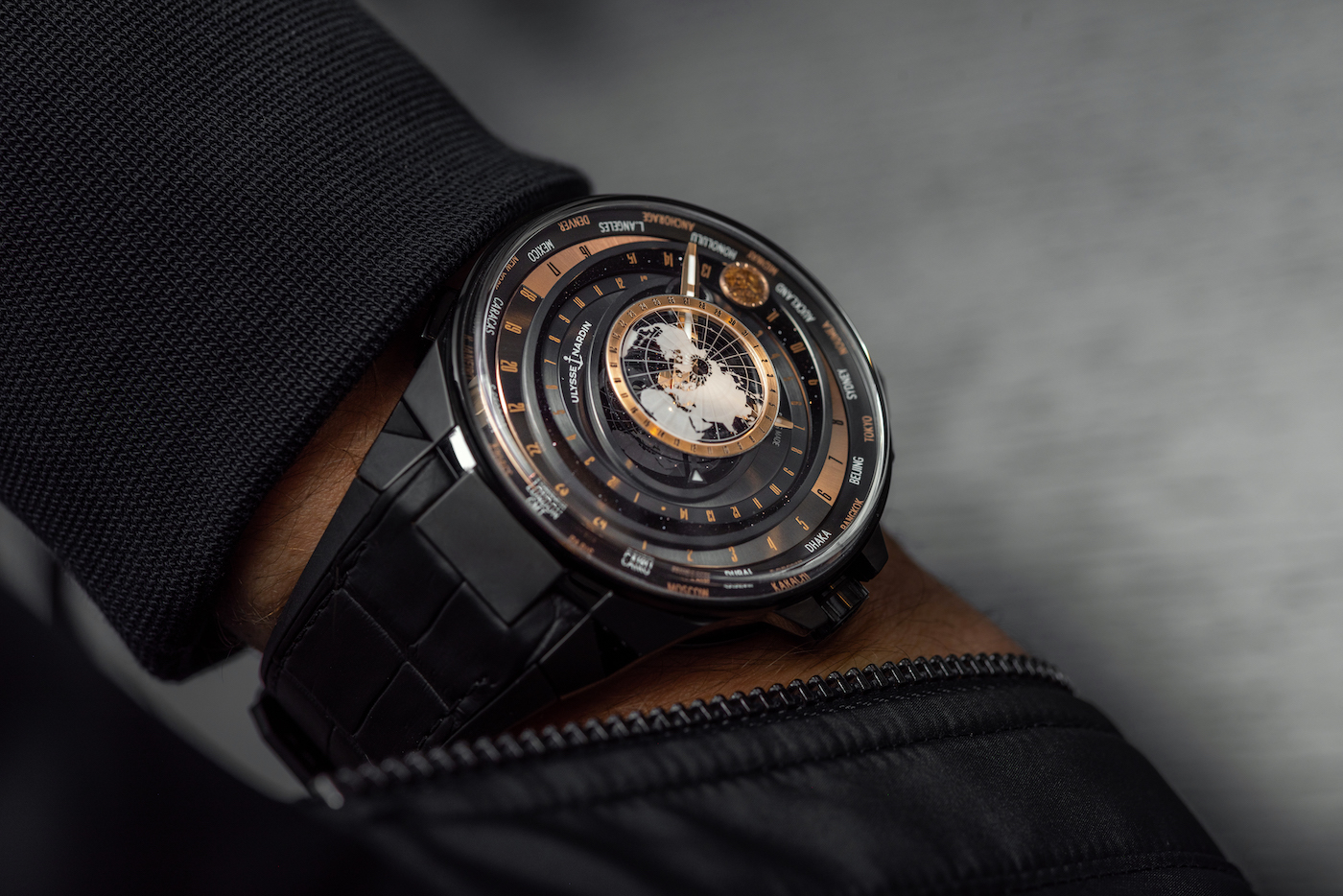 The Moonstruck is not intended to be an unnecessarily complicated watch, but a timepiece with a sober and efficient display, capable of rendering the celestial mechanics comprehensible to everyone. 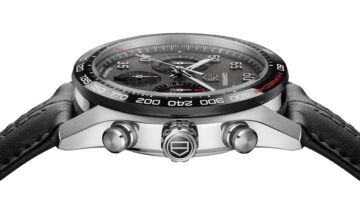 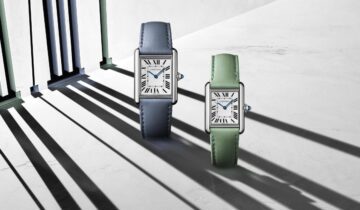 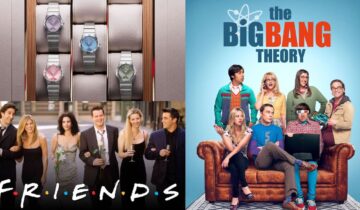 Watches That Resonate With Your Favourite TV Series