Maximilian Büsser has never stated that MB&F will never produce a chronograph. He did say, though, that MB&F would never produce a chronograph that looked like every other chronograph on the market. Those who spoke the MB&F language understood exactly what this meant. All good things take time to develop; better things take more time to develop, and after 17 years of producing horological art and 19 calibres later, MB&F has delivered something even better. 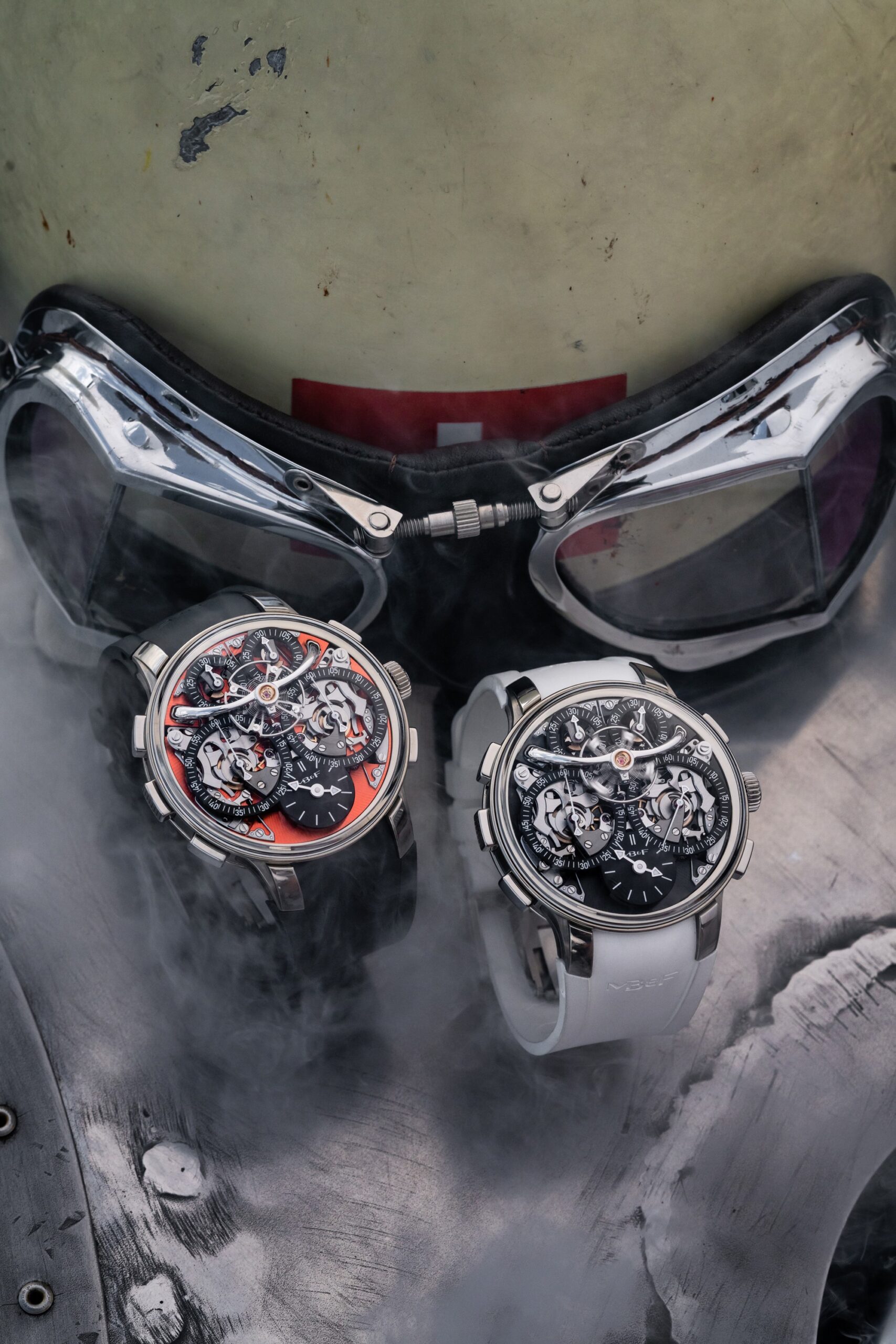 LM Sequential EVO, created by Stephen McDonnell, one of the first MB&F colleagues and friends, pushes the boundaries of what we thought chronographs could do. LM Sequential EVO, like the 2015 Legacy Machine Perpetual, the last big Stephen McDonnell movement for MB&F, required a complete rethinking of our most basic beliefs about chronograph manufacture. 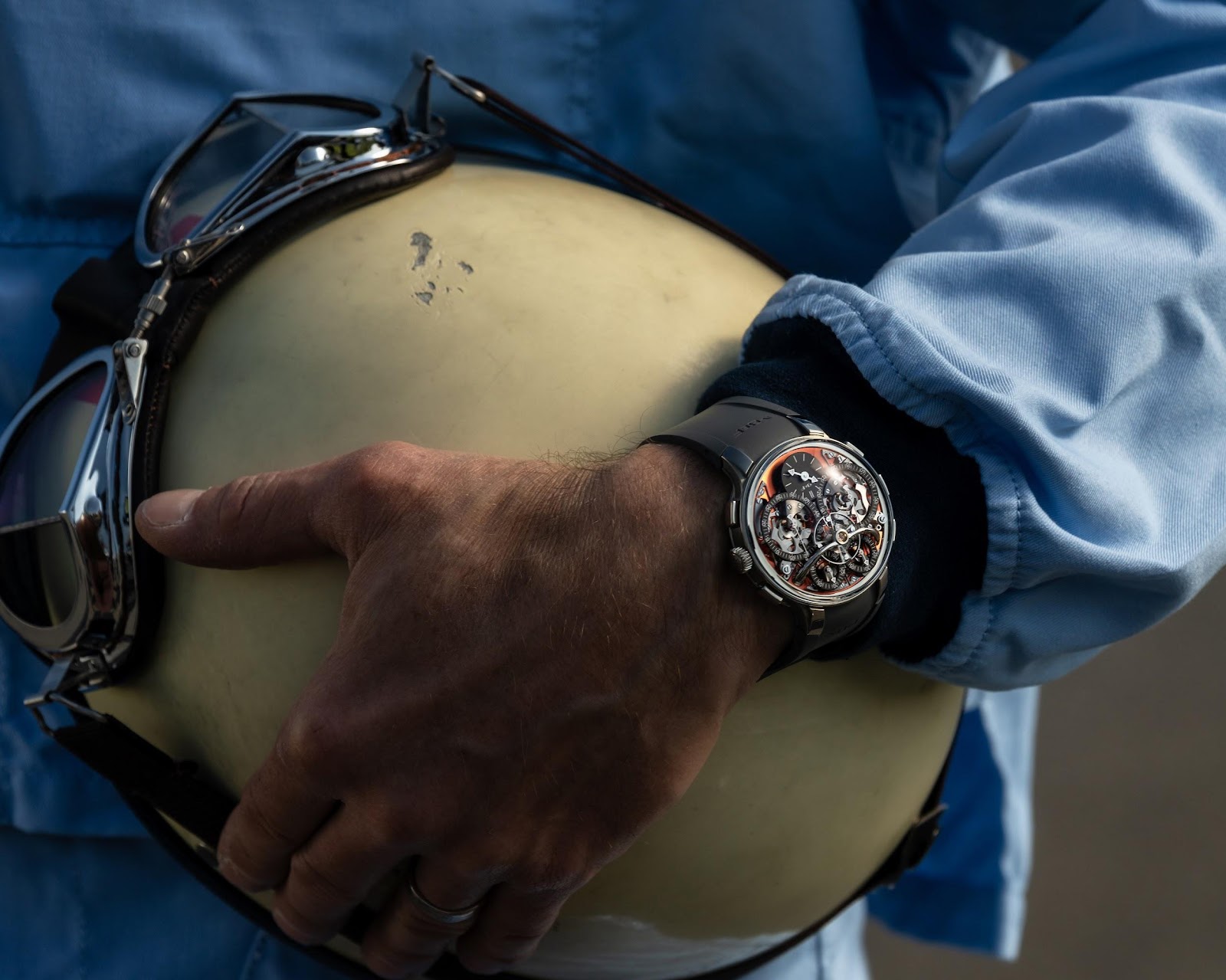 Two chronograph displays are featured on the dial plate of the LM Sequential EVO, which is available in atomic orange or coal black. One has a 9 o’clock seconds display and an 11 o’clock minutes display. The other has a 3 o’clock seconds display and a 1 o’clock minutes display. Using the start/stop and reset pushers on their respective sides of the case, each of these chronograph displays can be started, halted, and reset fully independently of the others. These are the four chronograph pushers that you’d expect to see on a timepiece with two chronograph movements.

However, there is a fifth pusher, the “Twinverter,” which is placed at 9 o’clock. This pusher is the secret to the LM Sequential EVO’s functionality being superior to any other chronograph timepiece. It is a binary switch that controls both chronograph systems, inverting the present start/stop status of each chronograph. This means that if both chronograph displays are stopped (either at zero or otherwise), pressing the Twinverter will force both to start at the same time. The Twinverter brings them both to a halt if they are both running. The Twinverter stops the one that is running and starts the one that is stopped if one is running and the other is stopped. 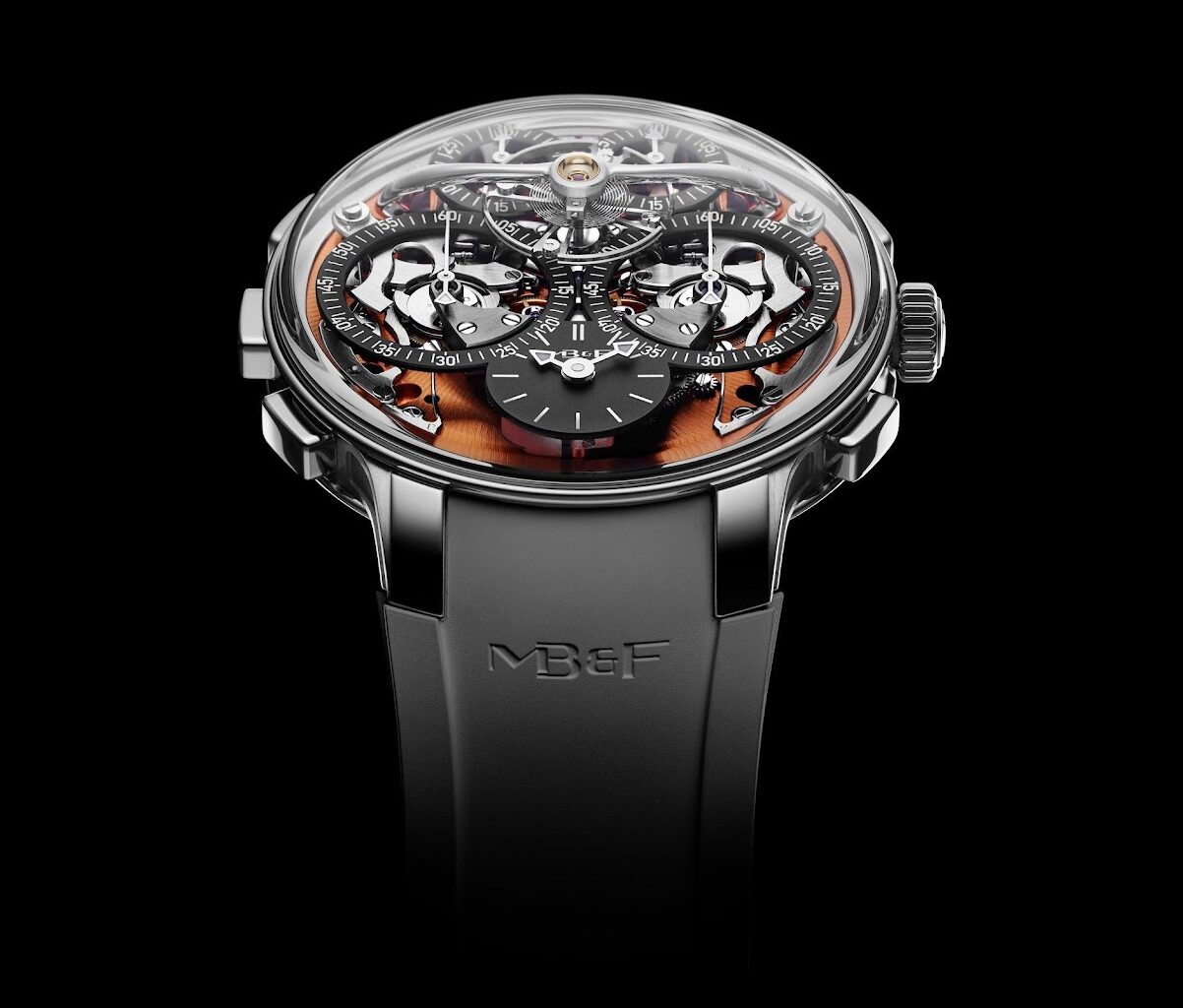 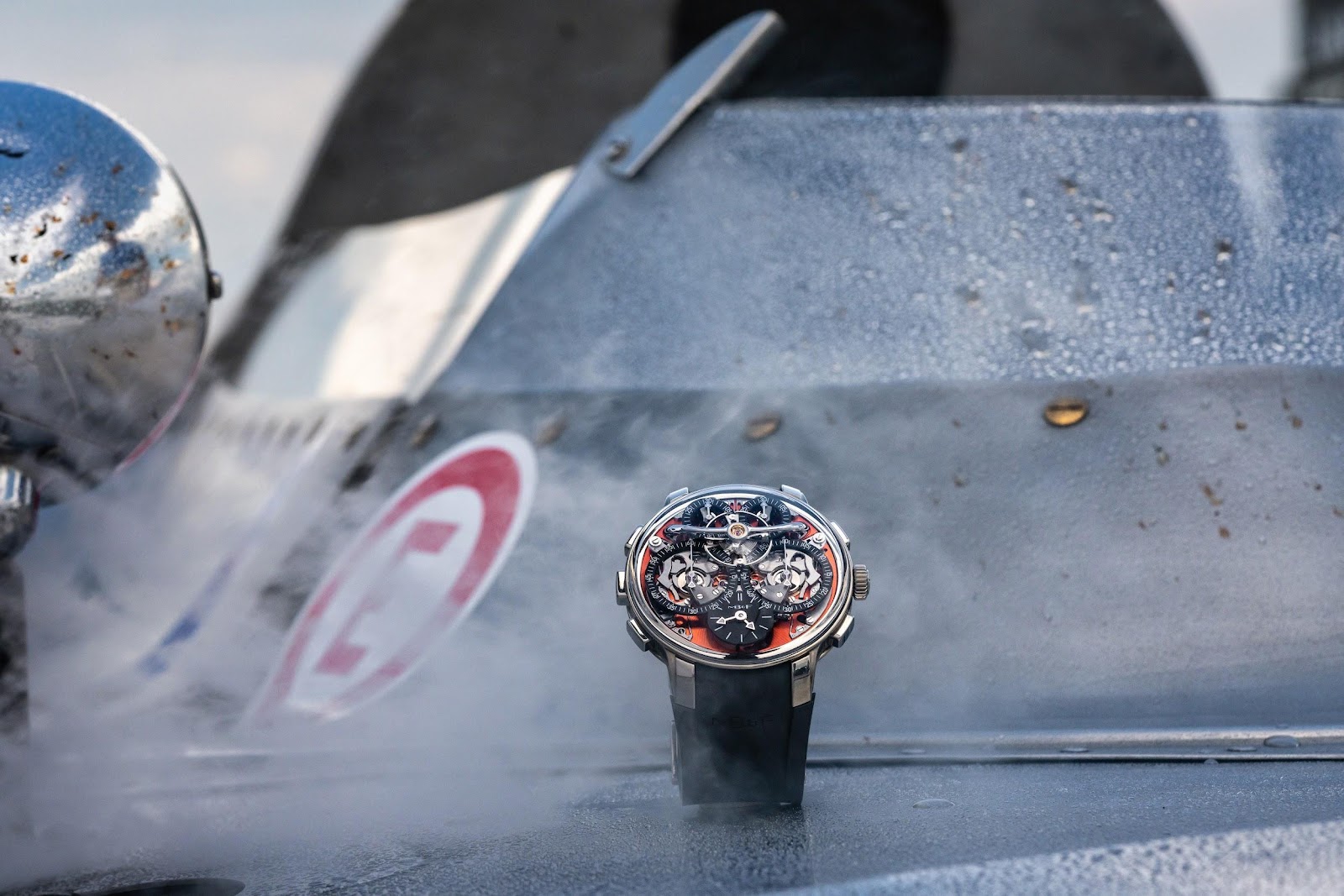 Simultaneous mode is used in situations where two competitors start at the same time, such as in a race. The Twinverter allows you to start both chronographs at the same time, but you can easily record the different finish points by pushing each chronograph’s individual start/stop button. It’s worth noting that the events can last longer than 60 seconds, which is the upper limit for the great majority of split-second chronographs.

The cumulative mode is widely used in the workplace, where you may wish to keep track of how much time you spend on two different projects as you transition between them during the day. By starting one chronograph when you begin working on one task, and then using the Twinverter when you shift focus to the second task (switching again when you go back to the first), you can easily track the amount of time you cumulatively spend on each task. Another example of this usage is the timing of a chess match. 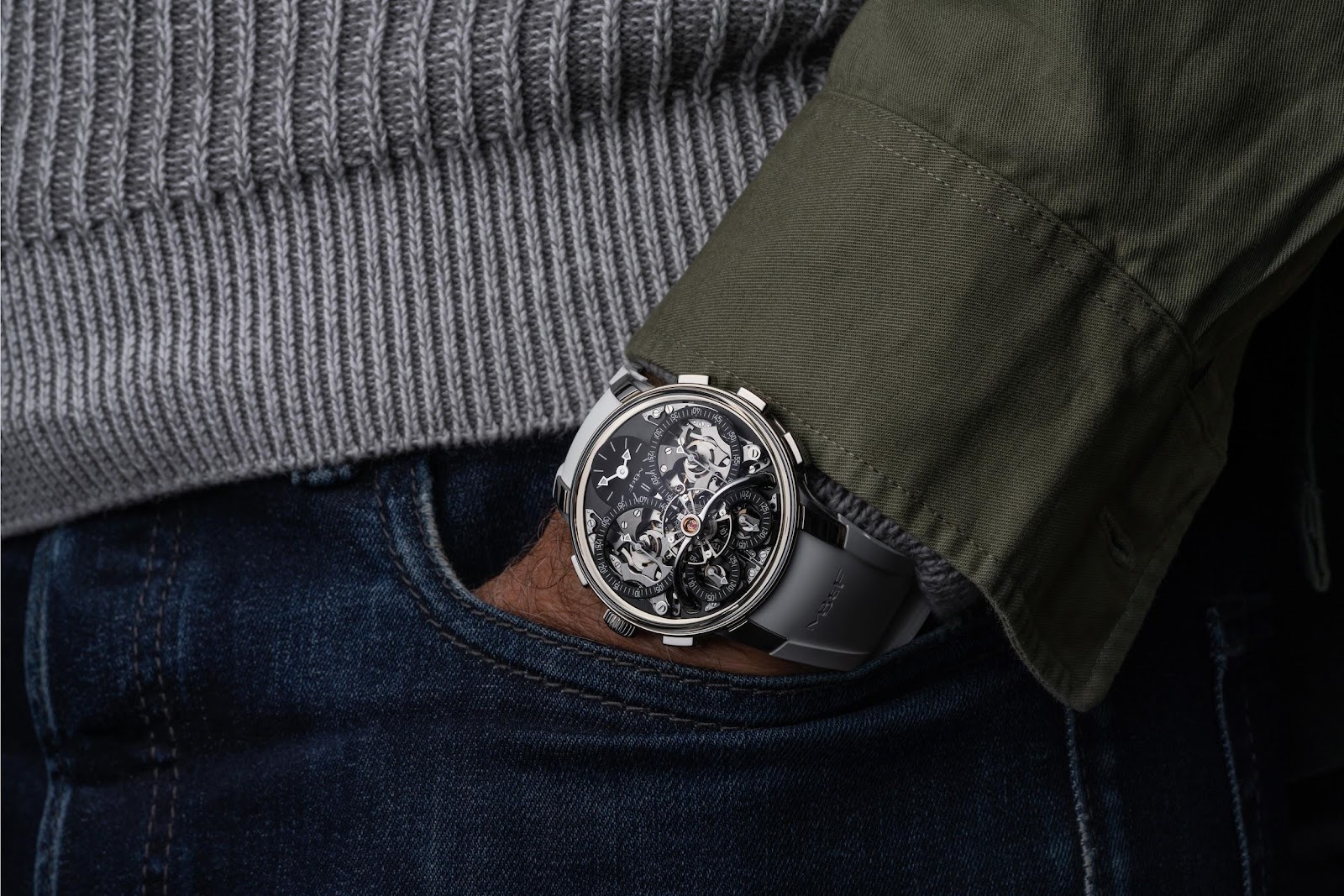 Sequential mode (or lap mode) has its greatest relevance in competitive sports, where it can be used to measure individual lap times. Starting one chronograph at the beginning of an event and using the Twinverter upon the completion of a lap instantly launches the second chronograph in order to time the next lap, while the first chronograph is stopped, allowing ample time for the timing result to be noted down. The stopped chronograph can then be reset to zero, ready to be relaunched with the Twinverter for the following lap. Thanks to its minutes totalisers, LM Sequential EVO can be used effectively in sporting events with average lap times of over a minute (which includes the vast majority of lap-racing sports).

Independent mode can be used for instance in the preparation of a meal, where different things need to be cooked for different periods of time, at different points in time. You would operate the two chronograph mechanisms via their respective pushers — for instance, starting one when you put your pasta into boiling water and starting the other when the vegetables go in the oven. In fact, this application of LM Sequential EVO comes in handy in all areas of personal productivity. 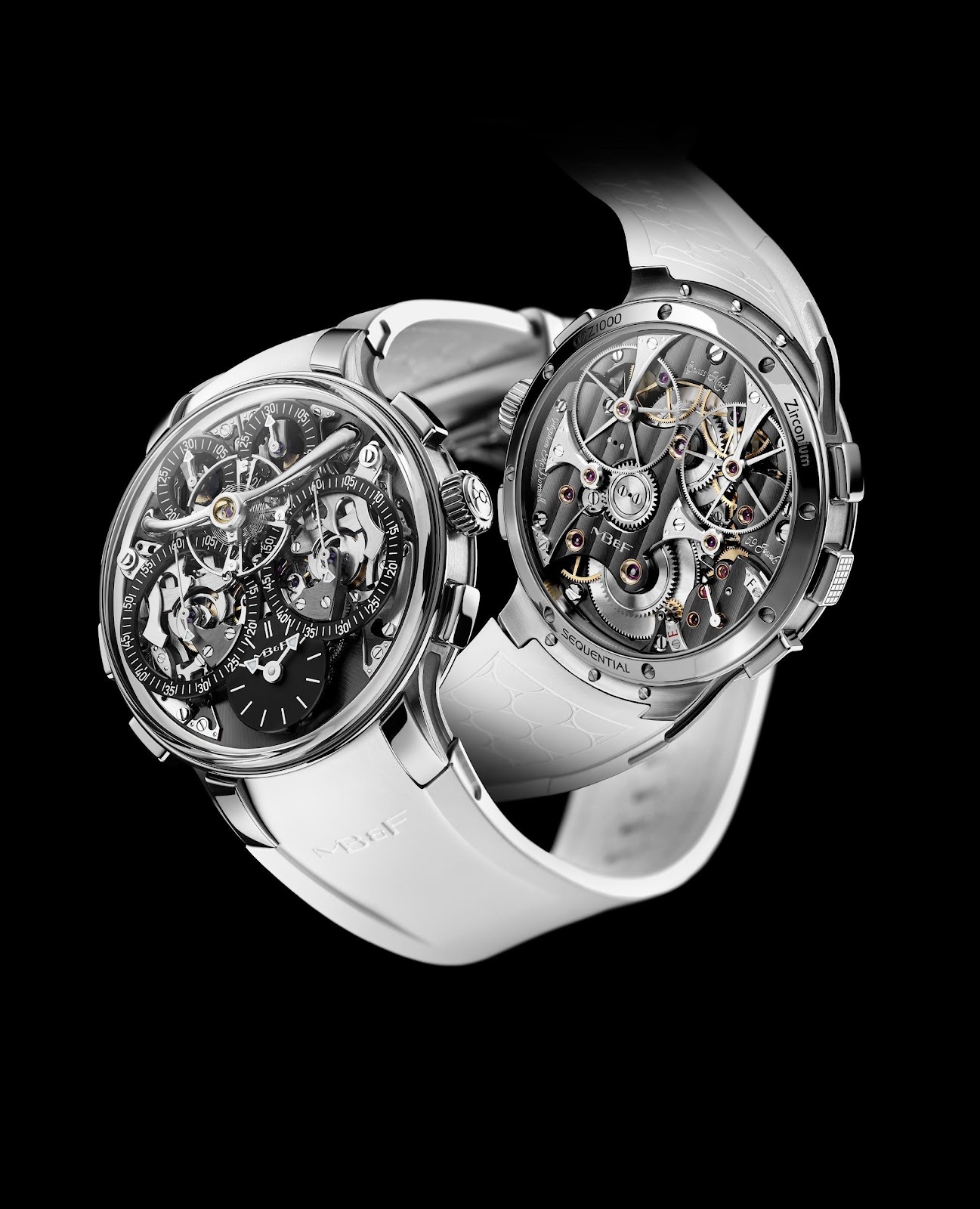 Most other high-concept chronographs that aim to expand the chronograph’s applications do so by adapting the mechanism to highly particular, sports-oriented scenarios. LM Sequential EVO, on the other hand, operates in every part of daily life, in situations that we are all familiar with. Its zirconium case, 80 metres of water resistance, and internal “FlexRing” dampening system give it unrivalled resiliency for such a complicated movement. All of this makes the “EVO” line an ideal home for MB&F’s first chronograph, strengthening the character established when the first EVO, the LM Perpetual EVO, was introduced in 2020: “not a watch for sports, but a watch for life.”

After all, despite its technical complexity, the LM Sequential EVO is simple to operate and, most importantly, functional. You could even be perplexed as to why no one has attempted it before. It appears so simple when you think about it; it’s as easy as 1-2-3. One timepiece with two chronograph movements that can be used in a variety of ways.

Switching it up: more about the engine

The Twinverter, Stephen McDonnell’s inventive fifth chronograph pusher, may appear to be a whole new concept — and it is in many ways. Those who are familiar with chronograph history, on the other hand, will recognise this concept’s origins in early chronograph systems.

Following innovations of chronograph apparatuses, which were also tied to track events, included a lever that was connected to many independent chronographs so that they could all be started at the same time, rather than having multiple timers operated separately (a sub-optimal system that inevitably incorporated small differences between the starting times of each). 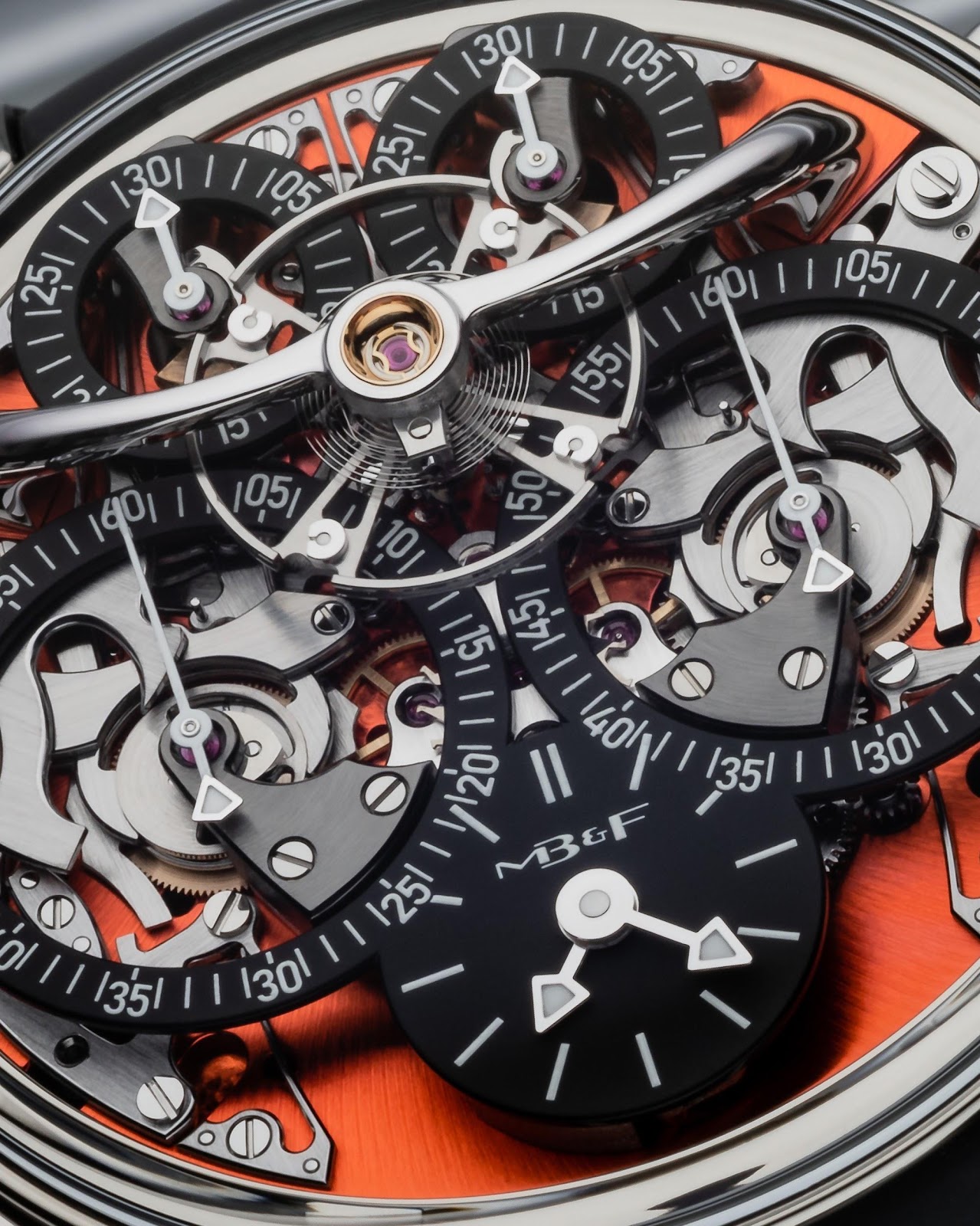 When Maximilian Büsser spoke to Stephen McDonnell in 2016, raising the possibility of a follow-up to Legacy Machine Perpetual (2015), the response from Stephen was four words long: “I have an idea.” It was a response as cryptic as it was exciting, particularly if you knew the kind of ideas that came from the mind of Stephen McDonnell. That conversation with Max accelerated a train of thought that Stephen had been mulling over for some time — that most modern chronographs were unable to adequately perform the job they had been designed for.

The combined chronograph lever immediately suggested itself to him as a way to ensure that race events could be measured with maximum precision with a manually operated mechanical chronograph. Allowing the chronographs systems to be operated separately meant that different timings could be taken and preserved long enough for the results to be recorded. 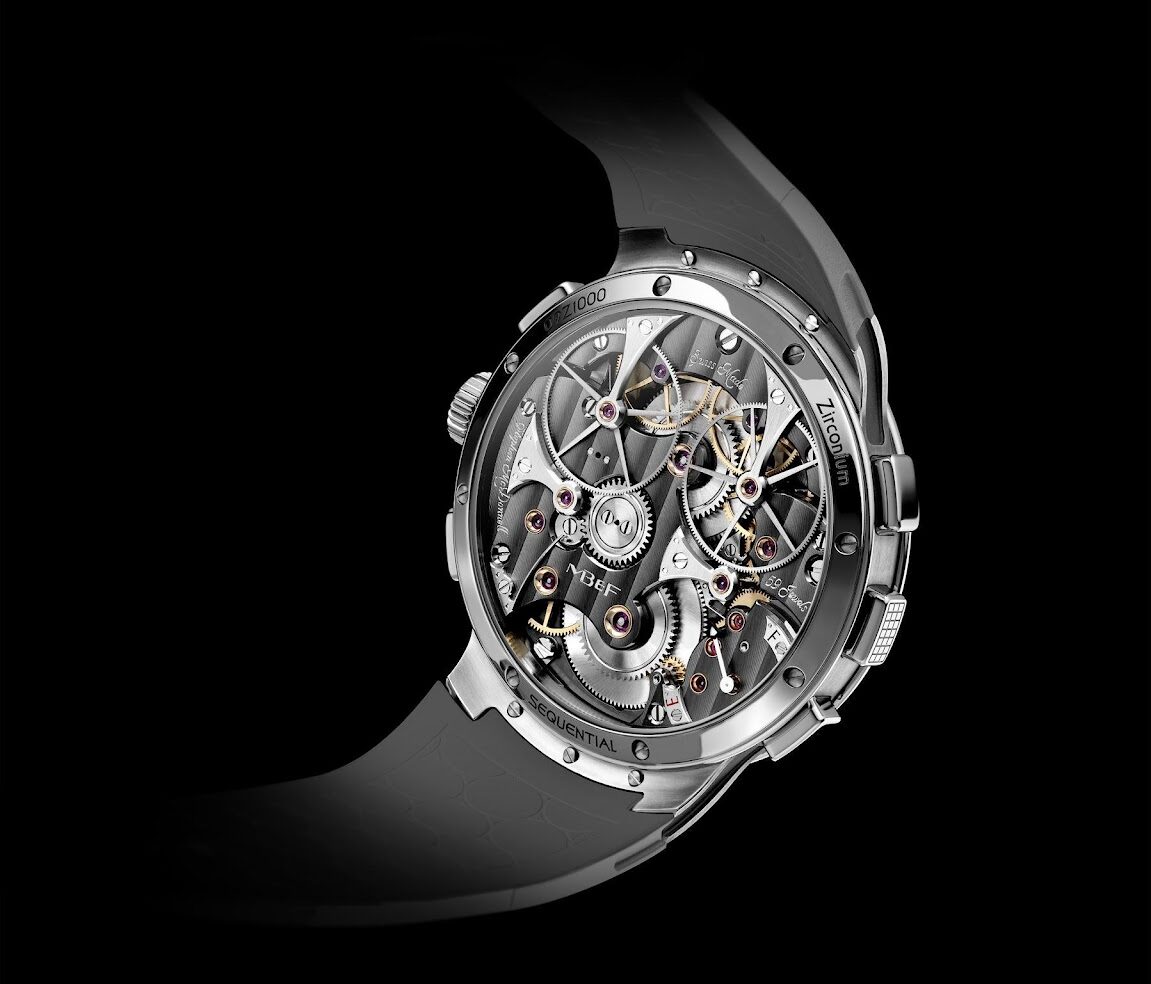 The EVO continues to evolve: learn more about the EVO collection

In 2020, Legacy Machine Perpetual EVO was released, bringing the EVO collection into the MB&F world. EVO based its identity on the Legacy Machine collection’s established codes, emphasising wearability, robustness, and versatility.

The LM Sequential EVO’s debut case material is zirconium, which was used in the premiere edition of the LM Perpetual EVO. It’s a silvery-grey metal with a rich lustre that’s lighter than stainless steel but tougher than titanium. Its hypoallergenic and antimicrobial capabilities, combined with these remarkable qualities, make it suitable for an active lifestyle watch. Because zirconium is known to spontaneously fire in powdered form, it is extremely risky to the machine unless under well-controlled environmental circumstances, which explains its scarcity in the timepiece industry. 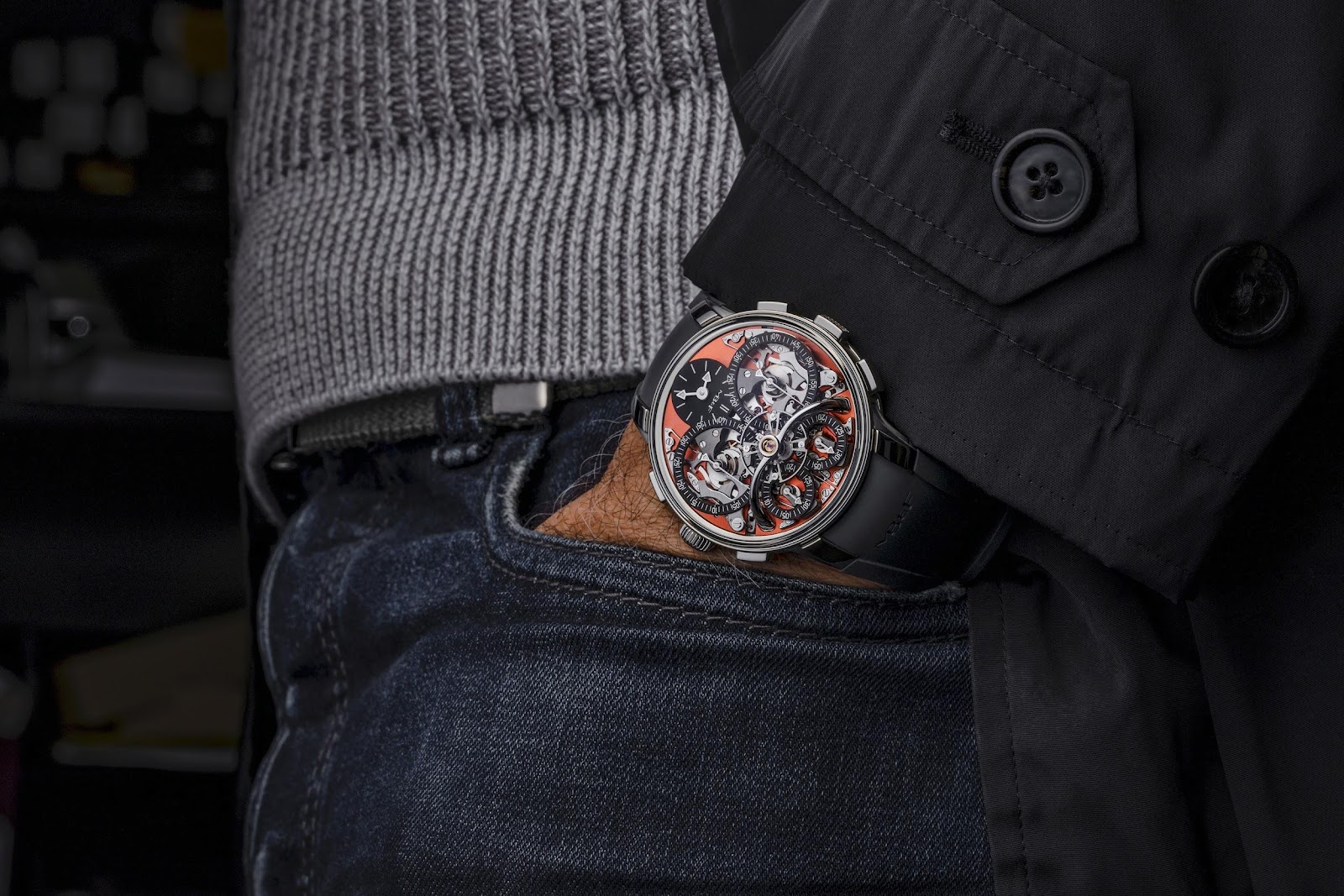 A no-bezel case design emphasises the movement within, allowing the finely balanced and symmetrical work of Stephen McDonnell to be fully showcased. In LM Sequential EVO, the iconic sapphire-crystal dome characteristic of the LM collection underwent a complicated shift in geometry in order to accommodate the placement of the 3Hz (21,600vph) suspended balance in relation to the chronograph displays.

The FlexRing, an annular dampener inserted between case and movement that provides shock absorption along both vertical and lateral axes, adds to the wearer’s comfort (both on the wrist and in the mind). The dampener, which is machined from a single block of stainless steel, provides great resilience to the movement inside, ensuring that EVO is a watch that can and will accompany you through all facets of an active life.

As MB&F approaches the end of its second decade, it’s only fitting that someone who was instrumental in bringing the brand to life is also instrumental in bringing it to a new level of horological respectability. The MB&F 20th calibre is more than a chronometer. It’s a timepiece that documents the relationship between Maximilian Büsser, the brand he founded, and the watchmaker who was there from the start. 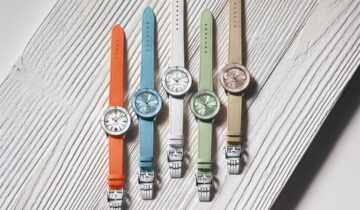 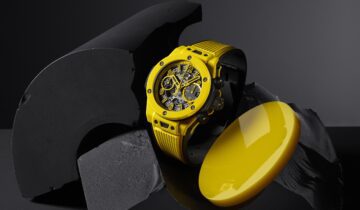 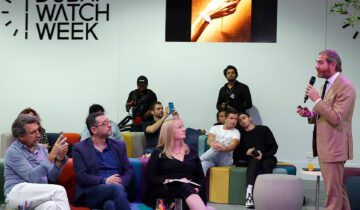