In our present, there’s more than just utility to a timekeeper, there’s emotion. Heritage, legitimacy and expertise bring a different flavour to fine watchmaking. But one cannot ignore that necessity was once the mother of invention. Watches, other than being able to tell time, morphed into work tools of the analogue age, with doctors, sportsmen, the armed forces, back then. While in the digital age, the appeal for analogue, is more about a sense of perspective, a sense of belonging, an attachment to history, of reliving an era gone by. 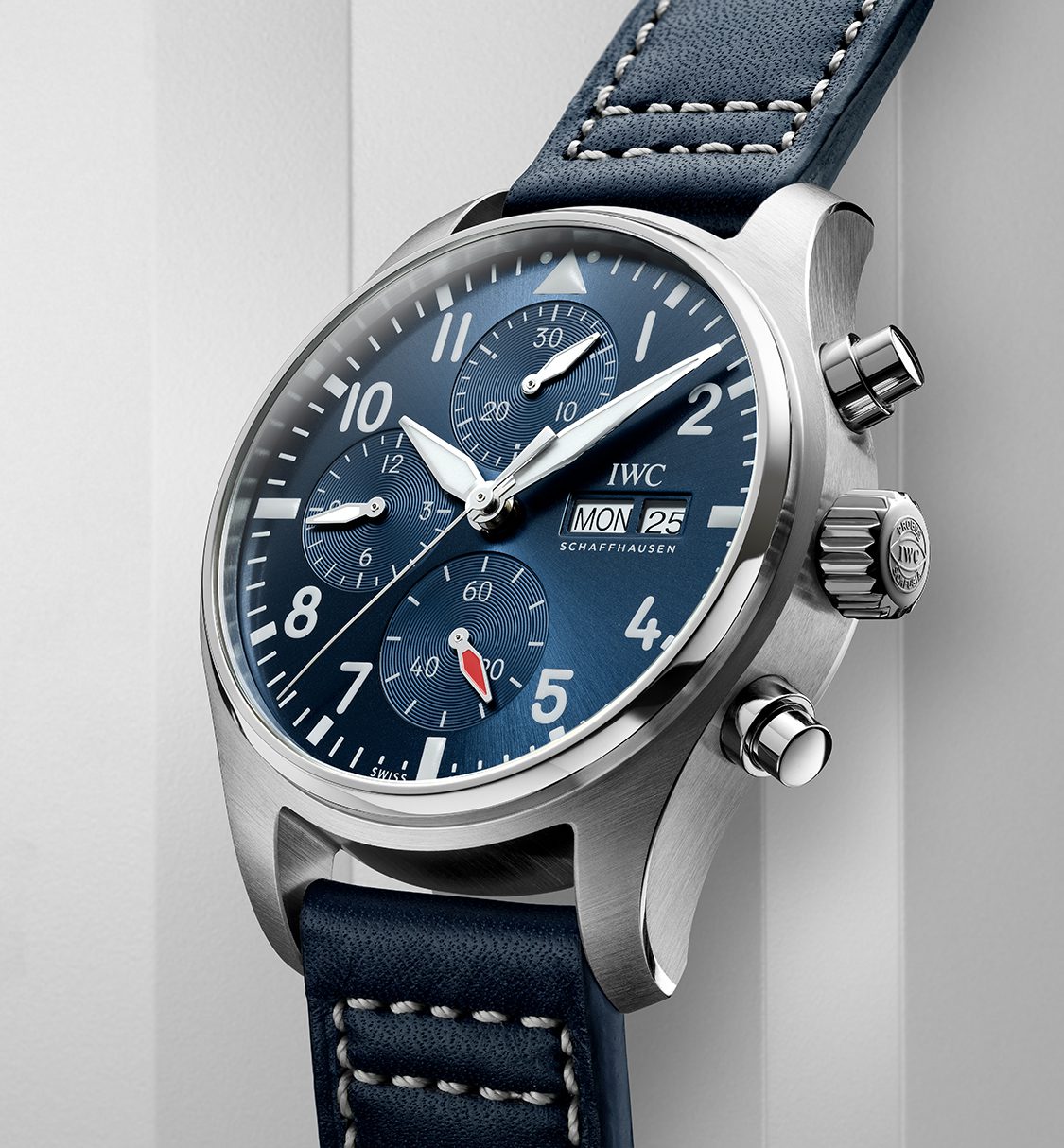 No other complication is as popular as the chronograph. It owes its appeal partly to a distinctive design featuring sub-dials and pushbuttons that are the very essence of a “tool watch”. At the same time, its stopwatch function offers countless possibilities for use in everyday life.

Mechanical chronographs are complex devices incorporating numerous components such as springs, wheels and levers. Their design and production are an engineering feat mastered by only a handful of watch manufacturers. Five years in development, the 69000-calibre family is IWC’s third in-house chronograph and once again serves to underscore the company’s engineering expertise. 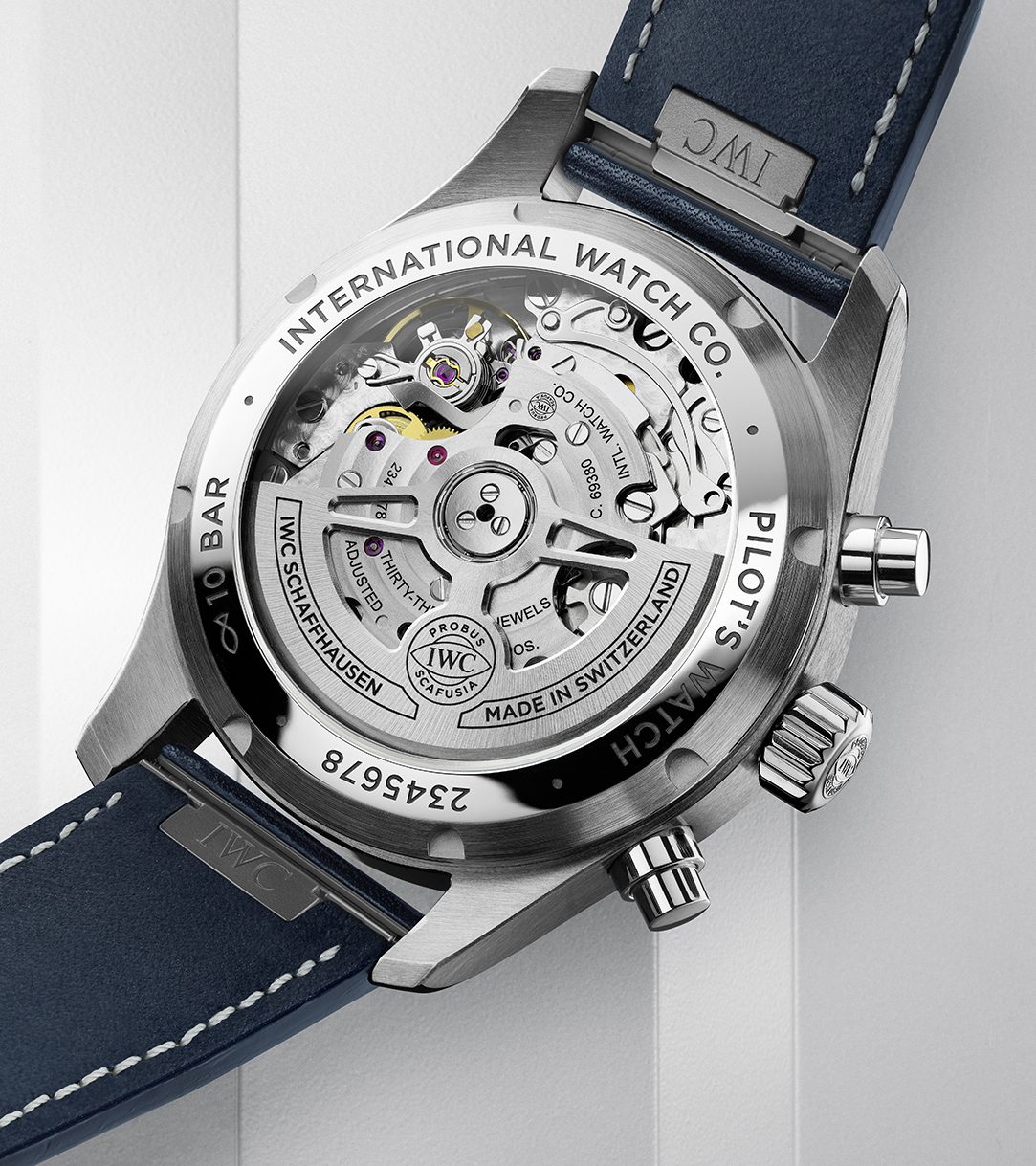 The 69385 calibre used for the new Pilot’s Watch Chronograph 41 (Ref. IW3881) contains 231 individual parts. It displays stop times on two sub-dials and also features a display for the day of the week and the date. The chronograph measures individual and aggregate stop times up to 12 hours and seamlessly integrates with the basic movement. And the design not only gives the watch its compact dimensions: the fact that all the components are perfectly geared towards each other also makes the mechanism unusually robust and reliable.

As its basis, a chronograph always takes a classic watch movement. The mechanism is connected to the movement using a so-called sliding coupling system. In the case of the 69000-calibre family, this is achieved using a horizontal gear coupling with an oscillating pinion. The lower end of the pinion connects continuously with the fourth wheel in the basic movement. When the start-stop button is pressed, the clutch lever pushes the inclined pinion into a vertical position and causes it to engage with the chronograph gear.

The heart of every chronograph, however, is the control unit, a mechanical program that switches the stopwatch function on and off and resets the mechanism. This unit also blocks the reset function when the watch is timing an event. Inadvertently operating the reset button at this point could damage the sensitive mechanism.

To control this sequence, movements in the 69000-calibre family feature a column wheel that resembles the rook on a chessboard and has two functional levels. Below it is a triangular-shaped tooth system that moves the column wheel forward by one position with each push of the start/stop button. On the upper level is a circle comprising six vertical columns. These columns and the recesses between them represent the chronograph’s two switching states: one recess stands for “chronograph on”, one column signals “chronograph off”. 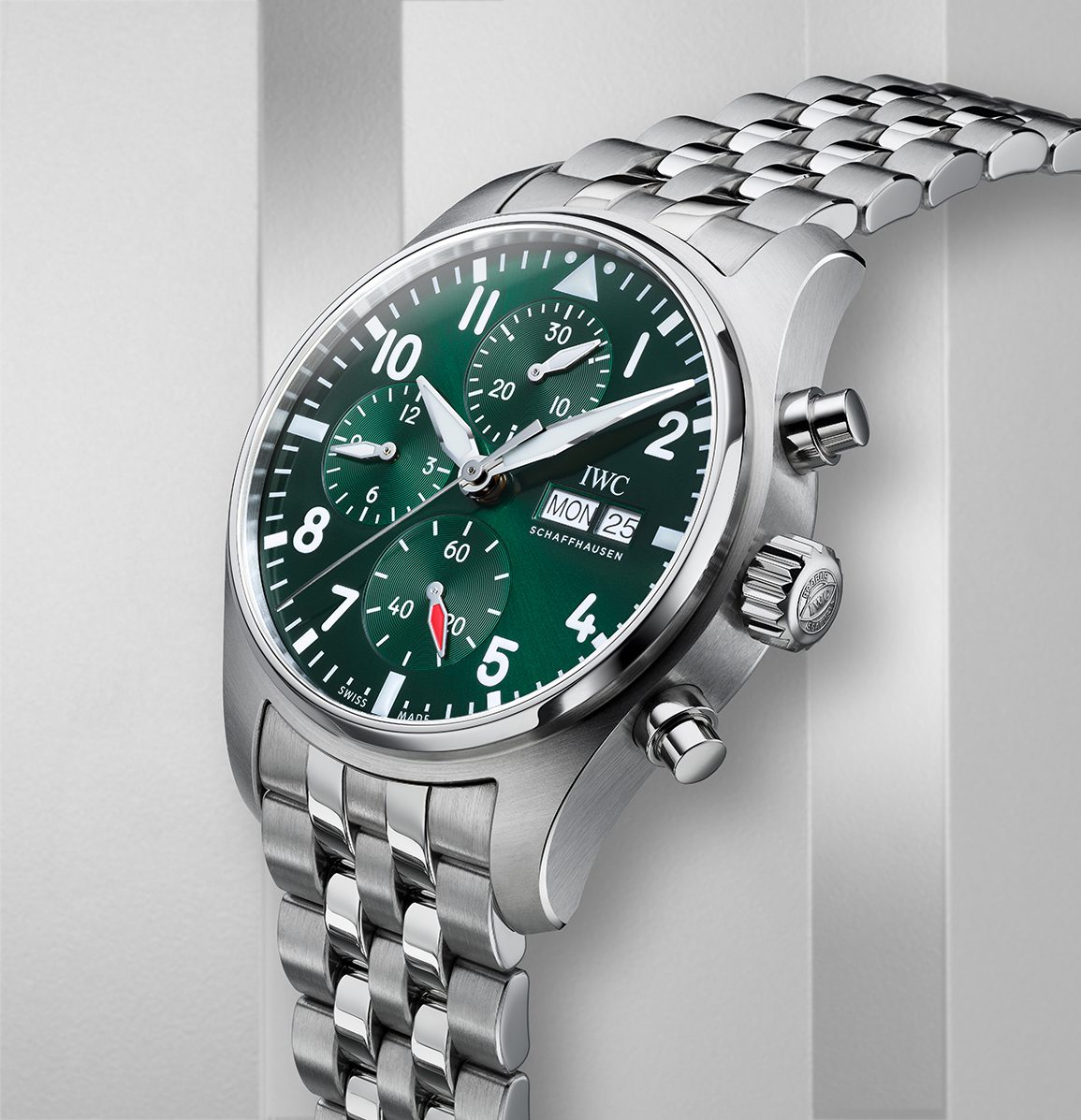 Compared with the simpler cam-based switching principle, the column wheel still represents the more intricate, but also more beautiful chronograph design. The manufacture of this component, which can be seen in action through the glass back of the Pilot’s Watch Chronograph 41 (Ref. IW3881), is extremely demanding. The column wheel is milled from a blank and subsequently requires extensive finishing. For the chronograph to function precisely, it needs to be highly wear-resistant and comply with minimal tolerances. Another advantage of this design is that the chronograph’s switching states are clearly defined at all times. The functions used to activate the mechanism are very precise and associated with low mechanical resistance. 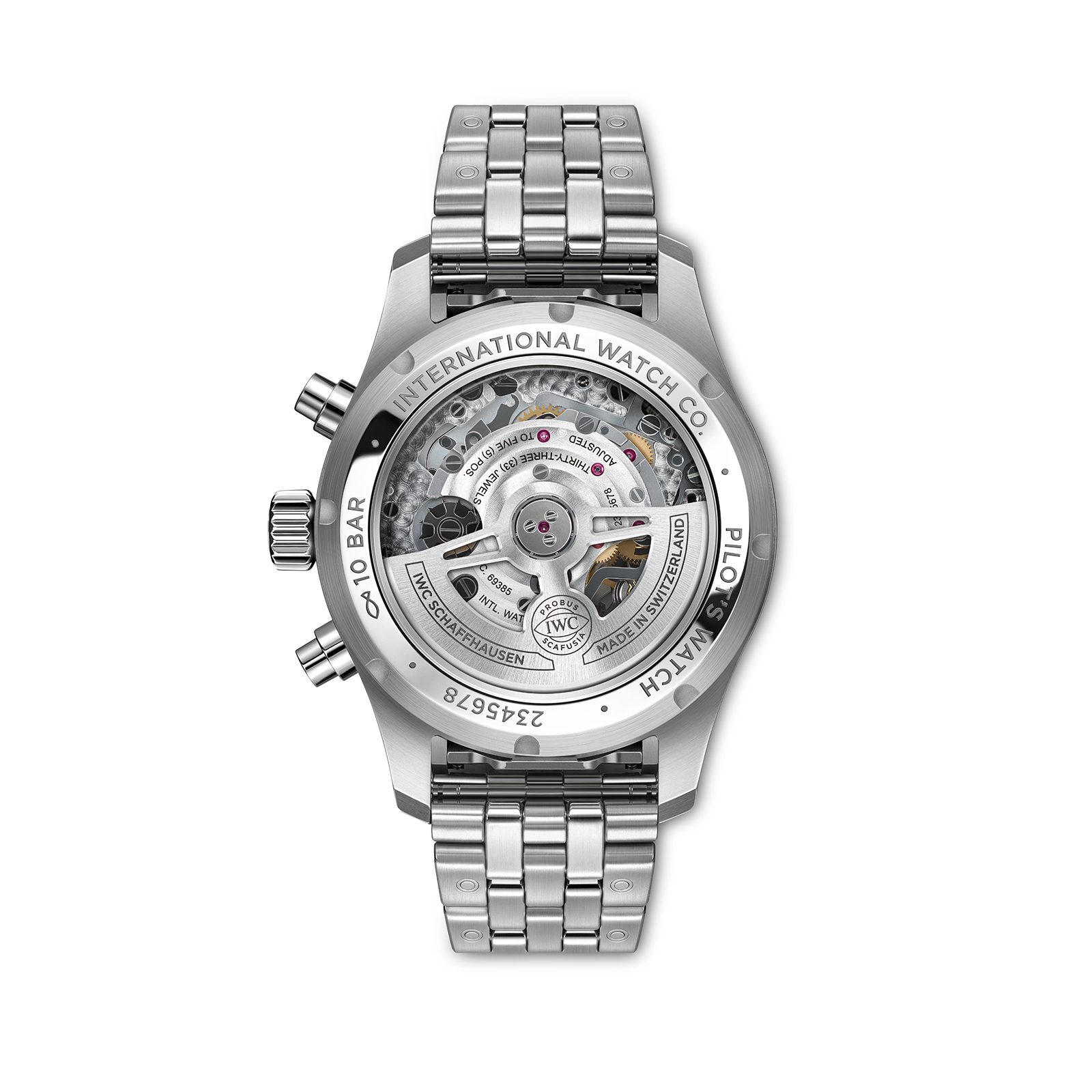 Apart from the integrated design and column wheel construction, however, there is another reason for the unusually high quality of the 69000-calibre family. It lies in the fact that IWC uses an integrated quality management system to monitor the entire process, from the development of the movement through parts production and assembly to final inspection. As early as the type approval stage, a new calibre must meet the most stringent requirements. On a specially designed test bench, for example, push- buttons are actuated 30,000 times to test their resistance to wear and tear.

Assembly of the 69000-calibre family takes place on a dedicated line and is divided into several small steps. This arrangement integrates quality control at each stage in the process. Following assembly and fine-tuning, the movements are placed in specially developed cells and put through their paces for 15 days. After the movements are inserted into the case, they undergo a demanding final check lasting 500 hours. Only movements that successfully clear all these hurdles find their way onto the wrists of their proud new owners. 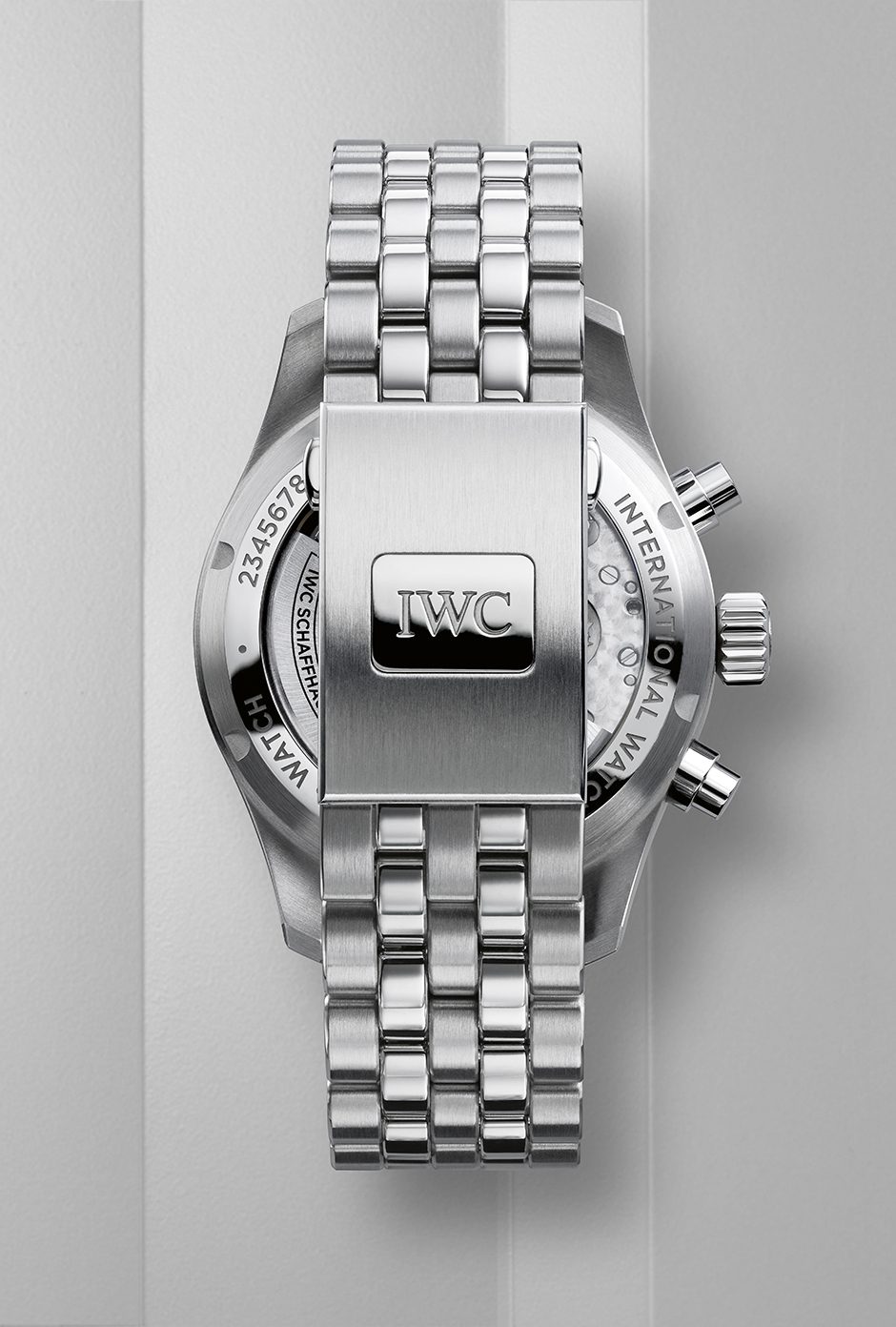 We find the new quick-change aspect extremely practical, changing between a leather strap and a metal bracelet, with just a push. But more so, the joy of having an exhibition case-back on this column wheel chronograph makes one want to just start-stop-reset the chrono, watching the mechanism click into action. Just like a fascinated child riding up and down the elevator. 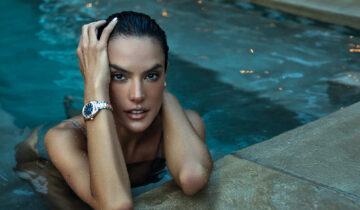 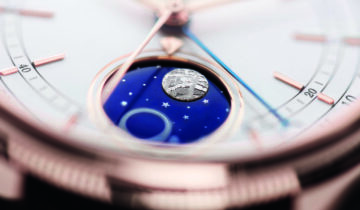 Moonphases To Love and Covet: A Complication That Trumps Want over Need