A little by accident, a little by the interest in mechanical craftsmanship, and a little by the love for technicality – synchrony which gave birth to the Finnish brand Sarpaneva. Headed by Stepan Sarpaneva, he returned to Finland in 2003 to launch his own brand after spending several years working in Switzerland. Since then, the self-taught Finnish watchmaker has developed his own unique aesthetic. Stepan creates exceptional timepieces with his unique designs. 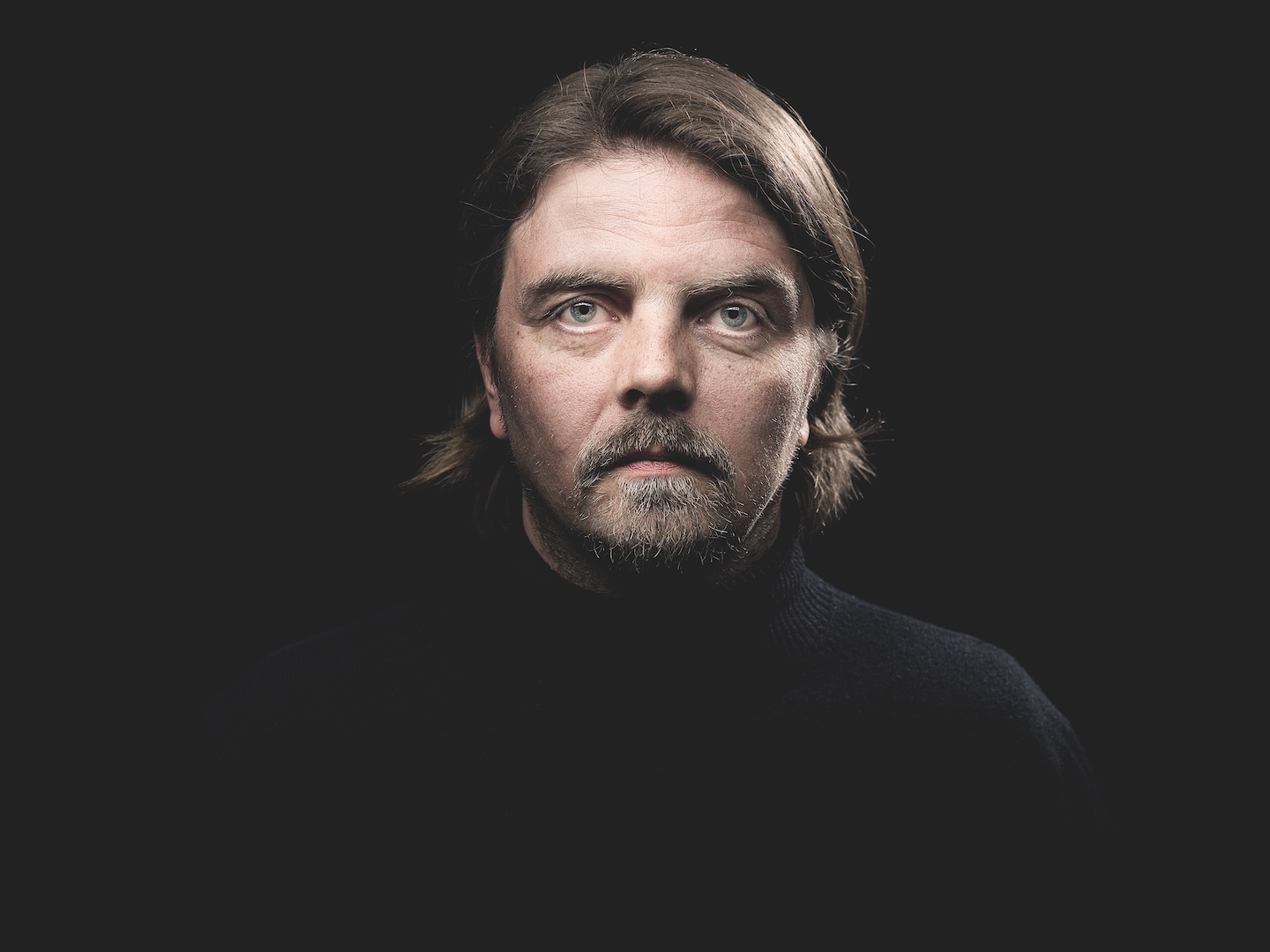 Watchmaking is an extremely specific craft. If you don’t stick to the guidelines, your watch won’t function. Almost nothing has changed over the centuries, but we still use mechanical watches. Watches still keep time in terms of hours, minutes, and seconds, and their mechanisms use the same ticking mechanism. And this gave Stefan Sarpaneva enough room to play with watches only to create the most iconic Moomin watches!

The Hour Markers caught up with CEO Stepan Sarpaneva to understand the history of the brand, its mechanics and more! Here’s how the conversation unfolded!

THM: We’ve heard you have worked with several great watchmakers. How did your watchmaking journey start?

Stepan Sarpaneva: I started my journey when I joined the Finnish School of Watchmaking in 1989 and graduated in 1992. After that in 1994, I moved to Switzerland for further studies at WOSTEP. It was then that I understood that watchmaking was what I wanted to do since there they were making new watches which was really interesting to do rather than repair old watches back in Finland. I applied to 30 different companies and ended up getting placed at Rolex in Sweden and Piaget in Switzerland. I started working at Piaget for a few years and then completed the course on complicated watches. 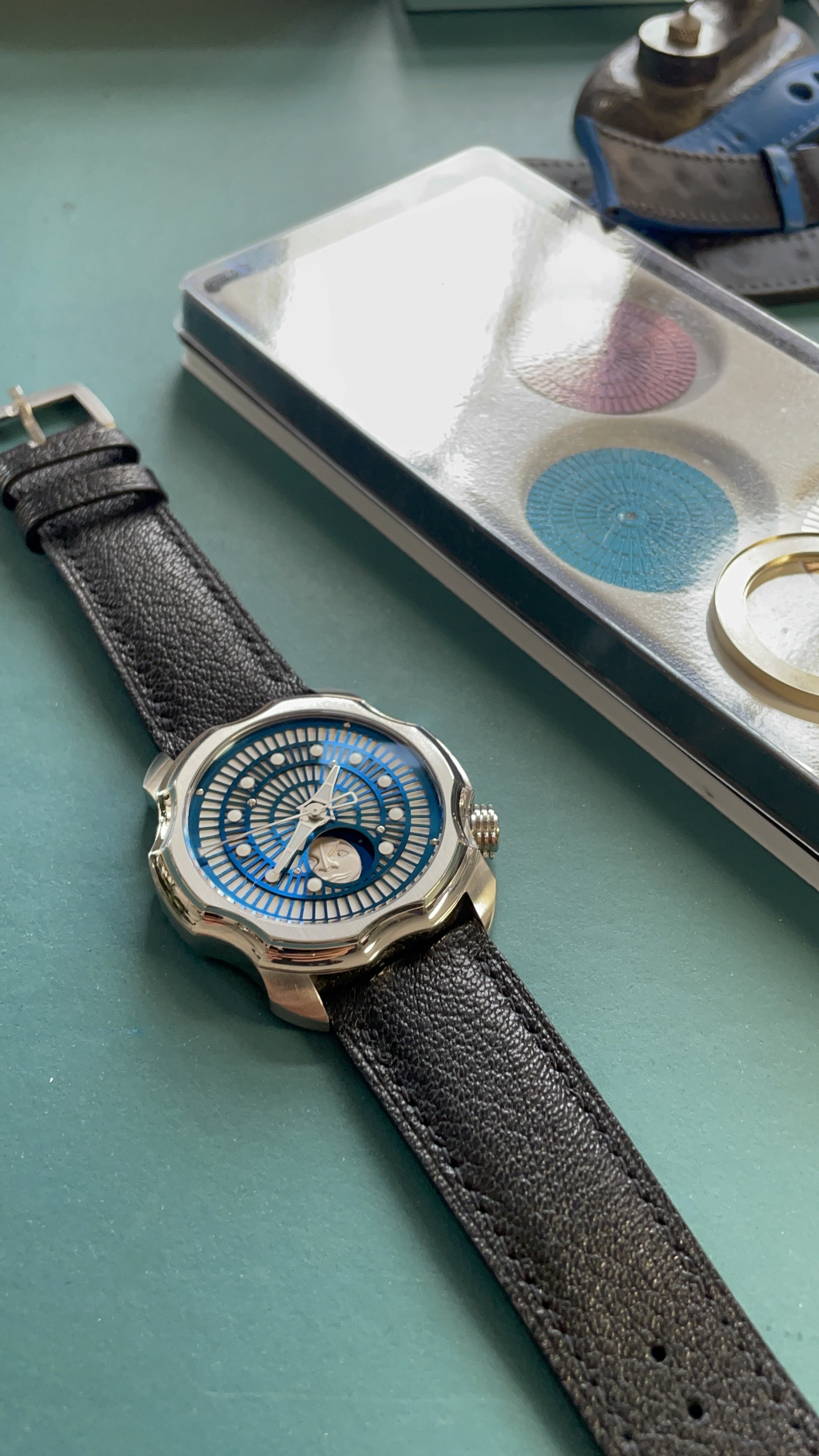 Following that, I worked with Parmigiani and Kari Voutilainen. At the latter, we worked in the department called Pièces uniques and we worked on unique pieces and complications. Lastly, I worked with master watchmakers such as Vianney Halter followed by Christophe Claret and then finally moved back to Finland in 2002. Christophe gave me work where I was making movements for him for 4 years until I started my own brand. From 2003-2007, independent watchmaking did not exist and watches weren’t highly priced. I used to make 5 watches a year. Post 2007, it did get better.

THM: In 2007-2008, you received a huge watch order for which you needed several watchmakers on board. Tell us about that…

Stepan Sarpaneva: In 2008, I signed a contract to export watches to Asia in 10 different countries. Things didn’t end up as planned due to the economic crash in 2009. So, I waived myself from the contract. I learned my lesson that I wanted to be an artist and not a bigger brand. From 2009 to 2019 it was a huge struggle because people value you only if you invest in your company. When you make only certain watches a year, it’s a slow step since people find you only via the internet. The Moomin project during COVID really opened the gates for us. Social media is the only channel we operate through. 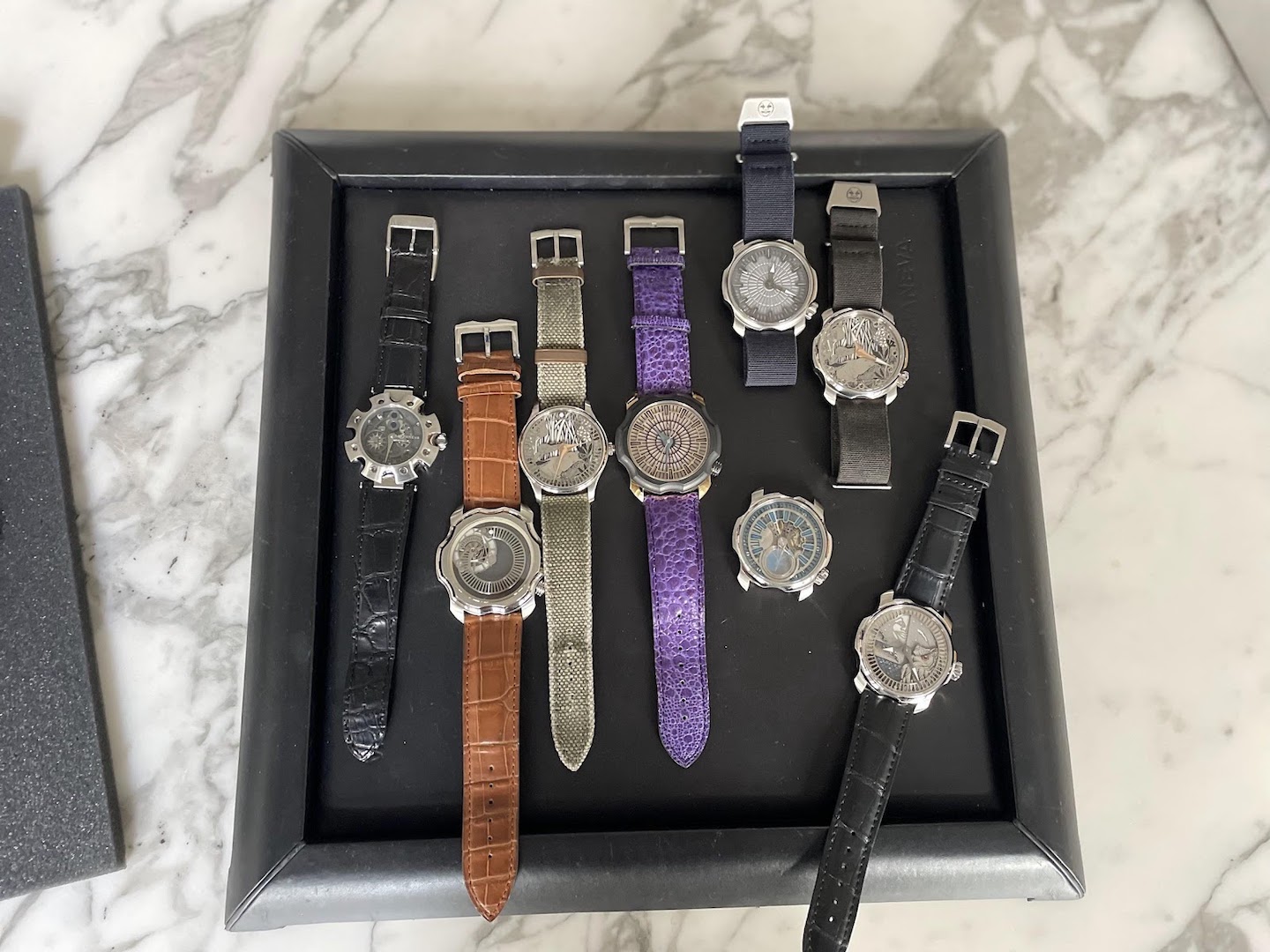 THM: A lot of successful independent watchmakers still manufacture their watches in Switzerland. Why did you move out to Finland considering you are the only person making 40-50 watches per year here? Isn’t it a big challenge in terms of materials, skillset, mechanics, etc?

Stepan Sarpaneva: It definitely is a big challenge. But it’s also good because I have my head out of the box. In Switzerland, you tend to follow the same path. I prefer being an outsider. My way of work fits my style. It’s about the know-how. I’m a watchmaker who makes my kind of watches, I’m not a watch designer, but design the watches that I make. In Switzerland, there are many people doing their own things and a single person isn’t capable of doing the whole set. I don’t sign on my watch dials. Nobody asks who made this watch because my design is my name. 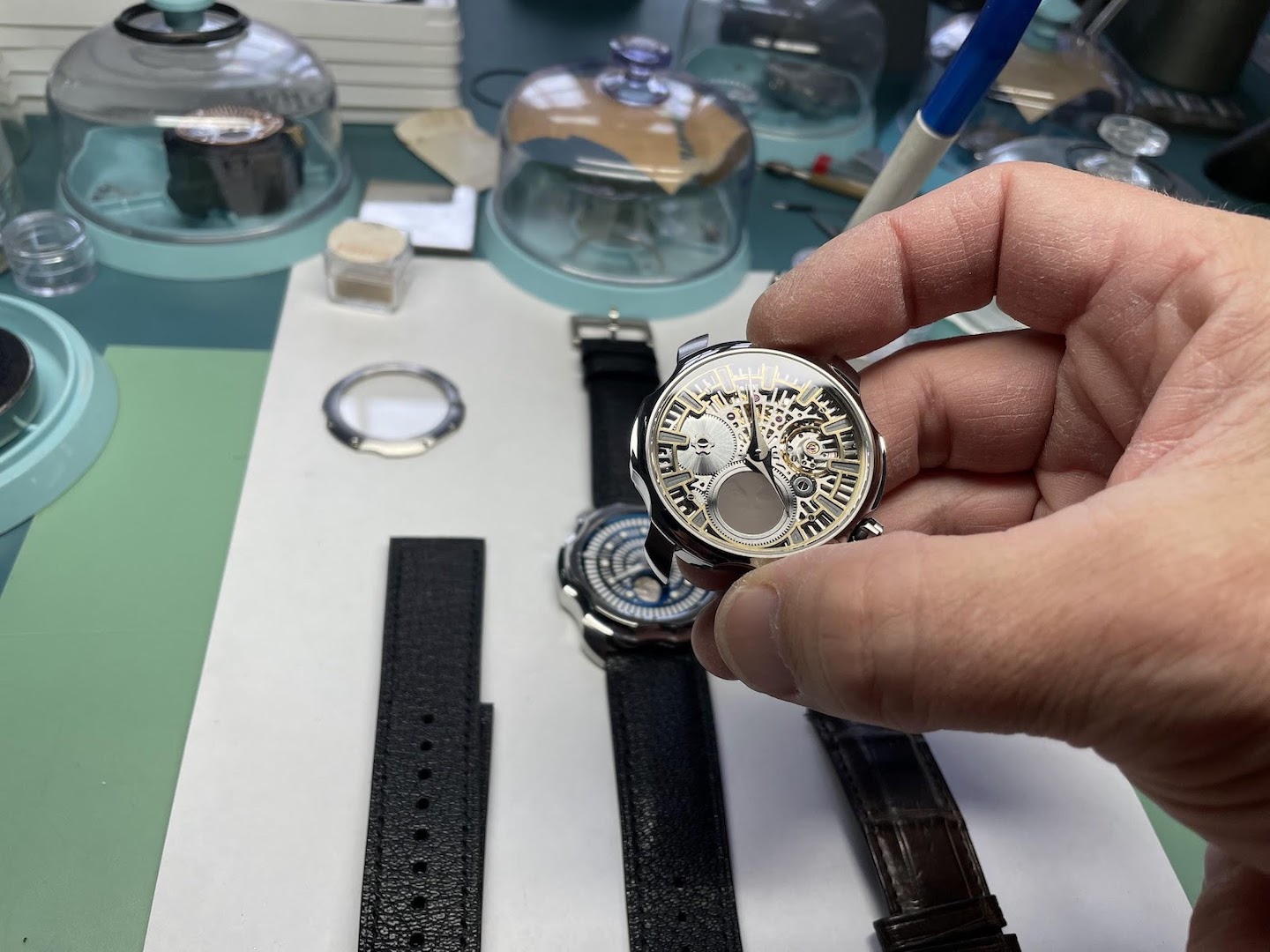 THM: You’ve got some really stark designs that speak for themselves. How does the design process work?

Stepan Sarpaneva: There was a time when we made only bespoke watches. But we have introduced designs that were easier for people to understand. We have a base watch and then we work our way to fit the customer’s needs in terms of dial colour, size, finish etc. It’s a lot of work and sometimes frustrating, because you’re working on 10 different watches with 10 different requirements. Nowadays, it’s about smaller watches and lunations!

THM: Lunations is your very own movement which makes the watches unique. What is so special about your movement?

Stepan Sarpaneva: The lunations have a moonphase which doesn’t exist on the watchface of any other brand. It is super accurate, a 1 day mistake in every 14000 years. It’s running all the time, smooth and slowly. Creating watches that are accurate and achieving it is a problem. We’ve had to create an interesting mechanism that is user friendly, that you cannot break but you also need skill sets to use it. On the back we have the scale, one line is 12 hours and then there’s the day after and day before. We make watches that work in both northern and southern hemispheres and we can turn it around. First we created the mechanism for the moon, and then the mechanism on how to make the moon work. The biggest challenge is having everything operating through the crown of the watch without breaking the watch. As you can see, the optical fiber presents the moon on the top of the dial while in actuality it is under the fiber.

THM: Are you thinking of creating more complications?

Stepan Sarpaneva: We have a lot of things going on and yes it would be nice to do more complications, the moonphase being my most favorite. The phases of the moon is really nice since it’s romantic, elegant and it’s a story. You won’t see it’s moving but it actually is. My moon always has THE face and has an emotion.

THM: Finland does have a gothic culture. Is this what comes across in your watches?

Stepan Sarpaneva: The darkness, the melancholy is ingrained in our soul. But, it is not the crying emotion. We can be happy but you cannot see it on the face. We don’t show emotions through our smiles. My father was a jewelry designer, born in 1925 and found his calling designing. He made the graphics and drawings. I see my design is somehow related to his. For instance, If I make a drawing of a round object and cut pieces off it, it starts to become like my father’s jewelry. There are many people who have tried to copy my watches but cannot get it right. At first glance, many customers have disliked my watches but they had to come back and become my customers.

I create watches as an art. My kind of watch without the thought of whether it will sell or not. Nowadays, people understand that I am doing what I want. The risk exists but it’s about where it leads you. With success, you make new watches, newer designs – so it’s important to be able to go further.

THM: You design and make your own watches. Did you ever have to change the design of the watch because of the technical difficulties?

Stepan Sarpaneva: Yes. Nowadays, there is something strange that’s happening. Talking about our latest watches, the Nocturne, I created the first design in 2012. It had a more technical feeling then. Suddenly, we found it through the Moomin watch, a new technique to do something for the Nocturne. It’s almost like an “AH” moment. It’s about the evolution of designing and finding how to do it. On a watch, we have a 35mm diameter on the dial to understand what is going on. The thickness of the Nocturne stands at 1.75mm. On a watch, if the hours and minutes are separated, it’s technically more difficult to read the time. So the crazier the dial, you have to make it easier to read. I don’t want to do something too complicated; rather make something that everyone understands.

THM: Can you shed more light on your workshop?

Stepan Sarpaneva: We have 4 watchmakers, 2 people who work for the store and a social media person. Sarpaneva is 100% my media, and S.U.F is owned by somebody else. It’s a lot of work; all the communication is through me. 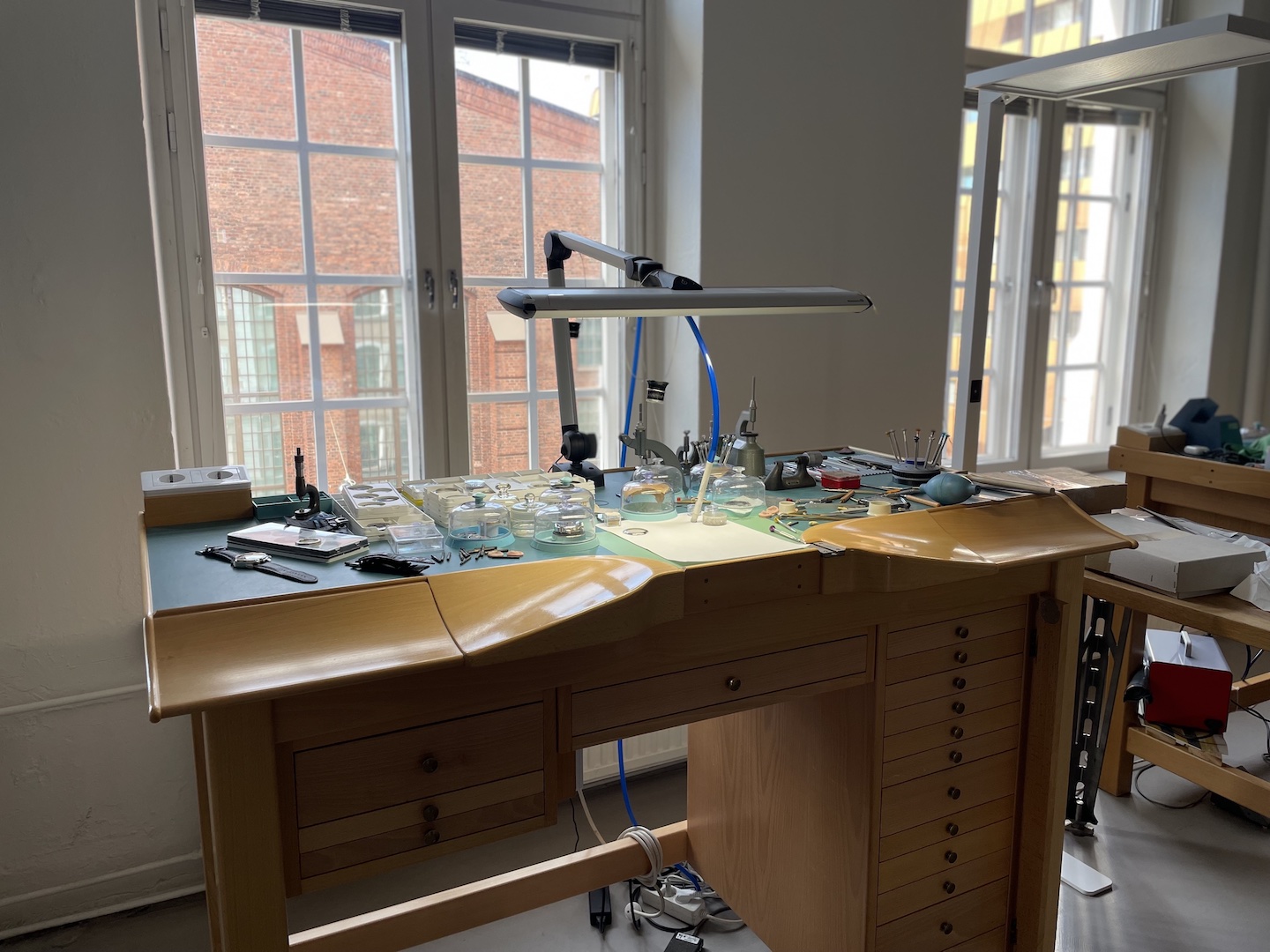 THM: You are a part of the watch industry, but don’t want to be at the center of it. Why so?

Stefan Sarpaneva: It’s not so easy. It’s good to be out of the whole system. We don’t indulge in advertising. I don’t need to be there to treat my journalists, bloggers. My world is different.

THM: You’ve worked with several renowned watchmakers. Any collaborations in the near future?

Stepan Sarpaneva: Well, I am not planning any. If they do plan, the world will be kind. Collaborations are nice but it’s a lot of work. I’m making my own collaborations like the Moomin, and we could see more like these coming.

THM: How do you wish to leave your legacy behind?

Stepan Sarpaneva: I’ve made a lot of watches for many people. My legacy is – you come here alone and go alone. In my line of work, a legacy doesn’t exist. I sold my motorcycle to start my own company and have slowly built it step by step. So that’s my legacy.

THM: You also have a distinct range called S.U.F. What was the idea behind it?

Stepan Sarpaneva: It was mainly created for the Finnish market. I wanted to create basic watches, something to enter the world of independent watchmaking. It did not work since there is no market here. But slowly, it has found its path. 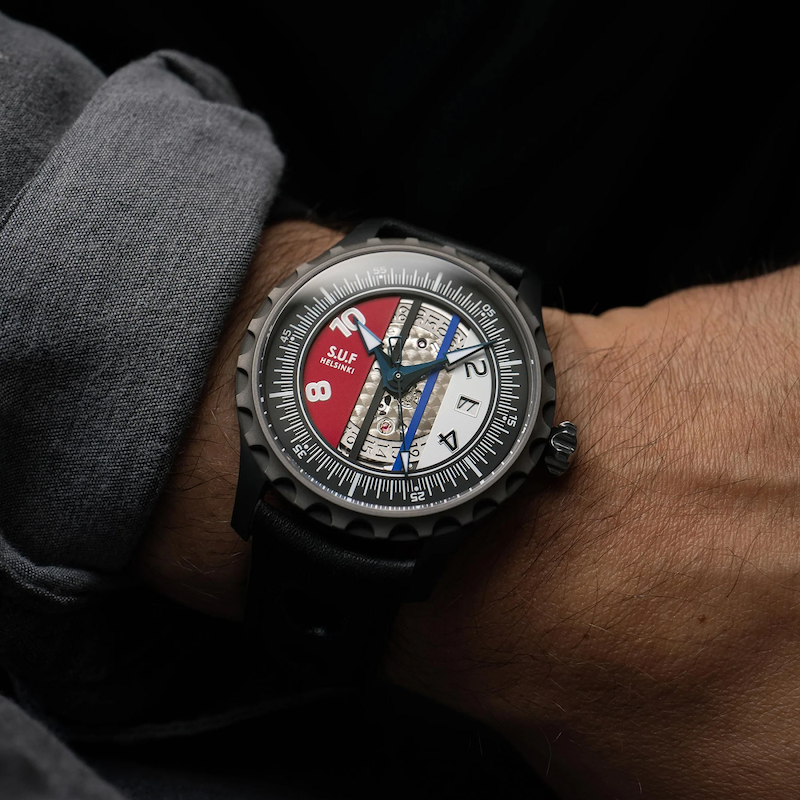 For an artist, a painting is their legacy. With every model that Stepan Sarpaneva creates, he never wants to make hundreds of pieces per year. Instead, he wants to constantly evolve the shape of his cases, the dials, and ever-complicated pieces. Well, a long kept secret is now making moves in the watchmaking world. 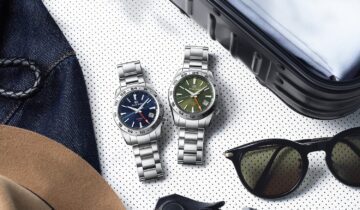 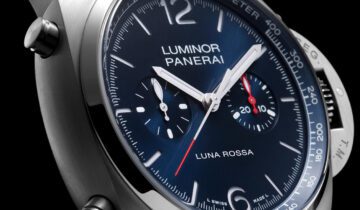