MASTERING WATERPROOFNESS: Breaking records, down under…

“We must find a way to create a waterproof wristwatch”, wrote Hans Wilsdorf in a letter in 1914, to Aegler, the firm which would later become the Manufacture des Montres Rolex S.A.

An enterprising man of vision, Hans Wilsdorf had the vision to create watches that could be worn on the wrist that their owners could count on for reliability and accuracy in their modern, active lives. Unlike pocket watches that were protected within the folds of clothing, the challenge here was to find a way to protect the watches from dust and moisture, which can cause clogging or oxidization if they find their way inside the case.

Voila! The birth of a watch with a completely sealed watch case – the ROLEX Submarine! In 1922, Rolex launched a watch that was attached on a hinge inside a second, outer case, whose bezel and crystal screwed down made the outer case watertight. Which meant that if you had to wind the watch or set the time, you’d have to open the outer case. Not the most convenient but a major breakthrough in the history of watchmaking, in 1926, Rolex patented this “Oyster case”. Why the name “Oyster”? Well, just like an “oyster,” this case can remain an unlimited time underwater without damaging its parts.

The ROLEX Oyster was the world’s first waterproof wristwatch thanks to its hermetic Oyster case. Back then, the fluted bezel on the original Oyster case and the crown had to be screwed down onto the middle case using a tool exclusive to Rolex. In following years, the architecture evolved to become more robust and reliable, the most prominent one being a rotatable bezel on the divers’ watches.

Yes diving, from mastering the art of creating waterproof cases, Rolex then went on to design and develop wristwatches that met the needs of the new deep-sea diving professionals. In 1953, Rolex introduced the first divers’ wristwatch guaranteeing waterproofness to a depth of 100 meters (330 feet). The ROLEX Submariner was born. Its rotatable bezel with a graduated insert allowed divers to monitor their time underwater, helping them manage their breathing gas reserves. The security of the Oyster case was further enhanced thanks to a new screw-down winding crown with the Twinlock system, benefitting from two sealed zones.

This principle was further developed with a third sealed zone, the Triplock winding crown and lume filled hands and hour markers. In 1954, Rolex went on to make further technical advances that rendered the Submariner waterproof to a depth of 200 meters (660 feet) and 300 meters (1,000 feet) in 1989.

One of Rolex’s most coveted watches, the sub with the date, introduced in 1969, was waterproof to a depth of 300 meters (1,000 feet) by 1979. To test the reliability of its timepieces, Rolex asked professional divers to wear their watches on their missions, afterwards gathering impressions and suggestions for ergonomic or technical improvements. This procedure became an integral part of the Rolex development process.

French underwater photographer, engineer and explorer Dimitri Rebikoff who carried out 132 dives, which took him to depths of between 12 and 60 meters over 5 months was quoted underlining the robustness of the watch, which spent many hours in seawater and received several impacts in the course of the dives.

Affixed to the outside of the bathyscaphe Trieste during the voyage into the Mariana Trench in 1960, the experimental ROLEX Deep Sea Special watch successfully endured the colossal pressure that reigns at a depth of almost 11,000 meters (36,100 feet). Another exceptional accomplishment!

But Rolex did not stop there. In the 60’s, when various techniques were developed to made extended dives at greater depths possible, the brand introduced and patented the helium escape valve. Let’s dive into the benefits of this. Around 1960, one of the new methods, designed for divers working on undersea infrastructures was “saturation” diving. A special mix of breathing gases with a high helium content made it possible for divers to stay under the sea for periods of several days or even weeks and avoid the toxic effects on the human body of pressure at great depths. It also involved keeping the divers in an environment with a pressure equivalent to that of the water at their working depth. To do this, the divers had to stay for several days or weeks at a time in a pressurized habitat – a hyperbaric chamber – which they leave only to carry out their dives. This also meant that they need only undergo a single decompression process at the very end of the mission which depending on the time spent underwater and the working depth, could take anywhere up to several days.

Now in the hyperbaric chambers, the watches worn by the divers gradually fill with helium, a gas with atoms so tiny they can penetrate the waterproof seals. During decompression, this helium remains trapped in the watch case with the risk of creating a pressure that can damage the watch or force the crystal out of the case.

In 1967, Rolex patented the helium escape valve that activates automatically when the pressure inside the case is too high, allowing the surplus gas to escape. That same year, Rolex launched the Sea-Dweller, a divers’ watch guaranteed waterproof to 610 meters (2,000 feet), and to 1,220 meters (4,000 feet) in 1978.

To further test these watches, Rolex did send its watches on various missions. In 1969 the brand partnered with the underwater habitat project Tektite in which four aquanauts equipped with Rolex watches spent 58 days below the surface. The following year as part of Tektite II, marine biologist Sylvia Earle led an all-female mission wore a Rolex watch during the two weeks spent working in a sub-aquatic habitat.

In 1967, Rolex partnered with a Canadian firm specializing in the development of submarines HYCO (International Hydrodynamics Company) where in the Sea-Dweller watches were attached to the outside of HYCO submersibles on various missions. “During all the phases of testing the watch performed beautifully.” Said HYCO after one dive of around four hours at a depth of 411 meters (1,350 feet). Commercially, Rolex introduced the Sea-Dweller Submariner with 610-metre water resistance in 1967. 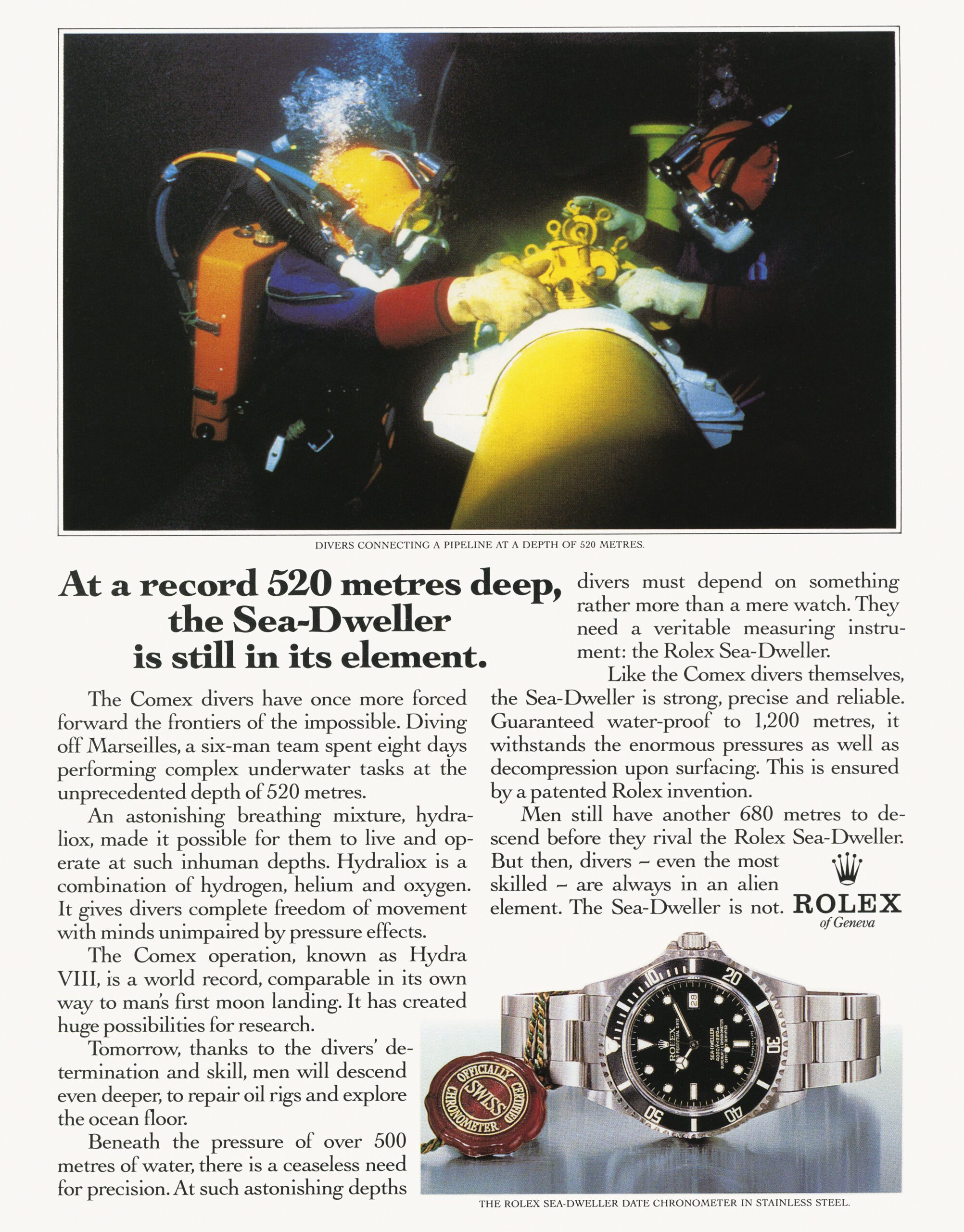 During its partnership with the French marine-engineering firm COMEX (Compagnie Maritime d’Expertises), Rolex has been involved in a number of world records. In 1988, COMEX organized the Hydra VIII expedition, during which six saturation divers descended to 534 meters (1,752 feet), setting a world depth record for open-sea diving that still stands today. All were equipped with Sea-Dweller watches. A few years later, in 1992, for the Hydra X experiment, a COMEX diver reached a simulated depth of 701 meters (2,300 feet) in a hyperbaric chamber. For the 43 days of his mission, he was wearing a Sea-Dweller watch.

In its constant quest to conquer the deep sea, in 2008, Rolex introduced another groundbreaking system that comprised a slightly domed sapphire crystal, a nitrogen-alloyed steel compression ring and a case back made from a titanium alloy that enables the watch to withstand pressure at a depth of 3,900 meters (12,800 feet) – the Ringlock system. With a unidirectional rotatable bezel fitted with a 60-minute graduated black Cerachrom insert that allows divers to safely monitor their immersion time and the Chromalight display to enhances legibility, 2008 saw the birth of the Rolex Deepsea. In is worth mentioning here that the exceptionally strong Cerachrom insert is virtually scratchproof. The colour too remains unaffected by ultraviolet rays and remains stable over time. Even the luminosity duration of the Chromalight is almost double that of a standard phosphorescent material, and the intensity of the glow is more consistent over the emission time. 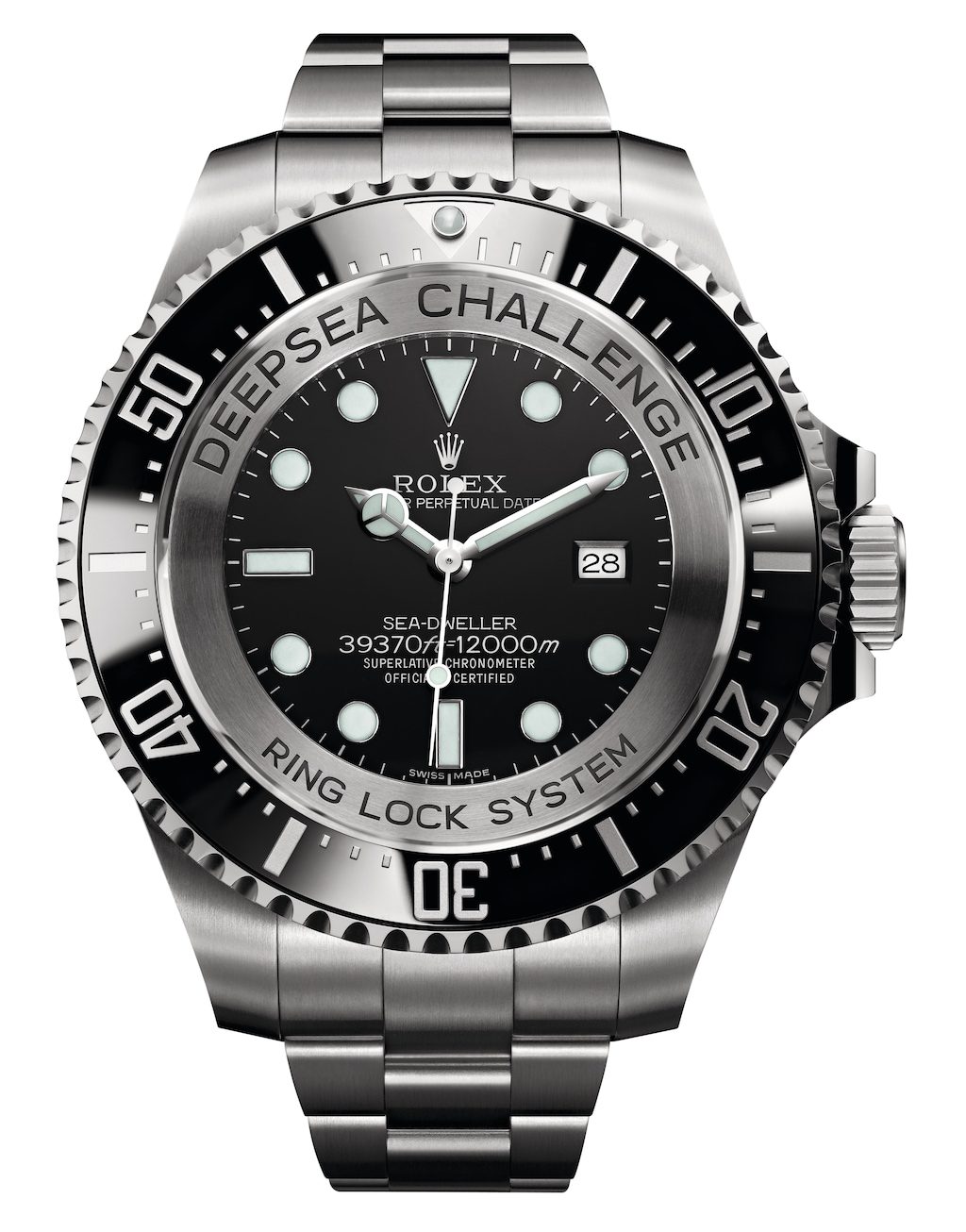 An interesting fact here is that all Rolex divers’ watches are tested at their guaranteed waterproofness depth plus an additional 25 per cent. This effectively means that a Rolex Deepsea (which is guaranteed waterproof to 3,900 meters) is subjected to the pressure exerted at 4,875 meters deep in the Rolex lab!

Pushing its limits yet again, Rolex introduced the Rolex Deepsea Challenge, where explorer and filmmaker James Cameron, descended to the Mariana Trench, the place last visited by Jacques Piccard and Don Walsh in 1960 with a watch that guaranteed waterproof to 12,000 meters (39,370 feet). This Deepsea included all of the brand’s technical innovations in terms of waterproofness and successfully withstood the pressure exerted at 15,000 meters. To give you an idea of the pressure at this depth, the Ringlock system’s central ring is subjected to a pressure equivalent to a weight of 20 tonnes!

The Evolution of the ROLEX Submariner:

2010: First Submariner Date in steel and a Cerachrom bezel insert in ceramic.

A cult favourite across the globe that appeals not just to professional divers, but all generations and genders, the Submariner has surely come a long way.  Needless to mention that the demand for the Sub today has reached new heights amongst brand-fanatics as well as horological newbies. Although it would be safe to state that Rolex is a legendary brand that sells dreams, status & quality, I would like to believe that this so called “hype” has more to do with understanding and appreciation of the essence of the icon that the Sub is. And for all those who have requested my assistance in acquiring one of these beauties, all I can say is, “take a deep breath and be patient” 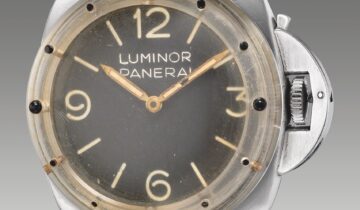 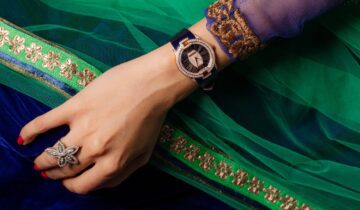 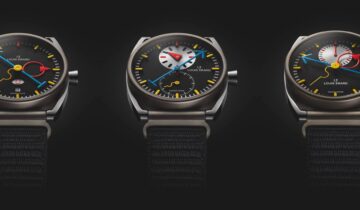