“With great power comes great responsibility,” a wise man once said. While this is true, it frequently overpowers another common theme: “A superhero watch attracts legions of lovers.”
If you’ve been paying attention to the luxury watch industry in recent years, you may have observed an unanticipated and somewhat fun trend emerging: On the dials of some of the industry’s most prominent watches, some of the most prestigious brands are paying homage to cartoon and comic book characters, reflecting not just a shared nostalgia for the idols of their youth, but also a growing willingness to take chances.

So what are the few watches that do come to mind when we say names like Batman and Hulk in the galaxy of watches? As evident as it may be, we are not referring to the GMT Master II nor are we talking about the now-discontinued bright green Submariner. Hold tight as you’re about to enter the world of superheroes! Here are our top 7 picks for superhero-inspired watches!

The Police x The Batman timepiece line is an expertly crafted blend of prestigious fashion and Police design language. The collection, which weaves together a strong and dark ensemble inspired by some of DC’s fan favourites, delivers a powerful style statement that will appeal to both watch enthusiasts and DC connoisseurs.

The timepieces, which are inspired by components of the all-new Batman movie and beautifully portray distinct entities seen in the film, are a collection of four unique watches with only 10,000 pieces created internationally. The masked vigilante known as The Batman, Bruce Wayne’s alter ego; the intriguing new rising character.

The collection includes a uniquely designed box with a half Batwing imprinted on the black outer sleeve for each design. The clock is housed in a carbon fibre 3D half Batwing casing, which slides out to complete the full Batwing design.

With a minor upgrade to their Batman Quantum, definitely, one of the most ambitious Batman Collector’s Timepieces they have created, UNDONE hops back on the batmobile with our ever so reluctant hero. Presenting The Batman I Quantum Carbon. This is a reinterpretation of another brand classic, limited to only 99 pieces.

This one is for all cinema lovers! A watch created to celebrate an upcoming film? Well well, the latest partnership between Kross Studio and Warner Bros. Consumer Products includes two new projects including a new 10-piece, limited-numbered “The Batman” Collector set and a new series of “The Batman”-themed watch rolls.

With its dark style, ultra-precise movement, and the Bat Signal symbol so famously employed to summon the Super Hero, the Kross team created a timepiece that embodies Batman. It serves as a backdrop for a central tourbillon cage shaped like a Bat symbol. The watch is powered by a new version of Kross Studio’s in-house developed and manufactured calibre KS 7’000: the mechanical hand-wound 3 Hz calibre KS 7’001, which has a 5-day power reserve.

Individual “The Batman” Collector sets (each worth $100,000 USD) and “The Batman” collector watch rolls (each worth $250 USD) are available for purchase at kross-studio.ch, as well as through official partners and approved shops.

If you were born in the 1980s, this partnership – the TAG Heuer Connected Super Mario limited-edition – should bring back some of your best memories. I’ve always been a Super Mario fan back in the day, so I was fascinated when I first heard about this connection.

The TAG Heuer Connected, as a result of this partnership, provides an exciting new approach to get more active while experiencing the pleasure of reaching goals throughout the day. This brand-new digital invention, which combines luxury and sport with amusing features along the road, wants to motivate you to get out and about with Mario, rewarding you with the joy and satisfaction of tracking your progress.

TAG Heuer’s iconic Connected watch faces have been reinvented with Super Mario special versions for this limited edition, with four dials reworked to add distinctive Super Mario elements. This heroic watch comes with a Super Mario red travel case and is only available in certain TAG Heuer shops and on www.tagheuer.com in some locations, and is limited to 2,000 pieces.

This premium superhero watch is a bold and striking choice for fans of New York City’s #1 web-slinging super hero, with a brilliant blue-and-red colour scheme and a futuristic design. This watch strikes an excellent mix between subtlety and eye-catching remarkability, with a discreet yet recognisable Spider-Man emblem displayed at the top of the watch face. This watch is especially ideal for aficionados of the original Spider-Man stories, since it has a style that is reminiscent of old Silver and Bronze-era Spider-Man comic books.

This watch, which uses Citizen’s unique Eco-Drive technology, does not require a battery and is powered simply by light exposure. This watch, which is water-resistant up to 333 feet, keeps time even when you’re swimming or bathing, and its silicone watch band and body make it a sturdy alternative that can withstand even the most intense strain.

Last but not the least we couldn’t possibly get through this list without the watch that created quite a stir in the watch world in 2021.

In 2022, Jacob & Co. collaborates with DC Comics to create a whole new timepiece. Gotham City is a batman-themed watch inspired by Jacob Arabo’s personal tastes. He, like Jacob & Co.’s CEO, Benjamin Arabov, is a lover of Batman. This timepiece is the result of intense personal participation and serves as a symbol of Batman and Bruce Wayne.

The Gotham City is aimed at a Jacob & Co. audience who are familiar with his secret identity as a playboy billionaire who is casual and has impeccable taste. In Gotham City, the duality of the comic’s character created by Bob Kane is furthered. The Gotham City 18K Rose gold edition is a limited edition of 36 pieces.

Gotham City, like the place after which it is named, is a man-made structure. Its movement, casing, and multilayer structure are all the result of a thorough and sophisticated design process. It crosses the line between aesthetics and symbolism. The JCFM10 has off-centered hours and minutes, as well as a 48-hour power backup.

The Royal Oak Concept “Black Panther” Flying Tourbillon was released in a limited edition of 250 pieces to start off the Maison’s cooperation with Marvel Entertainment. The 42mm watch features a white gold 3D picture of the titular hero on the face, as well as a purple inner bezel and rubber strap that alludes to the film’s metal vibranium. At 6 o’clock, the flying tourbillon can be seen, and the bridges, visible through the sapphire caseback, have the same Black Panther theme as the dial. A Unique Piece sold for roughly US$161,000 and raised US$5.2 million for charity.

The tourbillon cage’s modern two-tone design complements the watch’s overall aesthetics, giving the mechanism a unique 3D look. Another view of the watch’s flawless marriage of modern innovation and traditional savoir-faire is provided by the sapphire caseback.

Superheroes will always hold a special place in our hearts. With their world constantly evolving, we can’t wait to see what more the watch fraternity has in store for us this year. Rumor has it that there could be another black panther in the making… 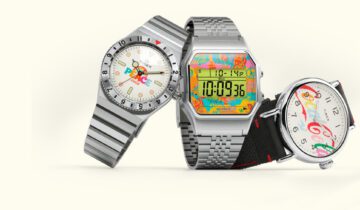 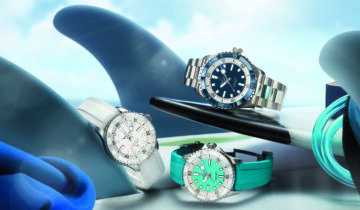 Breitling’s Introduces A New SuperOcean: A Call From The Seas