Theoretical physicist Albert Einstein once claimed, “time is an illusion”. While that is open to debate, some horologists have embraced this idea and merged it with our traditional outlook on watches. Putting their technological expertise and creative capabilities to the test, watchmakers have curated timepieces that boast unconventional (and mind-blogging) ways of telling time. Here’s our round-up of some of the most interesting and unique watches:

More than 300 high-precision components make this whimsical piece from Mb&F. The HM3 is available in two versions: ‘Sidewinder’, with cones lined perpendicular to the arm and ‘Starcruiser’, with cones in line with the arm. Each version has its own very distinct visual characteristics and each offers its own angle on telling the time. The twin cones respectively indicate hours and minutes, with the hour cone capped by a day/night indicator. An over-sized date wheel allows for large, legible numbers with the date indicated by a neatly engraved triangle on its perimeter. However, it is the spectacular open-air theatre presented by the finely finished movement, with its swinging battle-axe shaped automatic rotor and fast oscillating balance wheel, which mesmerises the eye and astounds the senses.

This watch from Christophe Claret takes telling time to a whole other level. True to its name—the eXperimental Time Research Engineering Mechanism (X-TREM)—the timepiece makes use of a magnetic field to drive time. It may sound counterproductive; after all, magnets are known to disrupt the time telling process. But that’s what the watch dispels. Two tiny hollow steel spheres are suspended in sapphire crystal tubes. They are powered by the magnetic field created by two pairs of magnets on each side of the case, attached to a thread crafted from nanofibres. The true mastery of this timepiece lies in how the magnetic field does not hamper the time function. The trick? Making the magnetic function targeted.

Urwerk is known for its innovative and out-of-the-box time displays, and the UR-210 is no exception. The sturdy and large minute hand represents the beak of a Maltese Falcon and is present in the form of a three-dimensional cage. It uses the satellite hour system, where inside of the cage, instead of an hour hand, there are rotating satellites displaying the hour. Plus, a super noteworthy aspect of this watch is the winding efficiency indicator that oscillates between red and green. When you move around and power the reserve, the indicator flashes green. However, if you sit around at your desk all day using up the existing power reserve, it flashes red. The timepiece builds a relationship with its wearer and is certainly a sight to behold.

This watch from Vianney Halter has a unique “time telling” system that doesn’t use traditional hands. There are six portholes, or apertures, bearing different digits, representing the hours in blue, minutes in black and date in red. When a minute approaches its end, the watch begins a four-second countdown. This is a mechanical wristwatch with a retro yet futuristic finish, evocative of the life of jeweller Harvey Winston. All things considered, this timepiece boasts a magical appearance that perfectly complements its one-of-a-kind infrastructure.

For those with a curiosity about the afterlife and a penchant for the theatrics, this is the timepiece. The Louis Vuitton Tambour Carpe Diem features skulls, skeletons and hourglasses. At first glance, you can’t help but admire the hand paintings and engravings, courtesy of Anita Porchet and Dick Steenman. But the truly show-stopping experience is the time telling itself. An ode to jaquemarts, the mechanism requires you to push a reptile-shaped button to commence the time-revealing process. Then, the snake’s head lifts and unveils the hour on the skull’s forehead, following which it smiles and utters the words, “carpe diem”—a call to live in the moment; it’s all that counts.

With this timepiece, you won’t have to grapple with the demands of time till you want to. Only when you activate the push button (located at 9 PM) does the time appear. Once you release the button, time becomes a secret again. Safe to say, it is innovation at its finest. This self-winding automatic watch featuring a platinum segment rotor is perfect for those who like to be in control of their hours…or just want to let go of the “illusion”.

There are so many unique watches on the market today that tell the time in unconventional ways. Whether you’re looking for a whimsical conversation starter or a truly unique timepiece, there’s definitely something out there for you. So, go ahead and experiment with some of these unconventional watches—you might just find yourself hooked on this new way of telling time! 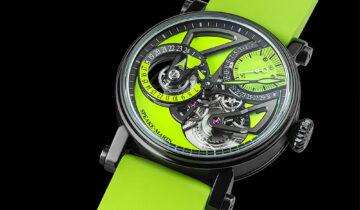 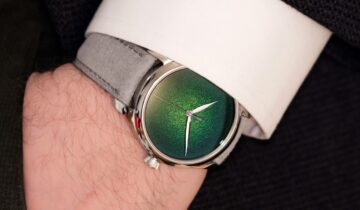 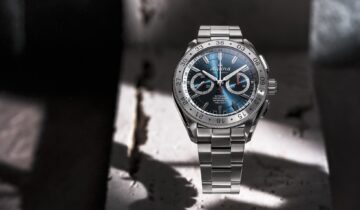