In the age of orbiting space stations, communication satellites, and rovers on Mars, there is something quite old school about a mechanical watch. Space travel can be risky and unpredictable. A mechanical watch on the other hand will continue working in all types of conditions: high temperatures, below zero, low gravity, when all computers crash and in pitch black darkness.

When building the very first Speedmaster, Omega’s design team were asked to create a sturdy high precision chronograph that would be reliable, perfectly readable and easy to use – a long and detailed list of requirements. The creation of the Speedmaster included the same protective technologies used in the Seamaster 300, such as the armoured glass, the sealing powers of the O-ring gaskets, and the famous “Naiad” crown – an incredibly rugged chronograph that was sealed against the elements and whose sealing powers extended to a depth of 60 metres. The design was also the first to feature a timing scale on the bezel! The Speedmaster CK2915 instantly changed the face of chronographs.

Around five years after its launch, the second generation speedy’s caught the eyes of astronauts Walter Schirra and Leroy Gordon who then wore their privately owned watches ref CK2998 on their Mercury programme flights.

Towards the end of Mercury, the astronauts approached Operations Director Deke Slayton asking if NASA could issue them an official watch for use during training sessions and ultimately while flying. In September 1964 Deke issued a memo stating the need for a “highly durable and accurate chronograph to be used by Gemini and Apollo flight crews”. Of all the brands contacted, only four responded and James Ragan asked each to supply three watches, one of which was the Omega Speedmaster Ref ST105.003.

Finally, after enduring all these tests and still ticking away precisely, in 1965 NASA declared the Speedmaster as “ Flight Qualified for all Manned Space Missions” and just three weeks later it went into space for the first time on the wrist of Virgil Grissom and John Young for the Gemini 3 Mission. Later that year on 3 June 1965, Edward White wore his Speedmaster on America’s first spacewalk for the Gemini IV mission.

But it doesn’t end there. On 21 July 1969, Neil Armstrong stepped off the “Eagle” to become the first human to stand on the moon. Fifteen minutes behind him was Buzz Aldrin and the Speedmaster Professional became the first watch worn on the Moon.

Nobody onboard or on ground could have anticipated the drama and near disaster that lay ahead. Days after its launch an oxygen tank exploded on board, crippling the Service Module, plunging the astronauts into a perilous situation. Aborting the mission, the most important task now was to get home safely. Now part of the rescue strategy was to move the astronauts into the Lunar Module. However, this craft was not supposed to support so many people for such a long duration. Hence to conserve energy, the crew shut down nearly all power, rendering their digital timers obsolete, leaving the astronauts at the mercy of dark and freezing conditions.

After facing several challenges over the days, Omega’s Speedmaster proved its worth in a spectacular fashion. Because the mission had drifted off-course by roughly 60 to 80 nautical miles, the module would now have to re-enter Earth’s atmosphere at the wrong angle and bounce back into space with no chance of recovery. Hence the crew were compelled to readjust the course of the craft manually with an exact 14-second fuel burn. No room for error. With the digital timers being down, Swigert used the Speedmaster chronograph to time the burn as Lovell guided the craft using the Earth’s horizon as his guide. This unique manoeuvre worked and finally on 17 April, 142 hours and 54 minutes after its launch, Apollo 13 landed safely. Omega has performed and delivered as intended!

As a mark of gratitude for its contributions to the success of human space flight missions, the space agency presented Omega with the “Silver Snoopy Award”, Snoopy being NASA’s unofficial mascot because of his abilities to keep calm in serious situations.

An Essential in NASA kits

In 2021, Omega and NASA teamed up to create a velcro strap with astronaut-friendly fixtures and NASA’s famous planet-shaped insignia in red, white and blue which was released in 1959. Nicknamed the “meatball” the logo captures the space age optimism of the mid-twentieth century.

More than 50 years later, the Speedmaster remains flight-qualified by NASA and an essential part of astronauts’ kits. Being the ultimate space watch, we wonder what is next for Omega. Mars? Well if NASA is making the journey, I’m sure Omega will certainly join the ride.

Now with all due respect to the Speedy, not all enthusiasts are attracted to the classic design of the watches. Omega’s answer to this – the Speedmaster 57’s launched in 2013. However, given that the watches did have some room for improvement, this year Omega launched smaller, sleeker and more refined hand wound versions of the Speedmaster 57, attracting a whole new genre of Speedy fans! 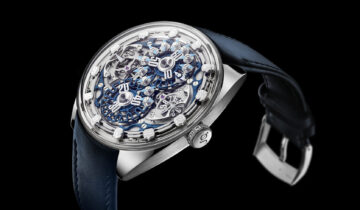 GENUS: Swiss Watch-Making At Its Finest 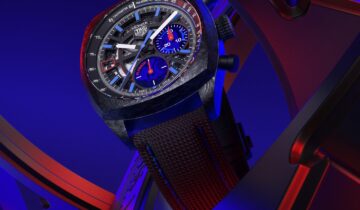